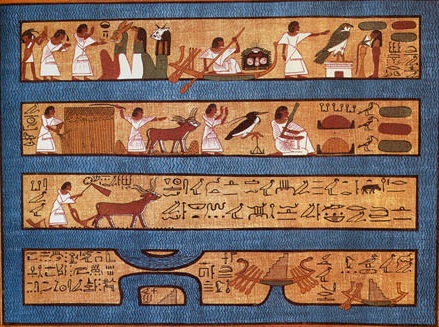 “There was a time we did not walk the earth. A time when our nascent essence flowed, undifferentiated, in the Source of Being. We were not Gods, but were of God, the strands of our existence not yet teased apart by Becoming, our function not yet defined.

The desire of the Source for movement and growth, It’s longing for knowledge and experience set in motion great currents in the endless sea of Possibility and from the Infinite we Became. Crystallised from pure Potential, our function defined and defining our very nature, we waited to be called into Life by the needs of Man.

When they called us, we came. Were we created by their desire for us? Yes, in a way. They created the Forms we chose to indwell. But our Essence is eternal and holds its own Truth.

We have borne many names and many faces, my family and I. All races have called us after their own fashion and we live their stories for them, bringing to life the Universal Laws and Man’s own innermost heart. We have laughed and loved, taught and suffered, sharing the emotions that give richness to life.

We are both limited and Limitless. The forms Man gives us set the bounds upon our function, yet our own nature knows no limitation. As Man has evolved, the forms he chooses for us have grown. No longer are we tied to a single tree or hearth, chained to an obscure altar. Now we play among the stars as the vision of Mankind opens, at last, to the Infinite. One day Man will finally see that we are closer than kin.

But for now, I will share a chapter of my family’s story. One that has survived intact through the millennia, known and remembered still, across your world. Carved in stone, written on papyrus, I will tell you of a time when my name was Isis.”

This story features in

In forgotten ages, the stories tell, the gods lived and ruled amongst men. Many tales were told, across many times and cultures, following the themes common to all mankind. Stories were woven of love and loss, magic and mystery, life and death. One such story has survived from the most distant times. In the Two Lands of Ancient Egypt a mythical history has been preserved across millennia. It begins with the dawn of Creation itself and spans one of the greatest stories ever to capture the heart and imagination. Myths are, by their very nature, organic. They grow from a seed sown around a hearthfire, perhaps, and the stories travelled the ancient highways, embellished and adapted with each retelling. Who knows what the first story told?

In this retelling of the ancient story it is the Mistress of all Magic herself who tells the tale of the sacred family of Egypt.

Available on Kindle and in Paperback via Amazon UK, Amazon US or your local Amazon site.

7 thoughts on “A story of ancient Egypt”