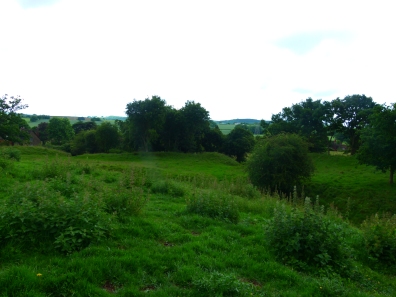 Whatever the reasons, we re-convene on top of the man-made-conical-mound which hides behind the Church of St Nicholas, High Bradfield and Wen has an interesting take on proceedings.

“If St Andrew of Scotland is Andrew the Disciple of Christ then he may have come over here with Joseph of Arimathea.”

“And remember at that time there was no Scotland. Scotland was North Albion!”

“Why did they come here?” says Ned.

“If we knew that for sure, we’d probably all be millionaires,” I say wistfully.

“Not necessarily,” says Ned, who may already be a millionaire for all I know. “After all this time, nobody is really all that interested.”

“It would still be nice to know though.”

The Call of Albion

And then a still silence descends

Upon our three-fold gathering

And we look out to the far horizon

Each of us from a slightly different angle

To where the mists are gathering form

And preparing to roll in to greet us one and all…’

6 thoughts on “Found Mounds: the Call of Albion…”