Well no, I didn’t answer your question…. I thought it was rhetorical. I really should have known better, shouldn’t I? I gather you have something in mind and I’m assuming we are not drawing on specialist knowledge here but simply looking at the images as one would take a seed thought for a meditation… starting from scratch, as it were?

So… “Were I to ask you for example why the four holy creatures are used to symbolise the four evangelists…without recourse to books or internet… what would you say?”

For a start I would look at the simple fact that there are four… and Revelation mentions the Four Holy Creatures… no, it was four Living creatures, if I recall, which has to be significant. They are described as the now traditional figures of Man, Calf, Eagle and Lion and said to have wings covered in eyes, yes? And they sing the praises of God… doesn’t it say something about the praises of the Creator and One who is to come? So, as symbols of the Evangelists, who ‘sing the praises’ of Jesus and His ministry, that would tie in nicely as they themselves ‘reveal’ the message. 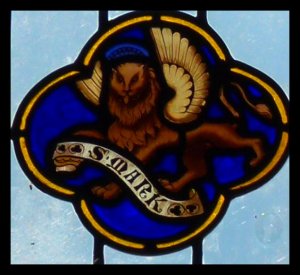 I wonder when they became so associated? It has to be after the Books that are now part of the standard New Testament were decided upon… There were more than four Gospels originally, as we know…

I would then look at other ‘fours’… the seasons and cardinal points, for example and the geometric form of the square… the firm foundation. (I would probably digress at that point and wonder whether the square fits within the circle, or the circle in the square and that fact that both can be true and what that suggests… and wander down further tangential and triangular pathways…)

I might be able to drag my thoughts back and tie the Four to the Qabalistic worlds and alchemical Elements which are also associated with the Creatures. But that implies specialist knowledge, so I could simply look at the pictures and contemplate the character of each Gospel to see where that led. But I don’t know the specific tenor of each of the Gospels well enough by heart… and anyway, we are supposed to be looking without prior knowledge.

So I would go back to the image and simply look. What are the images trying to say? The creatures are all winged… a higher aspect of whatever they are trying to depict, then.

Mark as the Calf… sacrifice? Service? It is a domesticated animal, so maybe obedience? They are all Christian virtues… where does that lead? Luke as the Lion…strength, fierceness…the fire of passion… then lift it higher to dedication? Matthew… a winged man; the higher intellect… to lift the mind towards something more than logic and reason, perhaps. For me that would suggest Gnosis. John as the Eagle… taking flight, like the soul, into the Sun…

So looked at thus simply, the images themselves become a guide book of Christian virtue, showing how to be raised from the bestial on the wings of faith to their symbolic heights.

And having answered your question, O Feral One, you, no doubt, will distil all that into a single, elegant phrase…

The other Beast, meanwhile… whom I’m sure has a place in the 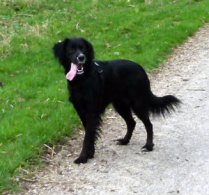 Apocalyptic vision even if there is a shortage of horns… is demanding a walk, freezing or not.