Yes, there are a few churches around Northamptonshire we need to see, I think, let alone St Albans, Roman or not. It can’t all be Roman… in fact, the St Michael’s church there is Anglo Saxon and dates from the early 900s apparently. There is a rather unusual monument there to Francis Bacon too; for all the conflicting accounts of his personal life, the writer of ‘New Atlantis’ is an interesting character. “Thou, O Father, who gavest the visible light as the first-born of thy creatures…”

I got to the bottom of the ‘Mary’ in the window of the church at North Marston, by the way. I knew who it was too, just couldn’t think of the name… largely because it isn’t a Mary at all… it is Tabitha/ Dorcas… we’ve met her before… our ‘gazelle’.

Odd you should mention that the sculpture of St Dunstan reminds you of the St Michael and the Devil at Canterbury… Dunstan was Archbishop there you know. Having looked, I can’t find the name of the sculptor of the Risborough piece, though the style differs a fair bit from the Epstein. On the other hand, they both reminded me of the ‘green man’ from the cathedral church in Sheffield.

We can now speculate on whether the mythological interpretation of the Devil renders him a Giant. When you think of the truly ancient sites, many of them have old stories associating the stones with giants… or the Devil. If they represent the quashing of paganism by early Christianity as we discussed, then it would be very easy for the transition from giant to devil to be made in the folk record, wouldn’t it? 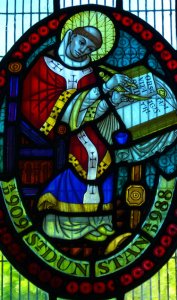 We do seem to be stumbling back across many of our earlier themes… including the holy wells which appear to have cropped up an awful lot more than usual lately. Ever since we visited Holywell in fact… even though we missed the one at Aspatria. Not surprising really when you consider how many of them sprang from the planting of a staff or the passage of a cephalophore… 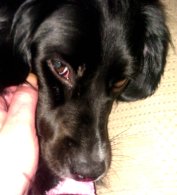 Wen and the Questing Beast x