“Oh, Thou, who Man of baser Earth didst make,
And who with Eden didst devise the Snake…”

It’s this whole Tree thing. It’s bugging me. In Genesis, we have the Tree of Knowledge of Good and Evil, which, if the newly created Adam and Eve should eat from it, they are told ‘they shall surely die’.

Now according to my research, using the opposing terms ‘good and evil’ is a classic device to imply ‘everything’… the two extremes and all that lies in between. So Adam and Eve are warned that to eat from the Tree will result in their deaths… which sounds more like a Universal Gnosis and Initiation to me. Especially when you look at the same story in the Qur’an, where Satan tells them that they will not die, but will become as the Angels… which fits with Genesis 3.22 “And the Lord God said, Behold, the man is become as one of us, to know good and evil…”

Add that to the Tree of Life, “lest he put forth his hand, and take also of the tree of life, and eat, and live for ever…” I’ve said it before. There’s more in this passage than meets the eye.

So, I’m not so sure you have to follow the Qabalistic route for the interpretation of the Twin Trees of Life and Knowledge. You could, but I’m thinking geometrically … Yes, I know that is usually your domain. You must be contagious. And I’m probably way off the mark…but…

…from the apex of the Triangle, where the Trees are but Two of a Garden that is One…. But Three must result in Four. So, maybe dimensionally then, where Two … or rather, the essence of Two ‘fall’ from the central One… in which case our tetrahedron is missing a Scion of Eden.

Then, you would probably have to mirror the tetrahedron, and as image and mirror cannot be separate, you end up with the hexagram as the Merkabah … Which brings us back to the Chariots and the Four Holy Creatures… and the Four Worlds… and back to the Qabalah again…

Or maybe I need the Seraph with the Flaming Coals… 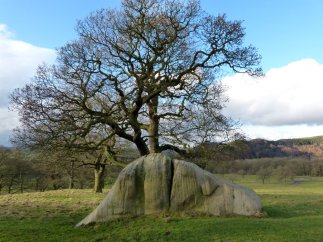 And I’m very well aware that none of it makes much sense on paper… it does in my head. Maybe it should have stayed there… or maybe I need more coffee…

The wind is howling here tonight. It really sounds like a wild beast out there… you can feel the energy of life in the world. I love the wind when I’m outdoors, as you know. Indoors, somehow it becomes more threatening… as if being out of the dragon’s breath, incarcerated in concrete, leaves us vulnerable.

There is a metaphor in that, but I may have fried my brain with the geometries.

The Beast has no such problem. Wind and thunder equals aerial intrusion and requires vocal retaliation, even from one who is, to all intents and purposes, not very well.

Though the appetite for tuna, chicken and tennis balls hasn’t diminished!