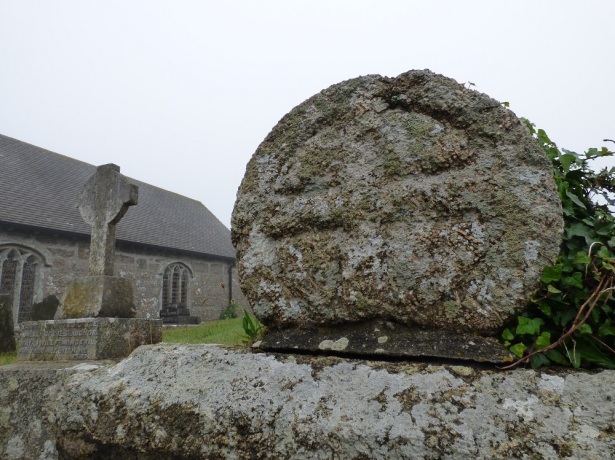 We were sorely in need of grounding after our visit to Boscawen Un stone circle and set off in search of breakfast. Okay, second breakfast. Land’s End… now a tourist attraction rather than the end of the land… was full of visitors and wreathed in, if possible, even thicker mist than the day before. There seemed little point in paying to park there if we would barely see the edge of the cliffs, let alone beyond them. As it was a little later than the previous day, we tried the First and Last Inn… but we had no better luck there either. It was still closed. I remembered a little café that we had passed on a back road, so we headed that way, catching a glimpse of crosses in the churchyard of St Sennen’s. That would have to be our next stop. 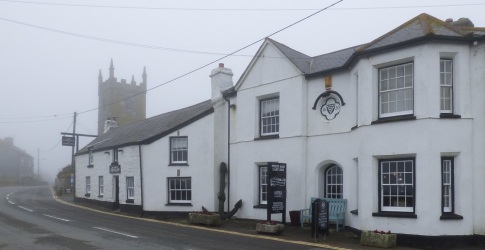 Duly fortified with a breakfast that would serve us as both lunch and dinner too, we returned to the church to explore. The sea-mist had settled around the tower, hazing everything with grey. The sign proudly proclaimed that the church had been founded, by St Sennen himself, in 520 A.D., though, as the church admits, ‘the identity of the saint himself is a bit vague.’

Sennen is thought to be the St Senan who was born near Kilrush in Ireland in 488 where he founded a goodly number of churches. The story goes that he visited Land’s End on his way to Brittany and founded the little church en route. The faith in this area is Celtic Christianity, the Ionian faith of St Columba, rather than the Roman variety imposed after the Synod of Whitby in 664; Cornwall goes its own way… it has its own distinct identity and in everything except legal terms, is more another country than a county. 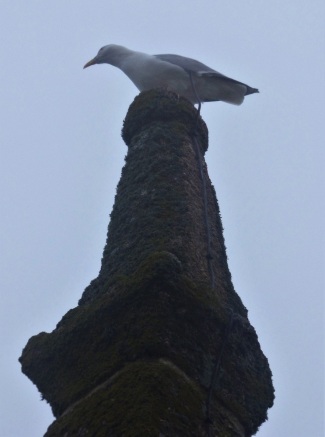 The current building bears no trace of the original church, except, perhaps in the wayside crosses within its churchyard… and even they are not supposed to be there. A Rector of the parish in 1878 thought, for some reason, that all the crosses should be collected and erected within the shadow of the church. Only two now remain… it seems that he was ‘encouraged’ by the locals to put the rest back where they belonged. I approve of that; such stones were erected where they stand for a reason.

The church is under the patronage of His Royal Highness, the Prince of Wales, who is also Duke of Cornwall. That title has its place in Arthurian legends which tell that Gorlois, Duke of Cornwall, was the husband of Igraine, the lady desired by Uther Pendragon. Gorlois, to protect his wife, rebelled against the king and was killed… and Uther took both Igraine and Gorlois’ castle of Tintagel, where their son Arthur was born. 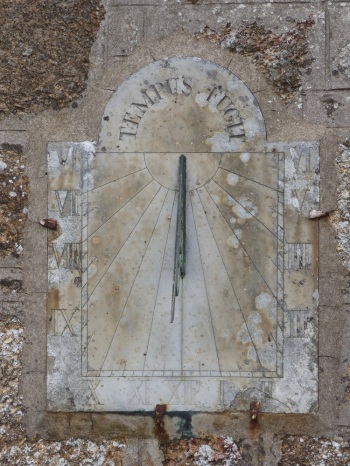 St Sennen’s is mediaeval. Parts of the nave and chancel are still the original thirteenth-century stonework, but most of the building dates to the fourteenth and fifteenth century… with the inevitable Victorian ‘restorations’ throughout. The church was dedicated to its saint in 1327, re-consecrated in 1440 and the Victorian works were undertaken in 1867. Just to confuse matters, a Latin inscription on the base of the thirteenth-century font inside the church assures us that it was dedicated in 1441 on the Feast of the Beheading of St John the Baptist. The information given on the church also points out the sealed north door, used during baptisms to let the devil out… and suggests that one should be careful where one stands at a baptism as ‘the devil now has only one way out!’ Perhaps the sea-borne tragedies it has witnessed encouraged the little church to develop a wry sense of humour to preserve its sanity. 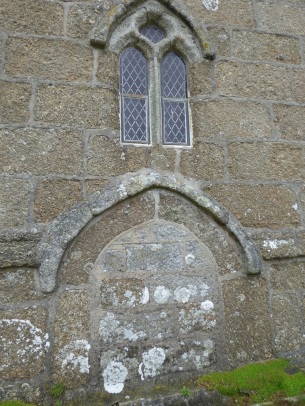 The sea is never far away… a mere stone’s throw from the church. Many of the memorials in the churchyard and within the church speak of those who were lost at sea. One stone tells the story of Mary Sanderson. Her husband, Samuel, was the captain of the New Commercial, sailing from the Mersey to Jamaica in 1851. The ship struck the Brisons during a gale and the captain, his wife and crew were overwhelmed by the mountainous waves. Most were lost to the sea or dashed against the rocks. Only one member of the crew managed to gain the beach at Sennen, clinging to broken timbers. Mary and Samuel were cast up on the Brisons… the rocky islets whose name means ‘the breakers’. They were cut off, marooned for two days and nights, while local fisherman and even the revenue cutter Sylvia tried to rescue them. Finally, the rescuers managed to get a rocket line across to the couple and Mary, wearing only her nightdress, crossed on the precarious line, through the raging, gelid sea… only to die before reaching the shore. She was thirty-four.

Samuel was rescued later that day and he buried his wife in the churchyard at Sennen on 19th January, 1851. In recognition of the gallant efforts of the rescuers, the National Shipwreck Institution (now the RNLI) awarded medals to many of those who had tried to help. Even tragedy may be turned to serve a greater good; Mary’s unwitting legacy still serves the area, its people and the many visitors who come to these shores. In 1853, the first of many lifeboats arrived in Sennen, in recognition of the “…gallant conduct of Coastguards and fishermen of that place.” In 2011, to honour Mary’s own courage and her inadvertent gift, the Cornwall Coastwatch renewed her gravestone.

Every gravestone tells a story, though the stories may have vanished from memory. But this little church that has seen so many tragedies is not a place of sadness, but of inclusiveness and warmth. There are rabbits amongst the stones, birds on the pinnacles and swallows nesting in the porch… it is a place where nature is as welcome as the people. We just hoped the door would be open…