It had been an incredible morning, starting with the magic of Boscawen Un, our visit to Sennen church and then the long walk to Carn Lês Boel and back. Still flying from the experience, we felt in need of grounding and liquid refreshment and as, by this time, we were long past noon, we knew that the First and Last Inn in England would be open. It’s a curious place; while definitely geared for serving the tourists and the road, it is also the ‘local’ pub for a good many villagers and the two atmospheres meet and meld very well. We sort of had to go there, being in the area.

The inn was originally built to house the masons working on the ‘new’ church next door, which was completed by around 1430. The current building still dates in part back to that time, though most of the pub is housed in later additions to the inn. Today, it is one of the best-known inns in Cornwall. Not just because of the fact that its name is accurate… it really is the first and the last inn you come to at this westernmost point of England… but because it has a rich history, with plenty of legends attached. 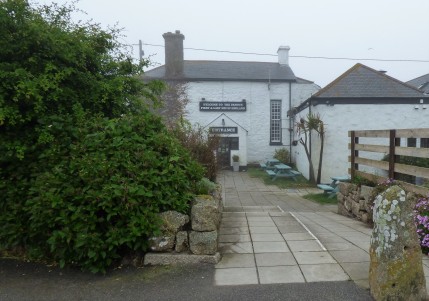 Sennen was a centre of the ‘free trade’, better known as smuggling. Import taxes on goods such as brandy and tobacco were high and enterprising seamen brought such goods into the country by less than orthodox routes, avoiding the excise men and thus the import duties. Cornwall was also once known for its ‘wreckers’, who lit lanterns on the cliffs to lure unwary ships into dangerous waters so that the wreckage could be combed for valuable cargo.

The First and Last Inn was a haunt of both smugglers and wreckers. Its stable rooms, now used for holiday accommodation, once housed the donkeys used in both of these operations and tunnels were dug beneath the inn in which the smuggled and salvaged goods could be hidden. One of them is visible in the bar of the inn; Annie’s well.

The well is named after Annie George, who, two hundred years ago and with her husband, Joseph, ran the inn as rent-free tenants of a local farmer, who rejoiced in the name of Dionysius Williams. The couple paid no rent in exchange for their silence on Williams’ other source of income… smuggling. The couple decided they wanted a greater income themselves and decided to blackmail Williams who retaliated by throwing the out of the inn. Annie went to the authorities and turned King’s evidence. Williams was convicted and sent to prison and the smuggling operations in the area, and thus the local economy, suffered a severe blow. Regardless of the judgements we may make on the morality of smuggling and wrecking, they were an integral and necessary source of income for many families in this isolated and impoverished area.

Annie also gave evidence at other smuggling-related trials, including that of her brother-in-law, John George, who was convicted and hanged for his crimes. Annie earned the hatred of the local people, but legends tell that they took their revenge in a gruesome manner, staking her out on the beach as the tide came in. Entangled in the fishing nets, the water took her and she was drowned. She could no longer speak against the locals… but that was not the end of her story. 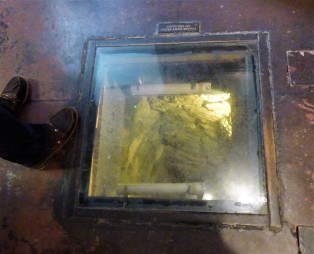 Her body was brought back to the inn and she was laid out in one of the rooms there before being buried in an unmarked grave in the grounds of the church next door. At least, her body was buried, but her ghost remains at the inn.

Although many old inns have the obligatory ghost or two…especially in tourist areas… Annie’s ghost has been seen and reported by many people…and not a few cats who have been found locked away in drawers and cupboards. The grey form of a woman is often seen on the landing of the inn and the chill touch of ghostly presence often reported. I often wonder how we know what name to give a ghost…how can we tell if it is this person or that in any given location, when so many must have died throughout the centuries. Here, though, the case is clear, as those who sleep in Annie’s room report dreams of being drowned or pulled down by fishing nets…

Be that as it may, we too left a ghost of our presence there, for it was the last place we saw the copy of The Sun and the Serpent that we had brought with us. We were still far from grounded when we left the inn and must have failed to pick it up after looking at Hamish’s picture. Food helped… while we were still in Cornwall we had to have a proper Cornish pasty and that took us back into St Just for the final time. Then we would have to hit the road and begin the long drive home… but there were still a number of places we wanted to visit on the way, including one of Cornwall’s most iconic stones…

12 thoughts on “A Thousand Miles of History XXVIII: A Haunt of Rogues…”