Our hotel the previous night had been just off the main highway across Bodmin Moor… a perfectly good modern road that would take us where we wanted to be by a fast and direct route. We were never going to take it… not when we might explore obscure hamlets, narrow country lanes and a plethora of places by which we could get sidetracked. The first of these we had noticed while checking the start of our route; a tiny village with an intriguing name. We felt obliged to explore…

Even by our standards the road we took was a little primitive and we were obliged to stop on several occasions while a ewe convinced her lambs that roads are not always the best places to play and sunbathe.

It was not far to Temple, a tiny village off the beaten track and seeming quite remote from the world. The village takes its name from the hospice founded here nine hundred years ago by the Knights Templar, to offer accommodation and protection to pilgrims travelling across bleak Bodmin Moor en route to the Holy Land. In 1314 the hospice and lands passed into the hands of the Knights Hospitaller after the Templar Order had been accused of heresy, tortured and slaughtered at the instigation of Phillipe le Bel, King of France, who owed the Templars a considerable amount of money.

The village remained in the hands of the Hospitallers, the natural heirs of the Templars, until King Henry VIII broke with the Church of Rome and suppressed the religious houses five hundred years ago.

Today the village is part of the parish of Blisland, the origin of whose name baffles scholars but which to me suggests simply that it might echo an ancient tradition that this was a blessèd land and, in the care of the Templars, an outpost of the Holy Land. 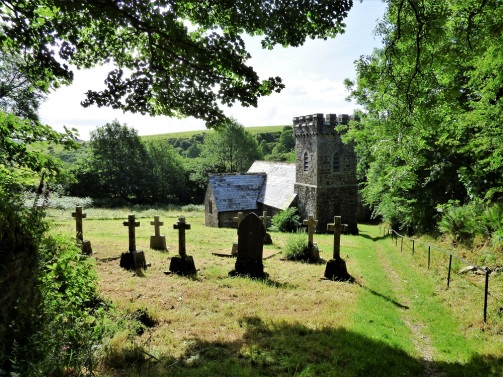 The Templar’s own chapel is no more, having fallen into ruins after their suppression. The current church, dedicated to St Catherine of Alexandria, was built upon the site of the old eleventh century chapel. Although the fabric of the church owes much to its predecessor, what remains above ground is almost entirely Victorian, though there are many traces of the more ancient building to be found and many references to its Templar history. 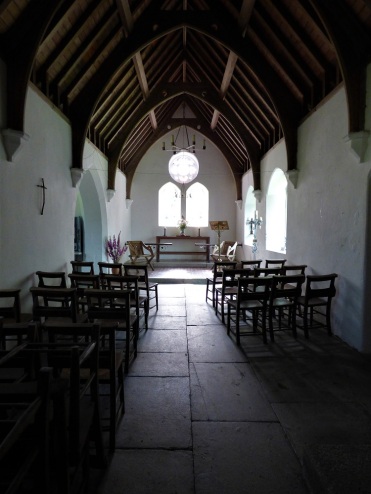 For many years St Catherine’s was famous as a place where runaways could marry without banns or license. In 1584, writer John Norden called it “a lawless church where many bad marriages are consummated and where are wonte to be buried such as wrought violent death upon themselves”. Until fairly recently, those who took their own lives were condemned to be buried in unconsecrated ground. The ‘lawlessness’ continued until 1744, when the church finally came under the wing of a bishop.

For a hundred years, no services were held in the little church and it fell once more into disrepair. An ash tree, growing up through the floor was the only worshipper to raise its face to the light. In 1883, Cornish architect Silvanus Trevail restored the little church, incorporating what he could salvage of its earlier history into the stonework. An outbuilding beside the porch reuses the carved symbols of the Knights Hospitaller, a wheel-head cross and other relics of the Templar building. 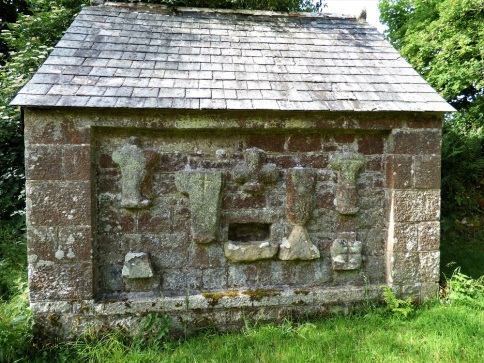 In AD 451 the Archbishop of Jerusalem was made a Patriarch and granted the use of the Patriarchal Cross, one of which can been seen incised into one stone of the outbuilding. The Knights Templar were later granted permission to use this cross and Godefroy de Bouillon, Duke of Lorraine, used the Patriarchal Cross on his standard during the First Crusade, capturing Jerusalem and being granted its crown. It is from him that it derives its other name, the Cross of Lorraine.

Inside the church, the base of the Norman font was restored and placed as a gift by a local lady. The original base of the font was later found buried nearby and set into the wall above the church door.

Many of the artworks and artefacts were gifted to the little church as it was reborn from ruin once again. That sense of community is one the Templars would have recognised; the wealthiest Order on earth in their day, each Knight took a vow of poverty and many of their symbols, including the iconic knights sharing a horse, reflect their dedication.

St Catherine, her hair unbound to signify her dedicated maidenhood, holds the palm of the martyr and stands beside the wheel upon which she did not die; in spite of popular legend, the wheel burst asunder when she was placed upon it and she was beheaded when all their attempts to kill her had failed.

St Francis of Assisi, surrounded by the birds to whom he preaches and with the stigmata clearly marked on his hands and feet, watches over the quiet and peaceful church. 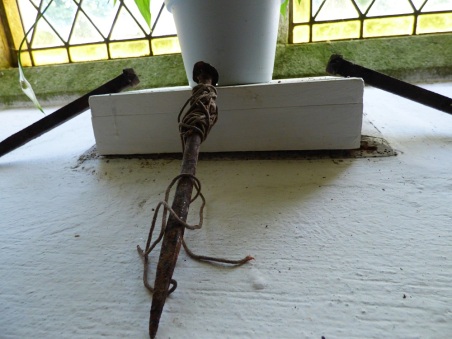 On a more disturbing note, three huge iron nails sit on a windowsill… a reminder of the torture symbolised by the stigmata.

The stained glass holds themes dear to the hearts of the Templars too, and includes their cross pattée above the altar and a rare image of a mounted Templar in a tiny geometric window within the tower.

There is a sense here of much that is hidden just beneath the surface. Stones concealed by plaster and whitewash, symbols that hint at a deeper knowledge, stories almost forgotten… We were glad to have come, feeling somehow that we were bearing witness to a past of which we knew little, but which wanted to be heard.

In this place, the bodies of those for whom life had proved too much to bear had been given a place within the embrace of their god. Here too, those who loved in spite of opposition from the world had been joined in His sight. The politics of the exoteric Church had taken a back seat and a simple message of Love had won the day. Furnished with gifts from its congregation, decked with fresh flowers from village gardens, even today, there is something about the little Templar church that embraces the spirit, not the letter, of its faith. 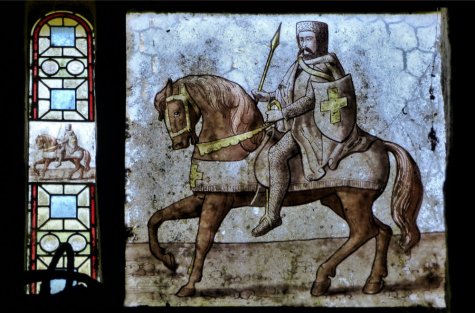 8 thoughts on “A Thousand Miles of History XXXV: The Templars and the Lawless Church…”