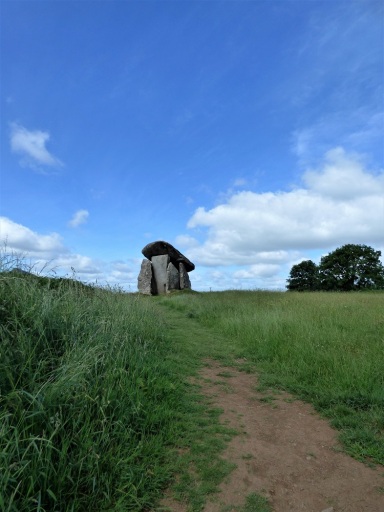 Our next stop was only about half an hour’s drive from the Templar Church, and the road took us through the silent green of Bodmin Moor. With a long drive still ahead, I restrained myself, albeit barely, from turning aside at every interesting signpost, but I was determined to see one of Cornwall’s finest burial chambers… Trethevy Quoit.

The name, Trethevy, is thought to derive from the old Cornish for ‘place of the graves’. The locals call it the Giant’s House and there are tales of giants playing games with the stones. It has another name too, King Arthur’s Quoit, though I have been unable to find any reason why the legendary monarch should be associated with the place. The area, though, is rich in Arthurian sites, from his birthplace at Tintagel, just a few miles to the west, to King Arthur’s Hall and his Bed on Bodmin Moor… and Dozmary Pool, where the Lady of the Lake gave him Excalibur and to where it was returned on his death. 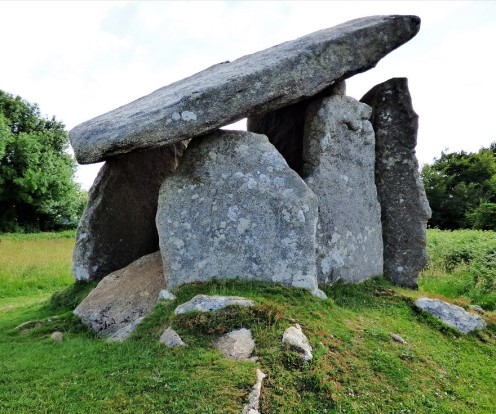 Since beginning our workshop only six days earlier at Cadbury Castle, one of the main contenders for the site of Arthur’s Camelot, we had been falling over references to King Arthur at every turn. Even at St Michael’s Mount there are tales of him battling a giant. We were beginning to come to the conclusion that there was something we needed to look at in the story… especially when we realised that our next two workshops would also take us to sites associated with the Arthurian tales. In September, we would be visiting a castle which, according to Malory in his Morte D’Arthur, was Lancelot’s Castle of Joyous Guarde, and in December we would see a Round Table… But that was still in the future. For the moment, as we parked the car and headed into the field, we were more interested in his Quoit. 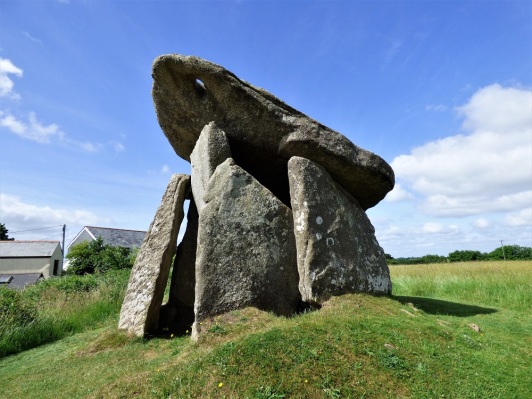 Around five and a half thousand years ago, a community came together to raise a house of the ancestors. The stones stand nine feet tall and are capped with a single slab weighing some twenty tonnes… an incredible feat of engineering by our standards, yet the megalithic builders, who knew the secrets of working with stone, built this and even greater monuments across the whole land.

The Quoit would once have been hidden beneath a mound of earth and stone, of which traces are still visible, forming a ring about twenty feet in diameter. The stones at the entrance to the structure would have been left uncovered, forming a portal to the realm of the ancestors. The Quoit itself is walled with massive uprights, one of which has now fallen into the central chamber that would once have held the bones and cremation urns of our ancestors and theirs. who would act as intermediaries between this world and the Otherworld. 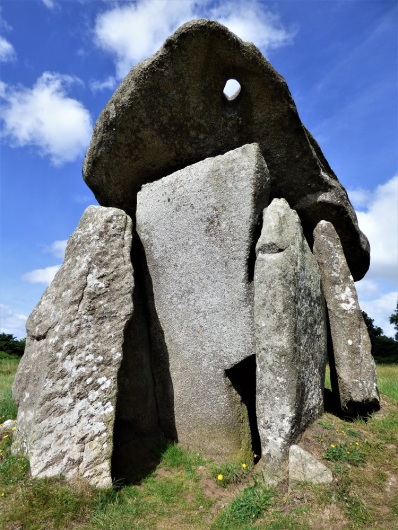 There are many similar dolmens, though this is one of the best in the area and has some rather curious features. Most obvious is the hole deliberately bored through the edge of the capstone. This would have been exposed and was probably used for marking an astronomical event, though without the rest of the monument… which may simply have been another stone or wooden posts, it is impossible to say for certain what it might have been. 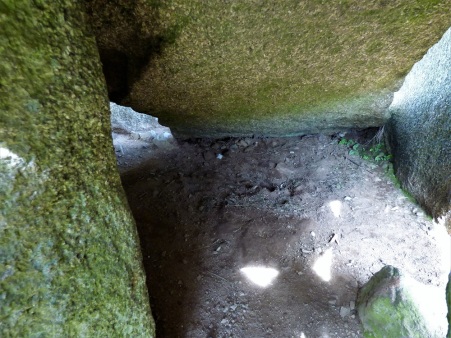 Light was used to some effect in many of these ancient places, right across the world from Egyptian Temples to Newgrange in Ireland, marking the passage of the sun like a sundial, or illuminating significant features at astronomical high points of the year. Even now, in the ruined tomb, there is something in the fall of light between the stones that hints at secrets long-forgotten.

There are a series of cup marks carved on one of the stones…eroded now and faint. The uprights seem to be shaped like figures and forms, with faces revealing themselves as you spend time with the stones. One vast figure looks very like one of the moai of Easter Island. 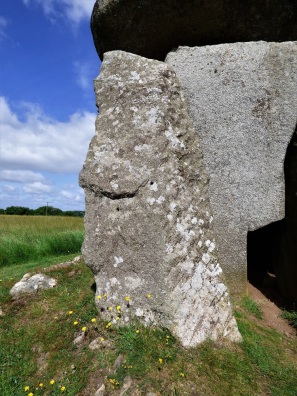 Amongst these shapeshifting stones that would once have been seen only by the dead within the earthen mound, one stone stands out for its angular and smooth appearance, and that is the blocking stone at the entrance. It is a shape we have seen at many other sites…for there are a number of distinctively shaped stones seem to occur over and over again, right across the country and we wonder if there was a particular significance to their form.

Although the portal would have been kept free of earth, the entrance would have been blocked by this huge monolith, too large and too well placed to be easily moved. Perhaps it was not necessary to enter the resting place of the ancestral bones once enough had been laid there? Like charging a battery… 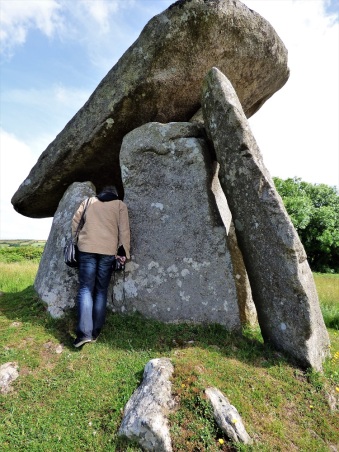 The blocking stone has a unique feature we have never seen before: a rectangular ‘door’ cut away at the bottom, into which another stone fits to seal it. Was it through here that entrance could be gained to lay bones in the tomb? Was this an exit for the spirits of the dead? Or an entrance for those who would keep vigil with the bones of history and knowledge? 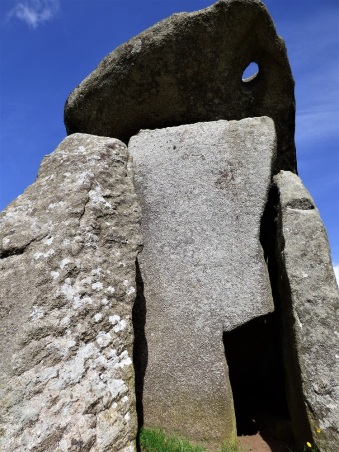 Sadly, although its mysteries remain unsolved and its presence remains imposing, Trethevy Quoit is now on the Heritage at Risk register, as erosion, grazing livestock and housing just a few feet away undermine its stability. These houses of the dead are beautiful, magnificent and full of secrets we have yet to unlock. They were places where communities came together, not just for funerary rites, but for the celebrations of the year, where the ancestors were invited to be a part of both the present and the future, not just the past. I would like to think we could at least preserve their stones for our children and our children’s children. 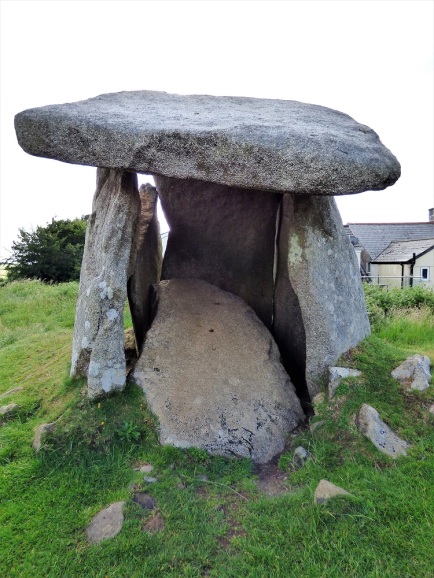 Like an abandoned church, all you may see at first are the tumbled gravestones and the empty altar. Yet although the dead may be laid to rest within its walls, a church is a place for the living. So too are these ancient stones. A ruined church is a sad affair, its empty altar is lightless, its roof no longer echoes back the prayers of the faithful. Yet, spend time within its walls and the shadows begin to whisper, telling the story of its history and touching the heart of its purpose. These ancient stones still whisper too… 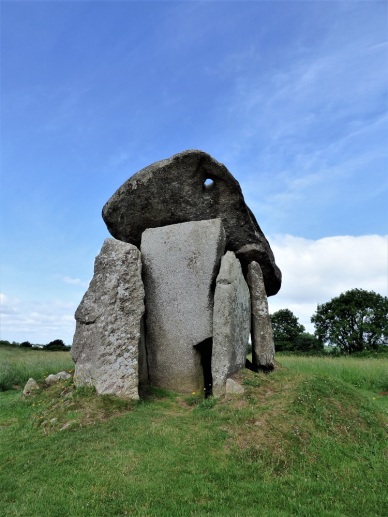 14 thoughts on “A Thousand Miles of History XXXVI: House of the Ancestors”