Instead of driving to the Red Lion as is our ‘tradition’ when coming back from these research trips via Avebury, we decided, for a change, to stop at the pub on the outskirts of the great monument. There was no reason for this particularly, we just thought that we should. And anyway, there is a rather cheerful stone outside the pub that welcomes you and invites you in. It may or may not be ‘original’, but it is not out of place in this landscape. As it was a hot and sunny day, we took our drinks out into the garden of this thatched, seventeenth century inn. 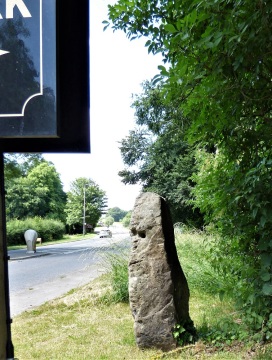 Watching a dog-walker disappear into the bushes, we realised there was a hitherto unsuspected footpath, so, when we had finished our drinks, we decided to have a wander and stretch our legs. We were immediately swallowed by a wormhole that led to wonders…

I have written so often about Silbury Hill, the largest prehistoric man-made mound in Europe, that it must be familiar to many regular readers as it is to us…. We always stop there to pay our respects when we pass. But we had never seen it quite like this before, floating above a sea of pure white flowers. The mound, said by some to be a representation of the gravid belly of the Mother, looked like it was dressed for a bridal.

One of the curious things about this deliberately flat-topped hill is how it can hide in the landscape. The summit is exactly the right height to remain unseen against the horizon from almost every angle except the ceremonial places and processional ways… and for a people with such skill, this can hardly be accidental. From our wormhole, we had the perfect angle to see the hill line up with the horizon and I rather think I would like to spend a week or two at the numerous significant sites at Avebury checking exactly where else you could see it do this… 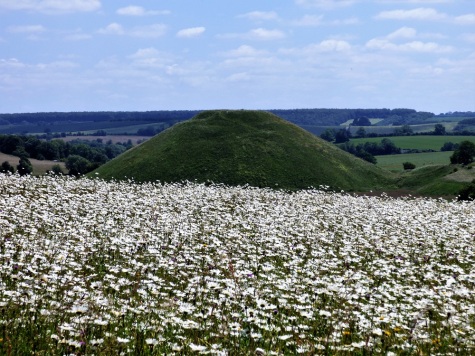 Elated by the gift of such beauty, we continued walking the wormhole, emerging onto the lane that runs into Avebury and right through the great stone circle. As we had never found ourselves on foot at this point of the vast site, we decided to carry on and see if we could get a shot of the two small stones we generally only see from the road.

The stones are known as the Longstones and individually as Adam and Eve. Adam, the larger of the two, once formed part of a Cove…a five stone enclosure, while Eve was part of the Beckhampton Avenue… an avenue of twinned stones that formed a processional way between the cove and the main circle. At the far end stands the Sanctuary, with West Kennet Long Barrow close by, at this end, there was a cove and another long barrow.

This cove was formed of five tightly spaced stones, open towards South Street Barrow. A cremation burial was found at the cove, but excavations showed no signs of any burials beneath the barrow, which, unlike other similar structures, had been built around wicker partitions using alternate layers of white chalk and darker earth.

Stewkley’s famous drawing shows the circles of Avebury before landowners robbed the stones for building materials, broke or buried them, and show how it formed the body, elongated neck and tail of a dragon. Not inappropriate for our trip, as Avebury, and specifically the cove, are a place where the Michael and Mary lines come together in a node.

We decided to see if we could find a path to these stones… we had never visited them as we had always been in the car at this point when visiting Avebury. We were not hopeful, but we knew there was a track of some sort and perhaps we could get closer. We did not expect to get this close… or to find what we found!

A field of wildflowers, alive with butterflies, moths and small creatures surround the two stones. “It’s a horse!” The stones were not small at all, they were huge, and Adam looked very like the carvings of the bridled horse that we see on the more ancient churches across the land.

“No, it’s a cow.” Sure enough, from another angle, the stone morphed into this sacred beast… for surely both horse and cow would have been of great importance to our ancestors. Curious that Stuart should have seen the feminine symbolism and I the masculine at this crossing point of the Michael and Mary lines.

“It’s a spirit stone!” There was no other word for it… the perception of the stone constantly morphed, taking first one form, then another, as the eye alighted on shapes, figures and faces. We have seen this so often now at ancient sites that we are sure the choice of stone was deliberate for a people to whom animism was a way of life.

Eve was the same, though her spirit showed great faces watching over the landscape, as well as amorphous figures that seemed to portray every emotion. By this time, we were just lost in wonder and spent a while laying by Adam surrounded by wildflowers.

Even knowing that we had a long way still to go and another ‘courtesy call’ to make, we were reluctant to leave, but, if we had found our way to the stones, maybe the barrow too would be accessible?

And so it proved. Driving into and beyond Avebury, we had been seeing the long barrow for years, every time we had gone round the roundabout. From the road it looks as if it is on private land and cannot be accessed. But, from the Longstones, it can… and we were jubilant. There may not be much to see… no entrance, no chamber… in fact, to most it would be no more than it is… just a mound of earth and chalk, crowned with flowers. To us it was another gift… and just for those we had received at Avebury alone, we felt we must have been doing something right over the past few days…

2 thoughts on “A Thousand Miles of History XXXXVI: Somewhere Old, Something New…”