We had pumped up the still-deflating tyre once again before leaving Kinross. In spite of all assurances by the mechanic, there was obviously some kind of problem and the winding roads of the Highlands are unforgiving. It was to be the second day of our journey and my third behind the wheel… and I couldn’t wait to get started. I love the Highland roads.

There are only a couple of roads that snake their way through the Cairngorms and most of our journey would follow a route we had taken for a previous workshop. Although the contours of the hills were familiar, the land was as breathtakingly beautiful as if it were new-made for our eyes. We did not stop to take many photographs… we know from experience that the camera cannot capture the grandeur and presence of the landscape here, offering but a pale ghost of the reality. And some things just need to be seen and felt.

Left to my own devices, I would have dawdled on that road all day, driving from layby to layby, just watching the ever-changing land as it played with the clouds. As it was, we were on our way to Grantown-on-Spey for a workshop weekend and we had a deadline to meet. Even so, between the majesty of the hills and the soaring wings of a lone eagle, there was a lot of squeaking coming from the driver’s seat… 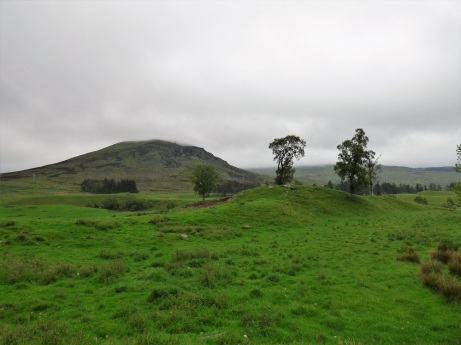 As things turned out, and largely because I had reined in my desire to meander, we arrived in the area earlier than expected. There was just time to pay a short visit to Elgin, about forty miles east of Inverness and around the same distance from our destination. We had passed that way once before and been unable to stop, so this was our chance to pay a flying visit to the cathedral…but not before being waylaid by the Biblical Garden.

The garden opened in 2006 and grew from an idea put forward by Donald McBean, a Senior Horticultural Officer with the local council.

Nestling close to the medieval cathedral, it contains well over a hundred of the plants mentioned within the books of the Bible, along with statuary and artwork to illustrate biblical verses.

From the shackled Samson bringing down the pillars of the Temple, to the Shepherd seeking a lost sheep, many familiar stories are illustrated in art, trees and flowers. 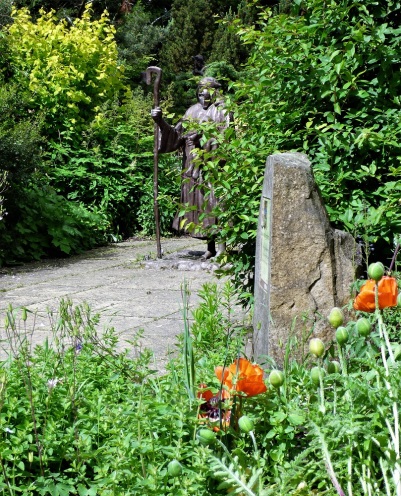 There was even Noah’s rainbow… the first of so many we would see over the following days and a very familiar sight since we had worked with the rainbow colours and the story of the Flood at the April workshop, Lord of the Deep. 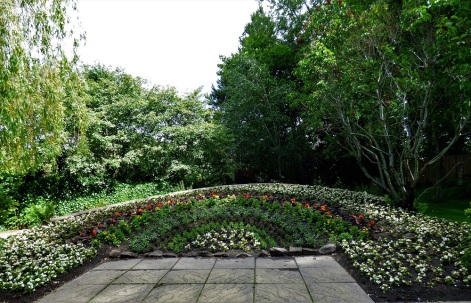 Getting so easily sidetracked left us even less time to see the ruined cathedral, but it was enough to be able to pay our respects to the remains of a building first established in 1224 to replace the smaller, earlier cathedral at Spynie. 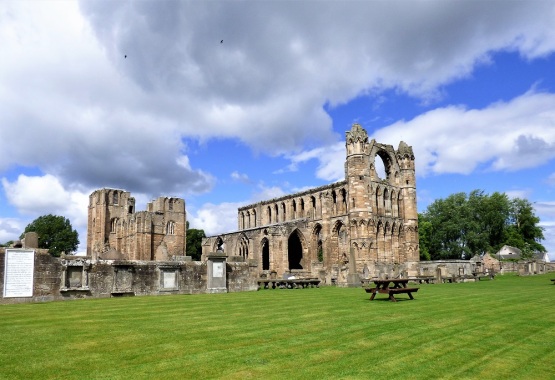 The land for the new cathedral was a gift from King Alexander II and, by 1242 it was important enough to support twenty-three canons who cared for its congregation. 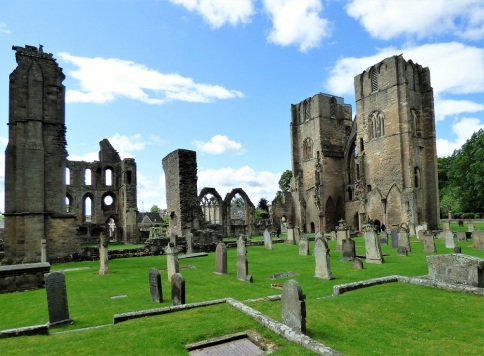 The building was devastated by fire less than thirty years later and the opportunity was taken during the rebuilding to enlarge it still further, including the addition of the octagonal Chapter House, which still stands, almost whole, amid the ruins.

The cathedral suffered major damage from the flames throughout its history. In in 1390 the Wolf of Badenoch, Alexander Stewart, Earl of Buchan and brother to the king, fired the building. Just twelve years later, the Lord of the Isles again set the cathedral burning.

In spite of its violent story, the cathedral remained in use until the Scottish Reformation. In 1560 services were transferred to St Giles’ church and the ornate and beautiful building was left to decay.

Many details remain, from the remnants of delicate tracery and graceful arches to the detailed carving held frozen in time. It takes little to rebuild the towers in imagination, reinstating its erstwhile glory. 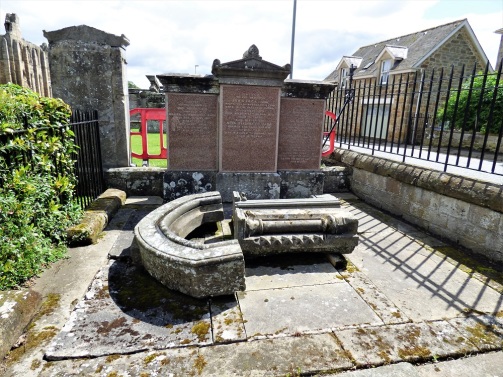 Within the nave, the effigies of bishops and knights still sleep and ancient symbols are carved in stone, but we did not pass the gates on this visit.

The once great cathedral is no more than a shell, holding the echoes of memories. In spite of its beauty, there is a sadness in its decay. The prejudice of factions warring within a single core belief wrote its history and, as with all things discarded by humankind, Nature began to take back her own. 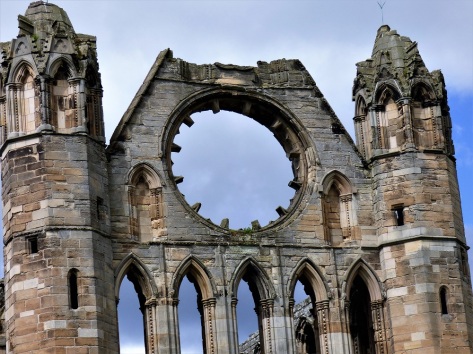 Seven years after the cathedral was abandoned in favour of the parish church, the lead was removed from the roof, assuring the building’s demise. In 1637, a storm severely damaged the remnants of the roof and in 1711, the steeple collapsed. It was not until the nineteenth century that work was begun to conserve what remained for future generations.

The cathedral was once surrounded by the homes of the clergy and officials of the church. Few of these now remain, though one gate in the curtain wall of the precinct and the precentor’s manse survive.

We sat for a while in the sun before the ghost of the great rose window. For us, it was a brief pause on a long journey… time to catch our breath and stretch our legs before the start of the workshop weekend. Such a long history deserves more than that, perhaps, but it was all we had to give.

Our next stop would be Grantown-on-Spey, a reunion with old friends and the opening of a magical doorway to the inner realms of heart and mind. We had no idea what the weekend would bring… and even less idea about what would happen after that. Sometimes, you just have to wait and see… 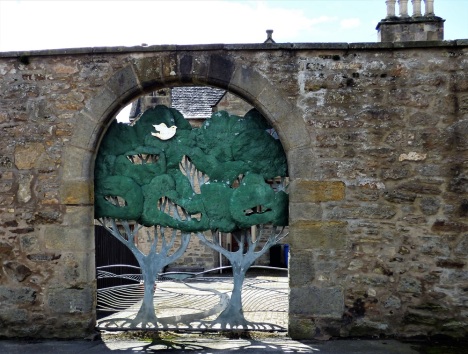 8 thoughts on “Dreaming Stones ~ Into the Highlands”