It was later than anticipated when we left the rest of our Companions on the Sunday afternoon at the end of the workshop. We hadn’t eaten, needed a garage for the damnable deflating tyre and we were a long, long way from home. Even with motorways and optimal speeds every foot of the way, home would still be a solid ten hour drive south. But then, who was heading south?

It may look as if we are always gallivanting, but Stuart and I both work, taking holidays for workshops and meetings. As I work seven days a week, even weekends have to come out of the holiday entitlement and, as we live a couple of hundred miles apart, no matter where we go, there is driving time to be added which eats it away even more. While we are wandering the country, we try to spend time meeting friends or with visiting Companions of the school too, often tacking a day onto the end of a workshop so that those who have travelled long distances, and who we too seldom see, can see a little more of the area with us. With luck, we manage to squeeze a day either side of a workshop so we can meander a bit on the journey for our holiday. This time, however, we had the luxury of three whole days before I had to be back in the south and, although much of that would have to be on the road, we had, eventually, come to the realisation that we needed a plan.

Right up until a couple of days before I left on the first leg of the journey, we had no idea what we would do with the time. We had tried to get hold of old friends we wanted to visit on the east coast of Scotland… but in spite of sort of doing so, had not been able to arrange anything. We hoped to hook up with three friends from the blogosphere too, as we travelled down the western side of the country but we couldn’t make any arrangements till we knew what we were doing. And we hadn’t a clue. There is just too much we want to be able to explore in the far north… and nowhere near enough time.

We needed a plan. Stuart felt we needed to get onto one of the Scottish islands if we could. They have been calling for a while now. I also came across a site I thought we should visit on the way home… Cairn Holy… and that was about it. But it was about here that the first hints of oddness started to creep in. We had not been able to sort out a rendezvous with our friends on the east coast, even though we had been in contact… and that was weird. We had arranged to meet Adele Marie Park during the weekend… though she had sadly been unable to make it in the end. Mary Smith had, bizarrely, suggested we meet up at Cairn Holy and that we might be joined by Barb Taub… who lives on Arran, a Scottish island we really want to visit. That, at least, we should be able to manage.

Meanwhile, I had been looking at just which islands we might, with practicality in mind, be able to get to, vaguely remembering that Skye now has a bridge between it and the mainland. That would work. We had both long wanted to visit the island. I looked up what archaeological sites there might be on the island but my normally trusty sources came back with only three, and none of them seemed particularly interesting. Even so, we thought, we could see a little of Skye and get down to meet Mary and Barb at Cairn Holy.

I was going to be happy enough just driving through the Highlands, but I extended my search for ancient sites close to Skye, hoping to get some ideas for the journey in between. One name jumped off the map… Callanish. But… it was on another island, beyond Skye, in the Outer Hebrides. We would need a car ferry as it is a long way from the little port. It really didn’t look feasible, not with the small amount of time we had… but it hung in the air like Christmas, tantalising and magical… a place we have both dreamed of visiting for decades and never thought we would see.

Well, at least we would get to see the beauty of Skye. We could call it a recce… for a nebulous ‘one day’. So, after the workshop, on Sunday afternoon, instead of sensibly heading south to begin the long journey home, we turned the car towards Inverness and headed north instead. 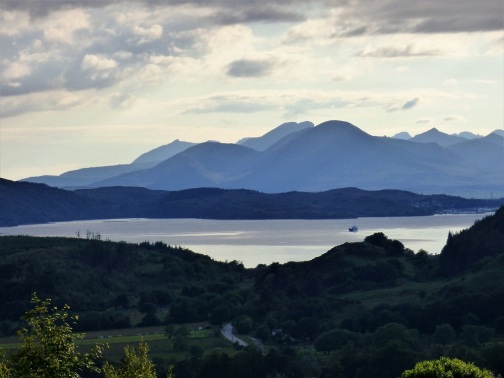 Now, I live in the rural ‘soft south’, forty miles from London. Stuart lives in a city… we are never far from anything we need and pretty much everything is open all the time. Scotland, on the other hand, closes on Sunday and is comprised, at least where we were, of miles and miles of wonderfully empty roads snaking through incredible beauty. Not only did we need a garage for the deflating tyre, we needed food… and, we thought, a garage might have sandwiches at least. We saw not a one… passing through Inverness and over the Firth, we knew that the roads would become even more isolated. We turned off the A9 at Dingwall, hoping…

Dingwall too was closed… it was getting on, to be fair. But we found a Wimpy. I thought they had all gone decades ago… I haven’t seen one for years… but, unless we had fallen through a temporal wormhole, there is a Wimpy in Dingwall. And it was open. We retired to the car to break our fast, eagerly watched by a seagull who had spotted bounty through the glass roof of the car and who insisted, very vocally, on being invited to dine.

Had there been time, Dingwall would have been a good place to explore, with a vitrified fort on a nearby hill and a good bit of archaeology to delve into, but time was the one thing we did not have. Trusting to luck with the tyre, we set off once again to cross the hills and the country, heading towards Skye, watched by a great bird of prey that was circling the tower of the MacDonald Monument on the hill… 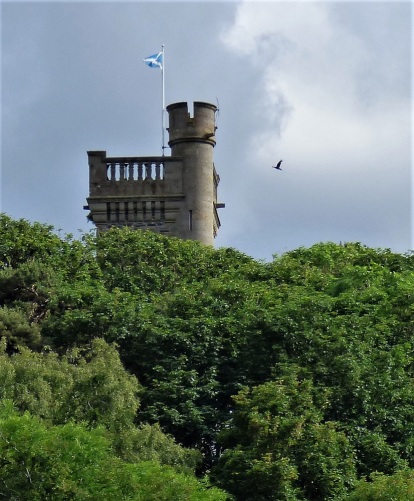