Yes, We had been wandering the moors… when have we ever been at Ilkley without me chomping at the bit to get up there? And I think we’d just come in from a wander in the moonlight too… though we would have stuck to the edges, unlike the first time I went back there after years of absence and was called up there in the dark… 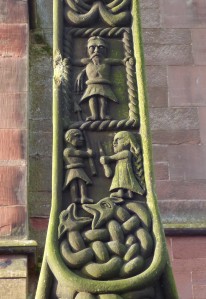 The knots with which Loki is tied struck me… my first thought was the Knot of Isis, though that can have nothing to do with the image apart from its symbolic nature.

The ill-defined features on most of these early depictions make me wonder if they are only there to define the function of the senses, rather than to give an indication of personality, which is a human trait rather than a godly one, after all. We tell the tales of the gods, their stories couched in human form to aid our understanding, after all, not because we believe the Powers That Be really do behave like lecherous old men or spoiled brats.

And look how much grief has been caused by planting the seeds of misunderstanding by portraying divinities ‘out of character’. The image of the fair-skinned, long-haired, blue-eyed Jesus, wearing flowing robes contradicts the archaeological evidence for a man of his era and origins, for example. And how many times have we seen representations of Him as a mediaeval noble? 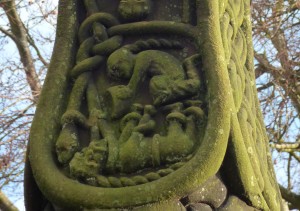 On the other hand, the almost universal image that has been created by artists and devotion over the centuries will have built an effective thought form, ensouled by faith and prayer…

As to the Kirkby Stephen Loki, I wonder if his headgear would have been a triangle like those we saw on the Middleton crosses?

Speaking of crosses, the one at Aspatria was a real gift, preserving, as it does, a copy of the weathering Gosforth Cross. I just had a look at the photos we took and realised that here too both Odin and Loki feature as part of the main decoration. Not that I mentioned Loki being fed on the dripping venom of the serpent… it was supposed to be ever-burning… rather like the perpetual torment of the eagle eating Prometheus’ liver.

No, I haven’t had chance to watch the film yet… I’m struggling to get set up for the adventure at the moment.

Yes, I do have the manuscript… and had made the connection. The Norse stuff is definitely making itself felt so we may well have to wander north via Gosforth and Aspatria again. 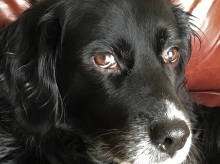 Who knows what literary gems might be born from such a trip? 😉

The Daft Dog is refusing to rise this morning. Apart from a quick growl at the horses in the field.