The chapel of Our Lady and St Non perches no more than a few yards above the steep cliffs and clear waters of the bay. Rising beyond a bank dotted with the brilliant spires of foxgloves, it was a welcome sight on a damp morning. It is a place I have wanted to visit for a long time, though the building itself is less than a hundred years old. The tiny chapel, just twenty-five feet long and twelve feet wide, was built in 1934 by Cecil Morgan-Griffiths. He had built a house on the clifftop, close to a far more ancient site that has long been revered as a holy place and, as the nearest Catholic Church was many miles away, he built the little chapel that would become the most westerly in Wales.

Morgan-Griffiths used stones and fragments of architectural beauty from ruined chapels in order to build his own. The holy water stoup by the open doorway as brought here from the Chapel of the Fathoms. It is all that now remains of a place wonderfully named. The pale slab of stone that forms the altar came from the chapel dedicated to St Patrick that once stood at Whitesands, where we had officially begun our weekend. 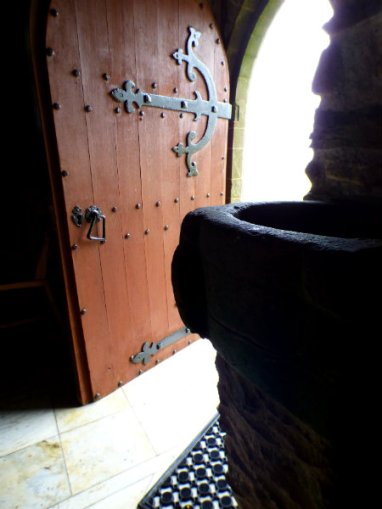 It seems as if the little chapel is home to the ghosts of many ancient places, giving their bones sanctuary within its walls. Perhaps it is this that makes the place seem warm with prayer and peace. The chapel is a living place of worship and pilgrimage… the Sisters of Mercy care for the chapel and Morgan-Griffiths’ old home, keeping it as a place of spiritual retreat. It has a gentle air; a sense of inclusion that welcomes all who seek shelter or solace within its walls… even the birds.

We were greeted by the swallows… a nest perched high in the rafters, seemingly overfull with nestlings with their frantic parents swooping in and out in the incessant search for food. That explained why the door stood open in such inclement weather. Even so, I had the feeling it was never completely closed… neither to the birds nor to those travellers who find their footsteps leading to the chapel on the cliff.

We wandered around the chapel, reading the signs and prayers in neat little frames on the walls and looking at the stained glass that commemorates the local saints. The chapel is dominated by a beautiful but incongruously large statue, a copy of Notre Dame de Victoire from Paris. Her marble sophistication seems out of place in this tiny space made of reclaimed stones and shattered fragments of the past and sits in stark contrast to the simplicity of the Stations of the Cross that line the walls… no ornate scenes here, just small slivers of wood with a circled cross, identical on each of the Stations. We would learn why a little later, but they seemed to confirm that within this Roman Catholic chapel lay a Celtic heart. 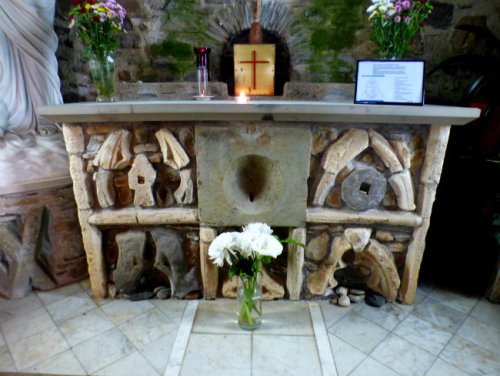 One by one, without a word, we each sat in silent contemplation. The space invites that inner silence that is, in itself, a prayer. One by one, we each rose when we were ready, taking a last look at the stained glass in their recessed windows. One portrayed St Winifride… whom we knew as Gwenffrewi. The saint and her story has been woven through our travels for a while. 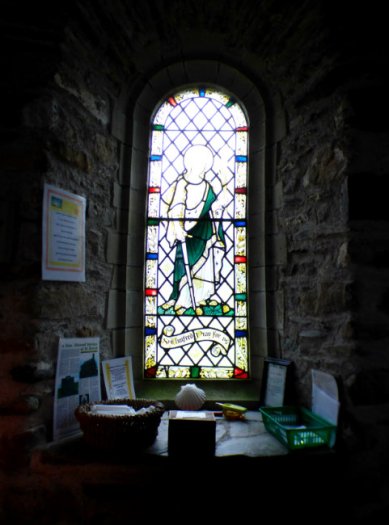 Above the altar, St Non herself is portrayed in a window by William Morris. Hers is a curious story, combining many elements found both in the saintly hagiographies and the legends of older times. The celibate daughter of a local lord, she was ravaged and found that she was with child. The pious lady lived on nothing but bread and water throughout her pregnancy. When it was realised that the priest could no longer preach in the presence of her unborn child, it became obvious that the child would be a power in the land. The local lord, fearing the future, sought to murder the babe as soon as it was born, but Non escaped and a violent storm protected her. In spite of the wild weather, she gave birth to her son bathed in light, though she left marks in the rocks that she grasped when the birth-pains took her. She named her son Dewi… we know him as St David, the patron saint of Wales.

Before we left her chapel, one of our Companions, who loves the place dearly, led us in a simple and beautiful prayer, capturing with his words the spirit of a universal faith that belongs to no religion and to all. In these sacred spaces, be they church, chapel or ancient stones, there is a common core of faith that transcends dogma and belief, seeing to the heart of what lies behind our quest for understanding. In such moments the veneer of labeled religion is stripped away and hearts can come together in harmony, each with their own faith, their own story and holy name… and know that they, like the Light towards which all turn in many guises, are One.

5 thoughts on “Going West: The Chapel in the Mists”