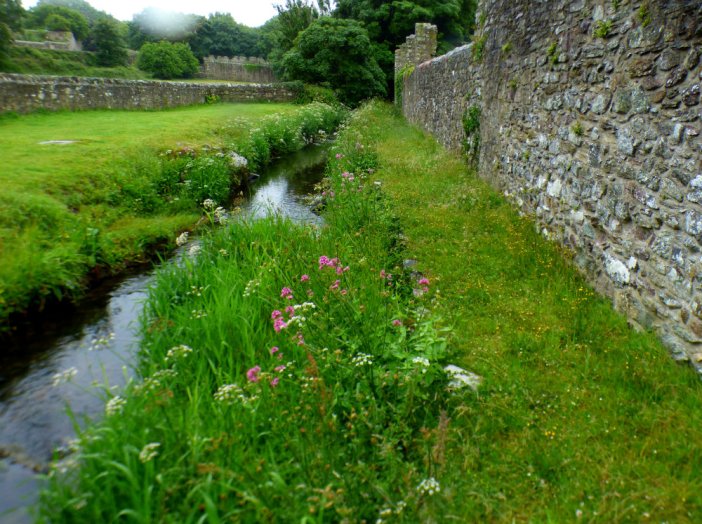 Frankly, I thought it appallingly bad planning. Could the town not have chosen a different day to ceremonially install their new mayor? It isn’t as if we hadn’t advertised our itinerary for the weekend, culminating with a visit to the Cathedral at St Davids and lunch in the refectory. In that order. But no… the Cathedral was otherwise occupied and would be for some time to come. It was still occupied by the time we had finished warming up with pots of tea… and still too busy after I had wandered round the outside of the church with the camera, trying to get a few good shots in spite of the rain that was now beating a steady tattoo on the lens. We were at a loose end. 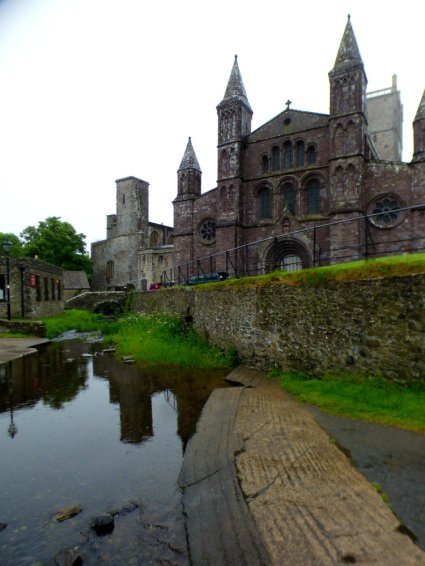 “Another twenty minutes or so,” said the gentleman manning the door. Some chose to stay in the warmth of the refectory. Others disappeared, planning to gather again shortly. I wandered off over the little stream to be a tourist. Tourism is not the point of these weekends and although we have a plan of where we will go and what we want to see, we have learned to be flexible in our approach, shunning rigorous timetables in favour of time to savour the sites we visit. Sometimes, though, there is nothing wrong with a little tourism. The Cathedral is not the only thing worth visiting in St Davids and, with little time at our disposal, the Bishop’s Palace is a good place to while away a few moments. To be fair, it deserves a lot more than I had to give it, being part of one of the oldest and certainly most important Christian sites in Wales. 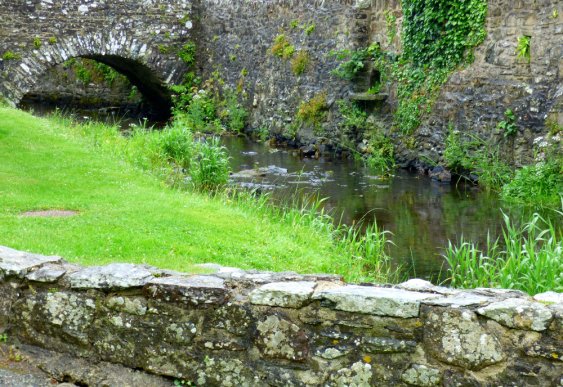 We’d had our first sight of the ruined palace as we approached the cathedral from St Non’s, watching the remarkable architectural details reveal themselves through the mist and rain. Fifteen hundred years ago, a monastery grew up here. It was not then the peaceful spot we know today and the monks who lived there saw their home sacked by Norse raiders, then quietly rebuilt it, at least ten times over the course of the next four hundred years. It was only after the Norman invasion of 1066 that the monks began to know peace. The strong presence of the Norman barons imposed fortifications on the growing town, protecting the monastery and the relics it housed. 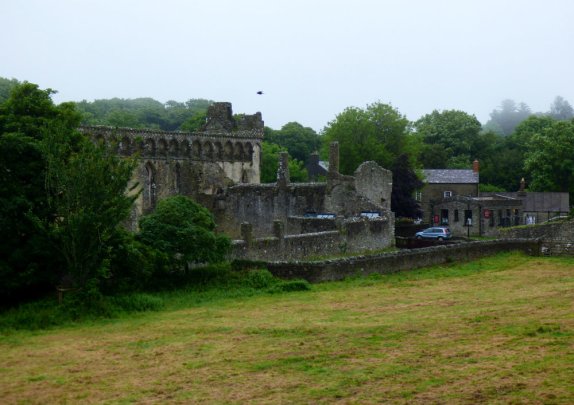 St Davids was already recognised as an important spiritual centre. William the Conqueror himself came to pay his respects to the relics of St David in 1081. Later, in 1284, King Edward I would also make the pilgrimage. The remains of the current palace reflect that later date; the building was begun around that time, and work continued until the middle of the following century. The Reformation saw the demise of the palace; its fall into ruin much hastened by Bishop William Barlow, who sold the lead from the roof in 1536 to pay the dowries of his five daughters… the equivalent of twelve years income from the episcopal see! 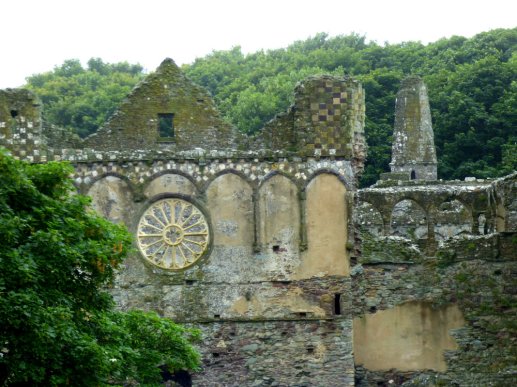 It is always curious to begin to reconstruct in imagination a site that is now but a shadow of its former self. It matters little whether it is a stone circle, a tomb or a palace… it is the small, almost insignificant things that give the real clues, not to how a place looked… but to how it was. Here, the warm tones of the volcanic rock and local stone have been embellished by a chequerboard pattern. Great windows that perhaps once have held stained glass pierce the walls and arcades decorate every face of the palace, inside and out. Wide spaces, high ceilings, towers and turrets… this is a visible show of wealth and power, more temporal than divine. The little monastery that faithfully guarded its treasured relics against the invaders was obliterated by its own 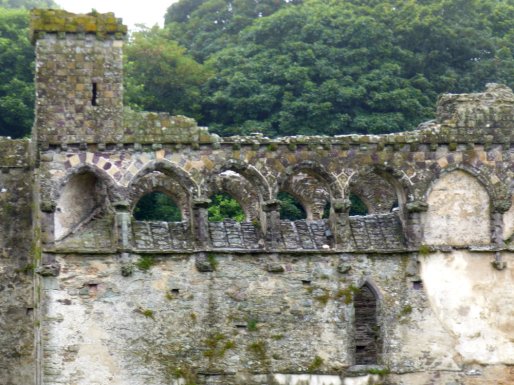 The ruined palace is now crumbling, its wealth generated by tourists, its fabric held tenuously together by those who seek to maintain the presence of a building that has itself become a relic. Its empty shell holds more than memory, it holds a lesson pertinent to why we had gathered for the weekend. We too start small, growing with the simplicity of a child that sees the world unclouded by the complexities of adulthood. As we grow, the malleable clay of our personality is shaped by choice, reaction and experience and the ego builds walls behind which it can hide from invaders. But the protective walls are stark and feel like a prison, so we add embellishments in an attempt to display an illusion of personal power… and, if left untended, those too will eventually crumble and decay becoming both a danger and a liability that can cost us dearly. Like the palace, what began in simplicity, grows beyond our ability to sustain it and beyond its true purpose. 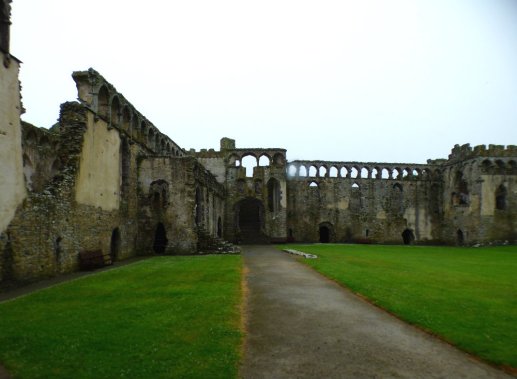 The first monastery here was a simple place, designed as a vessel to hold something sacred. Overlaid with the trappings of power and ambition, that purpose was lost. The clay of our being is ours to shape. It too holds something sacred… whether you believe in the soul or simply believe in the indefinable spark of animating life. We owe it to ourselves to make sure the vessel that we build is fit for its purpose. It is not in the walls that we build, but in the space within, where we live and have our being. It is not the vessel, but the space within that holds the wine. 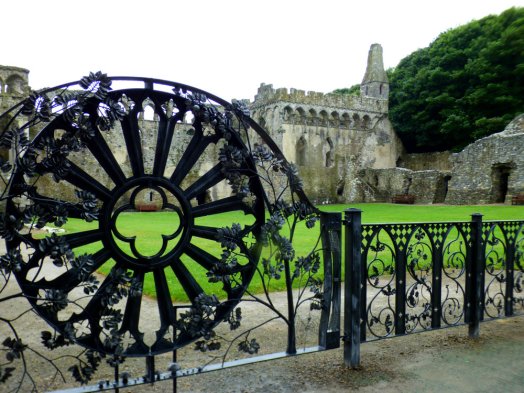