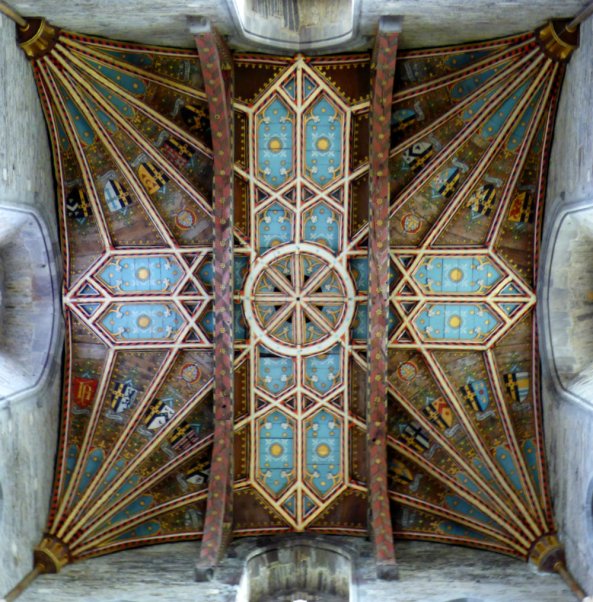 It is difficult for our modern eyes to imagine the colour that would once have been present within our oldest churches. The carved and decorated facades, often covered with statuary, would have been brightly painted. Walls that we are used to seeing in mellow stone and whitewash, touched by the ochre ghosts of medieval paintings, would once have gleamed in the flickering candlelight as the frescos borrowed life from the flames and processed through the shadowed aisles. 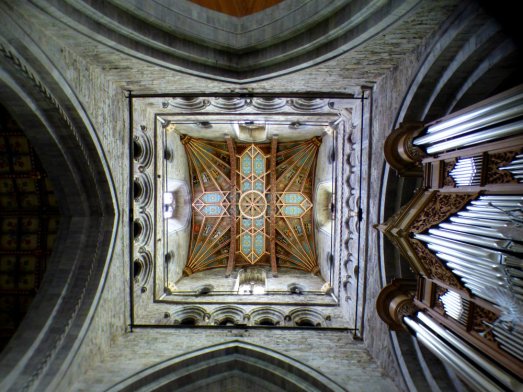 It is in the great cathedrals that we can still get a glimpse of the light and colour that provided such a contrast to the homespun world when dyes were expensive luxuries reserved only for the wealthy. At St Davids, a high, painted lantern still crowns the arches of the Crossing, drawing the eye ever upwards to the heavens.

Delicate traceries of contrasting stone mark the vaulted ceilings of the chapels, punctuated by highly coloured shields and bosses displaying designs both armorial and symbolic. In the thirteenth century Lady Chapel at the Easternmost end of the cathedral, I saw a symbol I recognised, the three hares who share their ears. Each hare has two ears…yet only three ears are depicted.

In Christian terms, it symbolises the Trinity, though it has older and other meanings that include and transcend the artificial barriers that we erect between our various cultures and religions. It is a symbol I frequently wear, reminding me of a much-loved friend whose physical presence is far across the ocean yet who is never far from my heart. Other bosses in the little chapel show the Dragon, the symbol of Wales as well as demonic creatures apparently devouring the unholy or perhaps just those who are tempted.

Today our churches are comparatively pallid affairs with colour used sparingly, mainly in stained glass and textiles. There is still a sense of awe, inspired by the scale and beauty with which you are greeted when you walk through their doors. In the older places though, with their vast proportions, lofty, lighted vaults and rich decoration, you can see how they must have appeared to those who visited them.

To the lords and princes, the vast, ornate space would have spoken of power, both temporal and divine. From the ordinary folk, the overwhelming presence of that power must have evoked automatic obedience. To the pious, the beauty and craftsmanship would have seemed a fitting externalisation of faith made manifest in an attempt to echo the glory their inner hearts could see, while to some it must have seemed as if they were afforded a glimpse of a fragment of Heaven itself.

There is much colour remaining at St Davids, from the painted ceilings to the stonework, from the fragmentary frescos to the gilded reredos behind the High Altar and the stained glass that punctuates the clear. 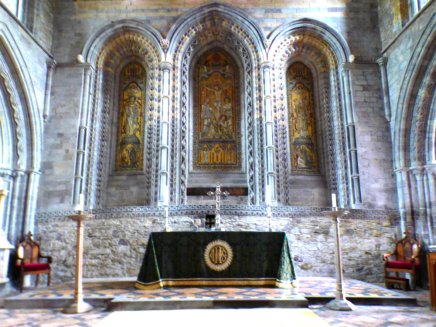 Yet for me, it is the smaller details that may well pass unnoticed that, in bypassing the sense of majesty, truly capture something of the long history of the people who have passed through the portals of this ancient church. It is the traces of polished colour on the memorial brasses, like those on the tomb of Edmund Tudor, that speak of the touch of reverent hands or overzealous cleaning… 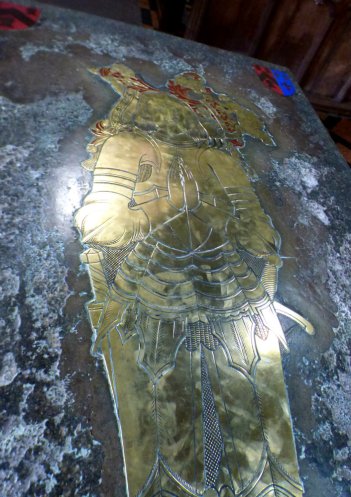 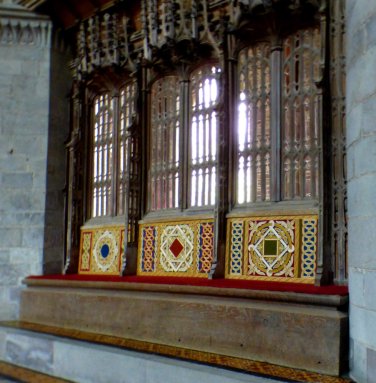 Undoubtedly for me, it was the painted birds I was shown that bring the majesty down to human proportions. Such a simple painting, two magpies and an owl, hidden behind the arch of the carved stone screen of the pulpitum. Few would know it was there… few may notice it today, yet the birds seemed to bring something of the natural world into the unnatural magnificence of the cathedral.

They reminded me instantly of another church… this one, just a tiny, single cell building that stands on a site held sacred since prehistory. It is the place where many of our adventures began and its peace and simplicity hold a very special corner of my heart. On the walls there too, an owl and a flock of birds were painted half a millennium ago in the simple ochres of the time. There, St Francis stretches out his hand to them, speaking to his fellow creatures with love… and, within the vast interior of the cathedral, it is the little painted birds that remind me that Love is the central tenet of the Christian religion, so often lost beneath the politics and power-play of man’s ambition.