The first hug was a good one and was soon followed by others as we gathered in the car park of Fox House. I had arrived at our rendezvous minus my erstwhile companion and his absence was noted. “He’s not feeling his usual self,” I explained. The disappointment was palpable.

“It must be bad for him not to be here…”

“Umm… well, he’s weirder than his normal weird…” It was just one of those things that couldn’t be helped, but it felt odd greeting the workshop’s gathered company without him.

A few minutes later we were walking along the pale pathway that led to the bridge across the stream where the two of us had inadvertently greeted the dawn that morning. On one side of the path the land rises steeply, blasted by quarrymen and unnaturally exposed; a reluctant nakedness that hurts the eyes. On the opposite side the land slopes down to the stream that divides the valley. Beyond the water, the gritstone bulk of Carl Wark rises from the bracken, still worked by Man, but with greater respect and harmony.

This was where we were heading, an ancient and enigmatic site of which little is known and much surmised. The plan was to begin the weekend with a sunset, but the weather seemed unlikely to oblige. It was not unpleasant in the valley, but on the heights the wind always blows and clouds were gathering.

We talked as we walked, as friends do who see each other too seldom, spreading out along the path as everyone fell into their natural gait. As we neared the final descent to the bridge, I gathered the companions together and, taking the lead, began to tell them a little about the site, the incident with the chocolate and our joint conclusion that the pack-horse bridge was really a troll bridge. I told them too about the origin of the site’s name… Carl Wark is thought to derive from the Old Norse for ‘Old Man’s Fort’. The ‘Old Man’ would have been seen as diabolic by the Christians, who determinedly shunned pagan practices… or adopted them under an altered and sanctified guise. Maybe the Old Man was not the Devil, but the ancient one who guards the ways…

…and as we rounded the final hillock that hides the bridge from the path, a wild-haired figure leapt from beneath the bridge to bar our way.

Behind me there was an intake of breath as realisation set in… he was definitely weirder than his normal weird; his staff planted firmly in the earth, draperies of wool the colour of autumn and a symbol bound about his brow.

There was no pause for discussion. I raised my staff and answered the challenge.

You could call it playacting… we call it ritual… but there is a serious and definite purpose to such moments. Up until we reached the bridge we were little more than tourists, friends sharing a common goal and interest. Our purpose at the bridge was to create a point of crossing, a demarcation between the everyday realm and a magical landscape that could be seen with the eyes of the heart. In terms of the system we use within the school, you could call it a psychological shock point, where, by taking accustomed normality by surprise, you open the doors to possibility.

In the same way that we do not take photographs during rituals, we do not share all their detail either. It would be of little use; experience adds a different dimension that is unique to each one who attends. It is enough to say that our purpose for the weekend was affirmed, each gave their assent to our stated intent and was given a personal symbol for use during the weekend.

The best-laid plans of mice and men… or in this case the Old Man and the Walker, are never going to work out perfectly though. Our plan to smudge with incense refused to ignite, so we used sound instead… which led to a realisation about the relationship between sound and stone that we had missed, in spite of it knocking on the doors of consciousness for long enough. Some apparent disasters bring their own gifts. 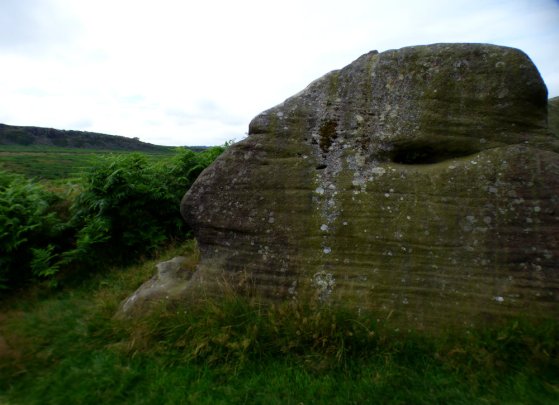 We had crossed flowing water into the ancient, sacred landscape and the mood was noticeably different as we began the ascent of the escarpment walking up to a huge boulder that seems to watch like some giant head rising from the bracken. The ‘Old Man of the Fort’ stayed behind to gather his things and bring up the rear and Steve wandered back to the stream to join him. Otherwise, we might never have known…

Clambering beneath the bridge (and forgetting the promised gift to the spirit of the waters) his fingers were refused purchase on the stone and, after several attempts to right himself, the Old Man measured his length in the cold, moorland stream. He paid the price of our passage and forded the stream in the old way.

Dripping, he rejoined the company to whom his final words had been those of protection. Oddly, there was no real hilarity… the atmosphere had changed and we were far from a place of ridicule, although there was both laughter and concern. I was reminded of the old magical affirmation, “I am thy sacrifice.”

The weekend had begun. 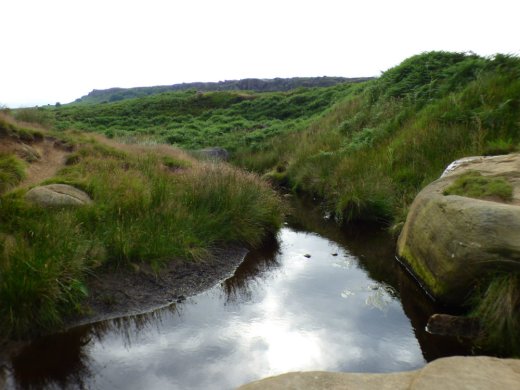 15 thoughts on “Circles Beyond Time ~ Crossing the Troll Bridge”