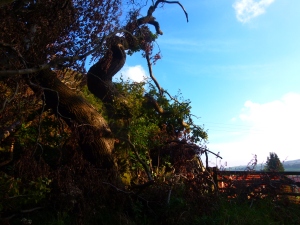 I leave Wen to her circumambulations and try to focus on what little good is to be seen about the place… which amounts to Rowan Trees…a whole raft of them.

They never fail to lift my spirits but here even they are struggling and only serve to remind me that there is a rather sombre tale about a castle of rowan trees and under normal circumstances I would simply make a mental note to look it up when I get back home.

All I really get is that the Castle of Rowans was an illusion… a trap to lure the unsuspecting, into a slaughter…

…And slaughter might very well explain it looking at Wen’s features… which I do not really want to right now because of the very obvious pain…‘They burned it themselves,’ she says kicking the vitrified rock and then continues her circuit. That is not good. Wen has already told me that she considers ‘them’ her people.

‘Why did they do that then?’ I try to sound inquisitive but I am not really and I do not really want to know. Not because I am not interested but because I know it is going to be just too awful.

‘To protect their lore…’

10 thoughts on “Field of Sheaves: Rowan…”