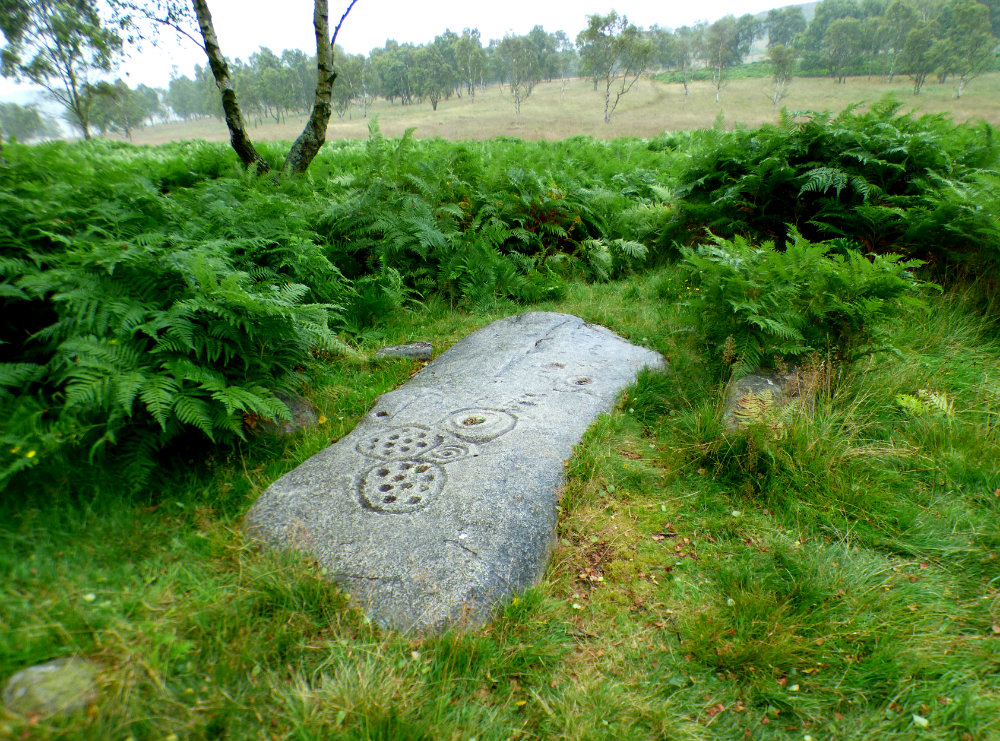 Wading through the wet bracken, we knew, would be worth it, for on the other side of the green fronds there is a stone…and it is something a bit different, in more ways than one. Several examples of Neolithic rock art, or petroglyphs, have been found on this part of the moor. One we have yet to locate, another, found during the excavation of a cairn, has been moved to the museum in Sheffield, and one… a huge, earthfast boulder… remains where it was found. But all is not what it seems.

The stone, one of the best we have yet to see in the area, was discovered in the 1960s, but it was soon noted that the carvings were rapidly deteriorating. This, sadly, is the case for many of the remaining petroglyphs that have withstood natural weathering for thousands of years, only to be almost obliterated since the Industrial Revolution altered the atmospheric chemistry of the world. One of the best known carvings to have suffered so is the Fylfot at Ilkley, also known as the Swastika Stone, that bears an image similar to the Camunian Rose found carved in Italy. When I was younger it was clearly visible. Now only a faint shadow remains and can only be clearly seen when the weather and light are right, behind its modern counterpart that at least still allows us to see what was once deeply carved in stone.

Something needed to be done in order to protect the stone we had come to see and prevent it from sharing the same fate as the Fylfot. It is a large stone, difficult, though not impossible, to remove to a covered location, but the trouble with moving such stones is that their context is forever lost. We do not know for certain what they mean. What we do know is that many, if not all, of the significant stones that our ancestors left only make sense when seen in relationship to their surroundings. There are known alignments to landscape features, planetary bodies and to other ancestral stones… removing them from their place in the landscape robs us of any chance at all of learning to understand them.

It is only by looking at the curves of a standing stone against its own horizon that you can see how they have been formed to shadow the hills. It is only by sighting through the notch on a standing stone that you can see how it aligns with a cliff or a stone far distant. It is when you stand within a ring of stones with the stars wheeling overhead that you begin to glimpse the understanding our ancestors had of the dance of the heavens. The mathematically inclined can plot the movement of the sun and show on paper why the Heel Stone and Trilithons of Stonehenge are so fantastically aligned… but when you watch the sun, framed within a stone arch and poised delicately atop the Heel Stone then, you can feel it.

It is unlikely that our ancestors spent time computing zenith and nadir in a way we would recognise as mathematics, but they undoubtedly had an understanding that allowed them to build magnificently complex structures, like the recumbent stone circles prevalent in Scotland and Ireland that chart so precisely the movement of the moon. Moving their stones means we lose their precision as well as their natural context and any chance of understanding how and why they were so placed. The team charged with preserving the carved stone at Gardom’s, seem to have understood this and came up with an innovative way to protect it. Leaving it in place, they took a cast of the stone and created a perfect replica with which to encase it. The stone remains where it has always been. Close by, two stakeholes, some flakes of flint and a polished, shale ring were found.

We do not know what the carvings meant to those who made them We do know that they are often found close to ritual sites. They may have been maps whose key we have now lost, or plans of the sites themselves. It has been suggested that they are star-maps or show the placement of springs, pathways or that, rather than showing any physical detail, they map the energies of the stones and circles themselves. We know of one that looks more like a three-dimensional architect’s model than anything else and others that resemble counting devices. As we gathered round the stone, our companions added their own suggestions, wondering at the complexity and meaning of the arcane design.

Before we left there was another small ritual, with each companion choosing a token from those that had been placed within the hollows of the stone. These they would keep until much later in the afternoon when we had something we wanted to try within the stone circle. It would soon be lunchtime so made our way back towards the glade of the standing stone and then back out amongst the great stones of the Edge…

8 thoughts on “Circles Beyond Time~Ancient Lines”