They were locking the door on half of the Abbey Church as we arrived. The new bit, built on the site of the old choir, was opened in 1821 and houses the tombs of Queen Margaret (later canonised as St Margaret), King David I and King Robert the Bruce who fought to re-establish Scotland as an independent nation and defeated the English army at the battle of Bannockburn. Around the top of the tower he is remembered in stone. 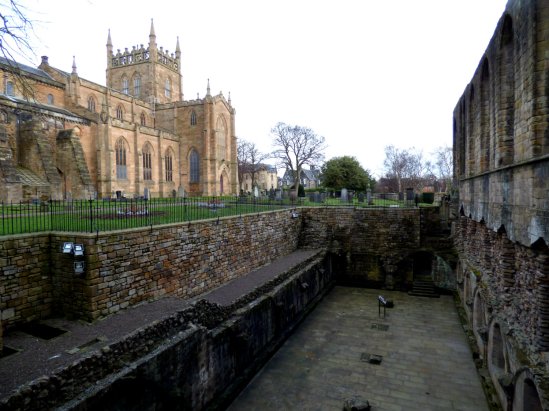 Robert the Bruce died in 1329 and, following his wishes, was interred in Dunfermline Abbey beside his queen, in front of the high altar. His heart was removed and placed in a silver casket by Sir James Douglas, who is said to have worn it round his neck and took it to the Crusades. In battle he threw the casket into the fray, crying, “Now pass thou onward before us, as thou wert wont, and I will follow thee or die.” Die he did, but the casket was recovered and the heart taken home to be buried at Melrose Abbey as the King had wished. 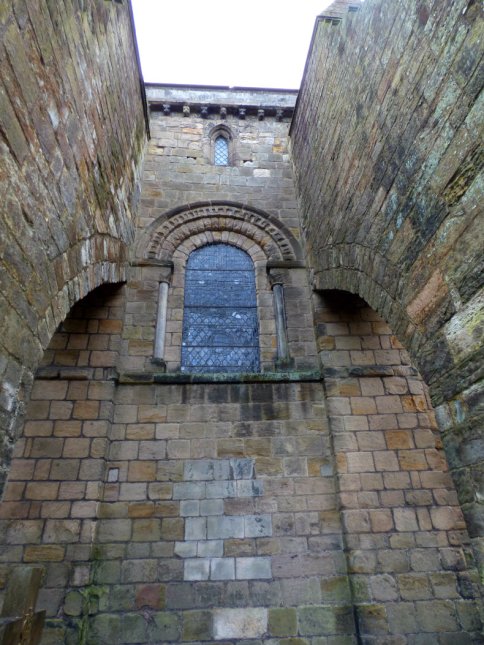 Both body and heart were lost over time, but both were found during building works. The body, still covered in cloth of gold, was eventually reinterred in the Abbey Church in 1819, and the heart in 1998, two years after its rediscovery at Melrose. Dunfermline holds a special place in the heart of Scotland 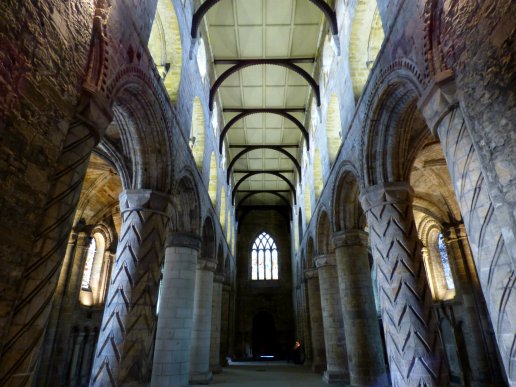 However, it wasn’t the new bit, but the old we had really come to see. The original priory had been founded in the eleventh century, during the reign of King Malcom III and his wife, who later became St Margaret, the Pearl of Scotland. Their son, King David, endowed the church as an Abbey and in 1128 he built the church. In the floor, the outlines of St Margaret’s original early priory and the Culdee church are marked.

The great carved pillars, unequal in diameter and each different, are said to be very similar to those at Durham cathedral… which we were to see for ourselves few days later. They are, we found, not dissimilar to those at Selby either. The old and the new are built as one now, past and future meeting to signal a continuity of faith on this site that stretches back a thousand years. 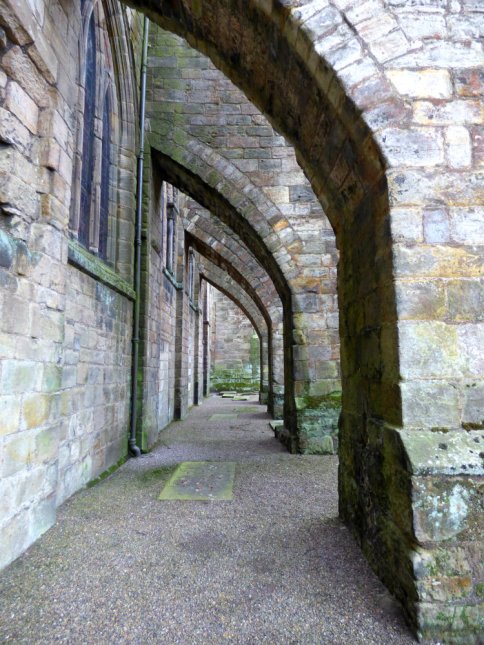 The nave still stands, supported from the outside by massive buttresses, from the inside by the gigantic columns, two carved with the distinctive chevrons of Norman architecture that are echoed in window and door and two with a spiral pattern. Later stained glass sits high in the walls, framed by ornate Norman arches.

Perhaps the most surprising discovery was a painted ceiling in the aisle of the nave. Dating back to around 1500 it shows the four Apostles. It is thought the painting would once have covered the entire ceiling. It is an odd, imposing place. No windows at ground level, only set high in the walls where the light streams in… but no warmth. We were frozen and escaped into a cold and icy January afternoon to warm up.

We wandered over to the ruins, looking out over the refectory and up the guard tower, accompanied by yet another robin. There was too much to see for a brief visit… we would have to think about coming back. Preferably in warmer weather. Though of course, the bitter chill had meant we had the place to ourselves. 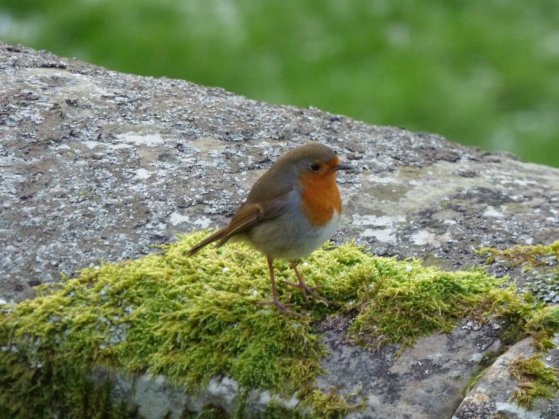 The whole trip was beginning to have a familiar feel. Our usual modus operandi frequently involves the concept of the ‘raid’… falling over something, doing a recce, letting it sink in and the dots join up in historical and symbolic terms… then deciding we’d have to go back. Not that a trip to Scotland is ever a hardship, of course. And we had no idea what we might fall over next…