The parking ticket was heading towards its last hour as we headed for the remains of St Rule’s church within the Abbey precinct. The little church was built in AD1130 and although only a shell now remains, its tower still rises a hundred feet high above the frozen earth. And we were going to climb it. Of course we were. All a hundred and fifty-six steps.

The entrance is narrow and awkward through a rotating turnstile. It was tight even with a handbag and camera. Let’s just say that you wouldn’t want to get much broader in the beam before trying to get through. Which is really just as well because after a few modern steps, a short spiral of metal and a little half landing, you are climbing up a very narrow, winding staircase, with a long drop to the bottom. 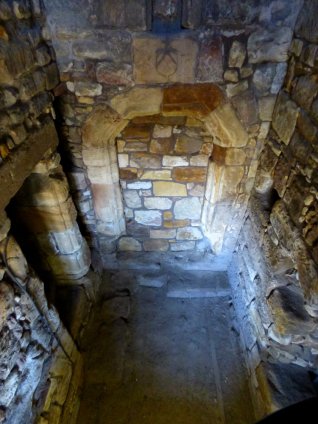 You do, however, get to glimpse the ghost of the church… a bricked up doorway, and intriguing alcove, an armorial device surmounted by a cross… Then a little higher are the niches that would have held a statue… of St Andrew, perhaps, whose relics were once housed here until the religious upheavals of 1559 led to the destruction the shrine. The relics were lost… destroyed, removed or hidden. It is not known what happened to them, though the Roman Catholic Cathedral in the town now houses relics of the saint in the national shrine, gifted to St Andrews by the Archbishop of Amalfi and the Pope.

Higher still and the staircase narrows even further, making passing anyone on the stairs an interesting proposition. And of course, we had to, as there were workmen consolidating the mortar… several of them… we got to know them almost intimately as we squeezed precariously past, the workmen either flattened against the outer wall or dangling perilously from the centre of the spiral.

It was worth it though. To stand up on the top of the tower, looking across to the hills, some white with snow that seemed out of place on this beautiful day. Below the whole of the Abbey precinct could be seen clearly. You could see, too, that this tower had been built as a beacon of faith to guide pilgrims to the shrine, towering above the surrounding buildings and landscape even today.

In front of us the town, behind us the sea. It would, if lit, have been a beacon from the sea too, standing high on its rock. To our left the road leading through the hills that we had travelled that morning. And to our right the castle, its curtain wall enclosing it’s space as it has for centuries.

The castle had been the principal seat of the bishops of St Andrews for whom it was built at the beginning of the twelfth century. We had been advised to visit the place to see the mines and countermines and the infamous bottle dungeon, hewn from solid rock, for the castle had played a major part in the events of the Scottish Reformation, until its last occupant, Archbishop John Hamilton was hanged in 1571 for his support of Mary Queen of Scots. The castle fell into disrepair and in 1801 the great hall fell into the sea and was lost.

The sea wall was built to prevent further erosion in 1886, but standing on the tower, watching the endless wash of the waves, it is evident that without our continued intervention nature would take back even the stone of the wall that keeps her at bay. Nature has one thing we do not… she has time. A thousand years… to us a history, to her a single heartbeat. The light shifts and changes, the sea reflects the ever-changing colours of the sunlit sky. So many changes in our beliefs and viewpoints, in our expression of faith and the communities we form, just on this one single spot. Yet beneath the hewn stone and the tarmac, the earth has not changed, but remains constant, even in her seeming changes of climate and season.

Far away my eyes find a pathway on the surface of the sea. On the horizon, the shadow of a phantom isle plays with the clouds. Beneath the waves was once a country, populated by man and beast… a whole continent that we now call Doggerland. The hunters then could have walked from here to Denmark in the east, Ireland in the west. Just a mere eight thousand years ago. Not so very long against the lifetime of the earth.

Looking down on the tiny figures and great edifices from this height, we can see the fragile life of man set against the immensity of the earth. Birds fly through the air, lichens grow on the stones we have shaped, a black dog plays on the sand… fish swim still in the sea. And man walks or drives his machines and thinks himself immortal. Such moments in such places shift the perspective indelibly.

5 thoughts on “Discovering Albion- Day 7 : High as the Sun…”