… As Merlin prepared to leave once more

for the wild woods of Caledonia

his sister, Ganieda, attempted to dissuade him

arguing that it would make more sense

to winter within the city and return to the woods in spring.

“I could live in the forest the whole year through

if only I had an abode in the woods which

would afford me shelter and respite from the winter.”

So saying Merlin went his way into the wild,

whilst Ganieda saw to it that his wish was granted.

She had built for him an observatory of the night sky,

on the edge of the forest, and furnished it with the

wherewithal to withstand the harshest of winters.

in the forest but in winter he retired to his

observatory and there watched the heavens

and made prophecies concerning the affairs of men. 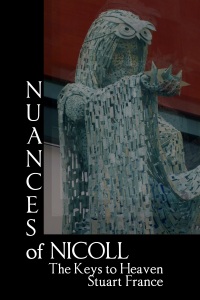 The Keys to Heaven

Psychologist, Maurice Nicoll studied under Fourth Way exponents G.I Gurdjieff and  P.D. Ouspensky, and presented his own philosophy in a series of works published during the Mid Twentieth Century.

In his seminal work, Living Time… he makes no bones about insisting that the psychological states and concepts that he is expounding, and their utilisation, are ancient and stretch back through Christianity, Judaism, the Greek Philosophers, and on into the mysterious climes of Pre-Dynastic Egypt…

In re-presenting these ideas as a series of poetic explorations, author and essayist, Stuart France uncovers a series of links with the Mediaeval Traditions of the Northmen and the Matter of Britain!

What is the original story of our week? How does the moon harrow hell? Prepare to be enthralled, entertained, educated, and enlightened, as new light is shed on the enigmatic figures of Wotan, Merlin, and King Arthur.

They do not write books like this anymore if indeed they ever did!