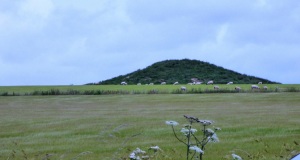 … “Shame on you,” said the old man as he struggled to his feet, “to think that such mighty men cannot tie one small sheep.”

He took hold of the sheep, dragged her easily to the wall, and re-tied the broken rope.

Fin and his Merry-Men were somewhat aghast to behold these uncanny proceedings but before they could inquire of the old man he again called to the girl below stairs.

“Come and get some more food ready for Fin and his men.”

Up came the girl again and before long a feast fit for kings again lay before Fin and his Merry-Men.

“Now you tuck in good and proper,” said the old man, “you’ll have no more trouble from my sheep.”

So, Fin and his Merry-Men ate and drank their fill until, feeling well sated, they drew their chairs back from the table.

Fin had a mind to speak with the girl but when he went down to her she said, “You had me once, you have me no longer, and you will never have me again.”

Fin turned on his heel and went back to his chair.

Then Dermot went down to her and got the self same response.

The same happened to all Fin’s men even though none of them had ever met the girl before.

Ossian was the last to go down but him she led back upstairs by the hand, and across the floor, with her until she stood before Fin.

“Fin Mac Cool,” she said, “ever has the fame of you and your men, for prowess, spread throughout the land yet you all failed to tie the sheep.”

“Is there a solution to this riddle?” asked Fin.

“Things in this hovel are not what they seem,” said the girl, “the sheep, is Strength, the old man, is Death, for none other but death can overcome strength itself,  and I am Youth. I can give each of you whatever gift you ask of me.”

Each man in turn asked for what he wanted.

He asked that he might lose the stench of clay that had clung to him ever since the day he lay alone with a dead woman.

Conan asked for invulnerability in battle and the strength to slay hundreds.

Dermot asked for a love spot on his body which would cause every woman who saw it to fall in love with him.

Finally, Ossian asked for the ‘Grace of God’ and was taken by the girl to the Land of Youth until Saint Patrick came to Ireland.

1 thought on “Gate to the Land of Youth: Old Man…”