Squirrels play in the trees, great piles of stones lie in the shadows like strange beasts; streams, clear and iron-red, join and run together as we follow in the footsteps of memory in search of a lost standing stone. “Of course, my memory may not be entirely accurate…” Now he tells me… Still, it is cooler under the trees and there is only one path, heading along the back of the woods behind Chatsworth. It isn’t as if we could get lost. Marginally misplaced, perhaps, but not lost…

Of course, then we hit a crossing of the paths and chose to go straight on, mistakenly thinking this had to be the way to go. The path went arrow straight as far as we could see… which, sadly, wasn’t all that far. It then decided to look more like managed parkland than woodland so we knew we must be just above Chatsworth house… then it veered away sharply to the right and towards the moor.

“I don’t remember it being this far…” There was no sign of civilisation for what appeared to be miles, but the track was clear and we plodded onwards through Stand Wood. Once or twice we met families with toddlers happily trotting along. It couldn’t be that far now, surely? Their little legs were a reassurance.

The lakes were a surprise and the last of the Eccles cakes were consumed as we watched the tiny frogs and clouds of midges on the banks of the calm waters. The walking shoes had come off again. They may be great for safety, but they do get hot! Eventually, we wandered, more by luck than anything else, into familiar territory and sat by the steps of the Hunting Tower looking down on the house that we had thought we had passed long ago. Memory does some odd things over time, and concertinas the highlights, taking out the ordinary moments in between. Now, however, we were back into the ‘right,’ kind of woods and territory not too unknown. 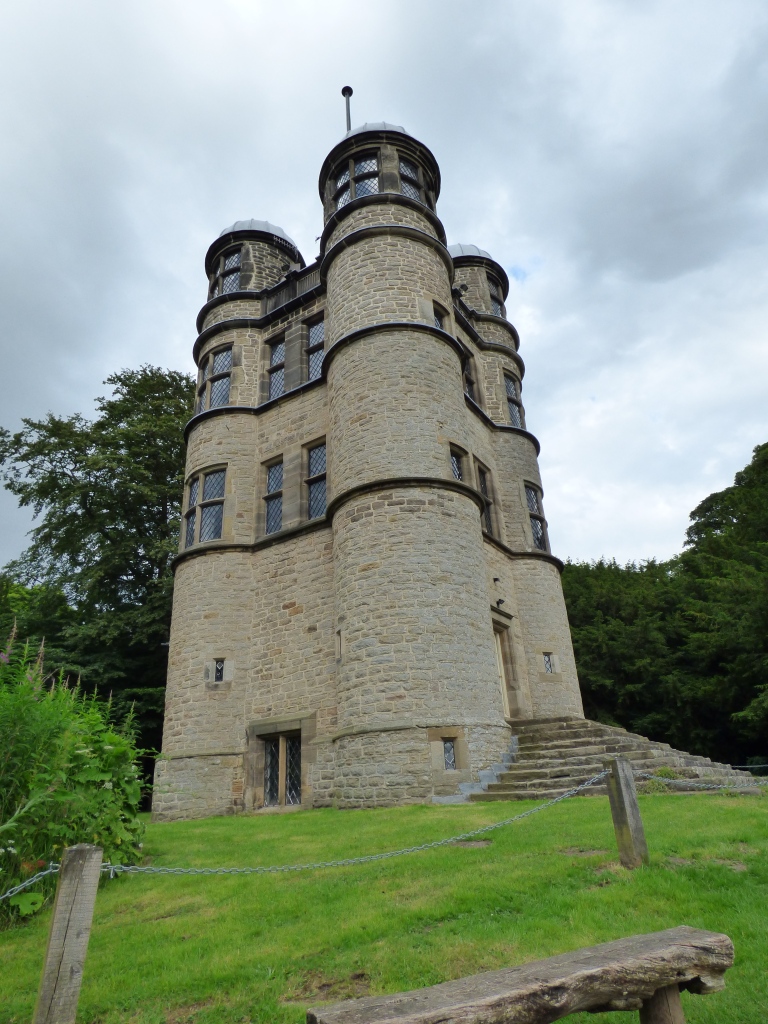 The sign at the forking of the path said ‘Baslow 1 mile’. All other options were discounted at this point as we followed the narrow path through the trees… the car was in Baslow and it was now getting late. We had come in search of a standing stone…a big one… and for the second time it had eluded us. At least this time I wasn’t dripping mud. But the path looked right… there was the wall at the bottom… still no stone though, and nothing on the information board either….

We did get an unexpected flypast though as the precise ‘V’ of the Red Arrows flew the length of the park as we walked towards the Kissing Gate that leads back into Baslow… and the pub. Footsore and hungry we headed into the Wheatsheaf for dinner. The stone was still undoubtedly lost… for now. On the other hand, we had walked through wood and moorland some seven miles according to my map, a lot of it uphill… met a faery lady selling ice cream, seen some strange and wonderful places and, surprisingly, stayed pretty dry. We had talked and worked on the hoof, shared the silence of the moors, and drunk deeply of the green light beneath the trees. An odd day… but a good one.

Back at my friend’s home, we sat with wineglass in hand discussing the weekend. Eyes watched movement that ran the length of the room.

“That black, winged thing… It wasn’t a bird…”