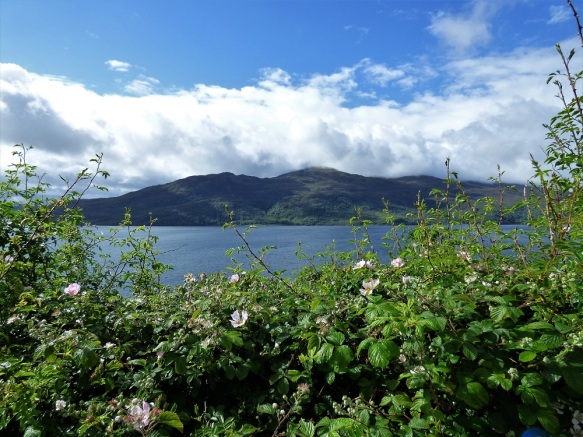 We had a day to play on the Isle of Skye… there are undoubtedly many worse things to do with a Monday morning. Crossing the Skye Bridge in brilliant sunshine, we were certain of a lovely day’s exploration. Across the water, tantalising islands rose from the mist. Blue peaks gave us shy glimpses and there may have been squeaking from the driver’s seat. 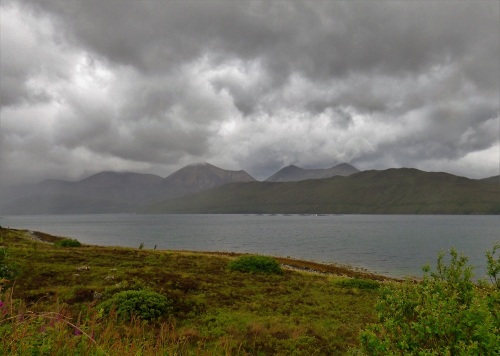 Ten minutes later, as we pumped up the ever-deflating tyre yet again, the heavens opened. Serious clouds, heavy with rain, emptied themselves upon the landscape, filling countless streams to overflowing, nourishing the waterfalls and silvering the morning.

It didn’t matter… we had decided to drive first to the little ferry port of Uig so we could see how long it would take and know the way for our early start the next day. Meanwhile, we were keeping our eyes open for a bed and breakfast with a ‘vacancies’ sign as we had booked nowhere for the night. Somewhere close to Uig would be handy. Mind you, we were making slow progress, as every turn in the very twisty road opened new and magical vistas and, wherever possible, I wanted to stop and look. Overwhelmed by wild beauty, I didn’t think it could get much more magical… until the sea became a rainbow. 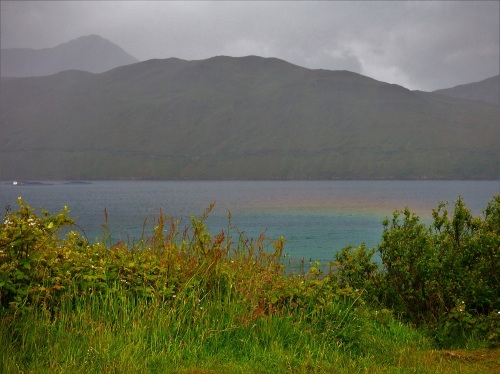 Had we not realised before that ‘stuff’ was afoot, we should have been left in no doubt at that point, but, with the curious blindness that descends when the land has things to teach, it would only be afterwards that we would see the patterns forming. For the most part, we wandered through the day oblivious, except to occasional small nudges that tugged at attention and made themselves felt. 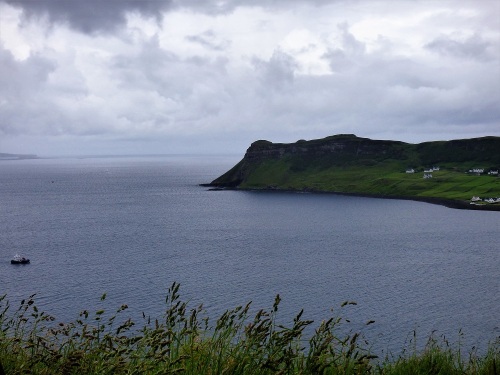 For a start, ‘only three ancient sites on Skye, according to the usual sources’ should really have rung alarm bells. The archaeological record goes back to Neolithic times and, we found later, the island is fair littered with prehistoric artefacts, not to mention sites that go back to the times of saints and legends, a huge amount of fairy lore and with the Norse history thrown in for good measure. Three sites? And we did not question this at all, except to say how odd it seemed?

An island with such a long and rich history had to have more than the three, rather uninteresting sites my sources had suggested. For a start, we passed two huge standing stones on the way to Uig, just casually hanging there beside the shore. Both of the Kensaleyre stones are man-height and substantial… and turned out to be where, according to legend, Fingal, the King of the Isles… who might just be the legendary Fionn mac Cumhaill… had erected the stones, on a hunting trip, to hang a cooking pot large enough to hold a stag. We couldn’t find anywhere safe to park, though, so the stones… although we were to pass them several times… remained just out of reach. And that seemed to be a bit of a theme when I started researching later.

We made it to Uig in a sensible amount of time. We parked by the Norman-style tower known as Captain Fraser’s Folly, built around 1860 by the landowner, Major William Fraser. Like many others at the time, he was heavily involved in the cruel Highland Clearances which evicted tenant farmers from their land to turn vast swathes of it over to more profitable sheep-farming. In a rough sort of justice, his home was washed away by floods in 1877. You really shouldn’t mess with the folk of a fairy isle…

Just above us, had we but known it, was another standing stone and a stone circle. A stone’s throw away, an ancient settlement, a couple of early stone towers, the odd chambered cairn and the beauties of the Fairy Glen… Quite what the fae-folk were playing at by throwing so many blinds in our way was open to question, but something was definitely going on… even though we were still not entirely aware of it.

Instead of wandering through beauty, though, we sensibly headed down into the little port to collect our ferry tickets for the next morning. There was a handy garage with a fuel pump and airline next to the pier… we could fill up both tank and tyre again in the morning. Perfect! Well, we thought so… but the Old Ones must have been laughing up their sleeves…