Something was taking a lot out of us. It wasn’t just the lack of lunch, as we’d had first and second breakfast, even if that had been hours earlier. It wasn’t the weather either… we’ve endured worse and at least we were in the car. But there came a point where we were obliged to pull up in a crowded car park beside a loch and, instead of raiding the food van that we had at last found… we fell asleep. Neither of us could stay awake and both of us fell to dreaming… the first of many vivid dreams we would have on that trip and since. Just to add a touch of irony to the situation, considering we might have felt better for coffee or food, when we woke from our short nap, the food van had closed its shutters. And that was that… we were back to square one.

That was a shame because if we’d been fed, we might have braved the weather and climbed up to greet the Old Man of Storr. He is an odd one… and no-one is even sure exactly which bit really is the venerable gentleman for which the hundred and sixty-foot pinnacle was named. Some say you can see him in the rock shard itself, others point out the profile seen in the Quiraing, the landslip that rises majestically behind the Old Man. Maybe it is both, for there is a clear face on the pinnacle and a perfect, reclining profile on the hills, especially, we were to find, when seen from off the island.

The basalt gives the hills a distinctly otherworldly look. It is a fabulous landscape, used in many films including the classic Wicker Man and, more recently, Stardust and Snow White and the Huntsman. The area is sparsely inhabited today, but it has seen all kinds of residents over the millennia, including the dinosaurs whose footprints were found at An Corran, not far away, and the Mesolithic peoples who later lived in the area.

The land around the Old Man is called the Sanctuary, and the approaching hills have a look of the ‘mangers’ we have seen at other ancient and sacred site. Here, it forms a natural amphitheatre down which sheer waterfalls tumble. There is no suggestion that this was revered in antiquity, at least, not according to the archaeological record, but there is no question that such a striking feature would have gathered about itself as many legends and beliefs as it does clouds… all of which it seemed intent on emptying on our heads… and would have undoubtedly played a part in the beliefs of the area in ancient times. It is not as if you can just ignore it… 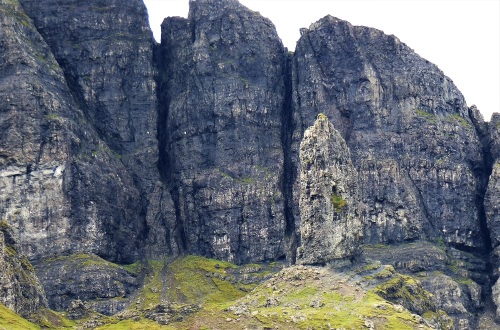 One surviving legend says that the Old Man is the thumb of a giant, left protruding from the earth when he was buried. Another says the rocks were carved by a brownie who had formed a friendship with a human who had saved his life. When the man’s wife died, the brownie sculpted the pinnacles as a memorial. Another tale says the pinnacles are giants, fleeing from their enemies, who made the mistake of looking back and were thus turned to stone.

Still another tale says that they are a loving couple who had lived long together, walking nightly up to the Sanctuary. When the wife was too old and the man grieved, the faeries who had watched them through their lives offered him the gift of having his wife with him forever and, when he accepted, turned them both to stone. The fae-folk of such tales were not some Victorian fabrication, flitting like butterflies through the flowers… they were denizens of another level of reality, dark, mysterious and perilous by human standards.

Curiously, the area around the Old Man was the first place that the mineral gyrolite was first found. Gyrolite forms as spheres within volcanic bubbles in basalt and looks rather strange… like some kind of accumulation of magical eggs. While I have been unable to find any reference for its practical uses, it struck me as interesting that one of the metaphysical properties it has been assigned is that of giving insight into ancient civilisations. Perhaps sleeping with stones would be the way to go? And that turned out to be a prophetic idea… 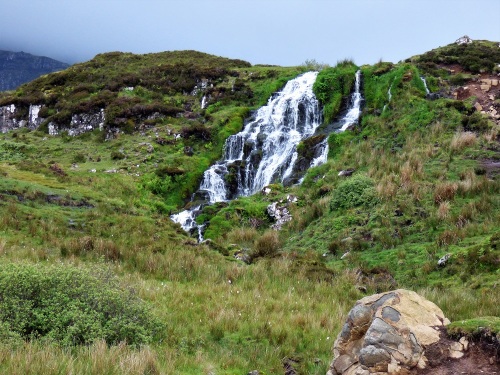 We continued our tour of the sodden island, passing waterfall known as Bride’s Veil, and singularly failing to find anywhere open that served food and coffee, or offered a night’s lodging. We even failed to find a parking spot in the one place we would probably have found both… the town of Portree was full to the brim with not one parking space to be had.

Eventually, we had done a full circle of the island’s main roads and, finding ourselves back in Uig by late afternoon, finally managed a scone, a pot of tea and a shop to replenish the supplies in the cooler-box. All we needed was a place to stay for the night. Perhaps if we looked down one of the other roads we had passed? There had to be something… hadn’t we seen a castle signposted?