The lady in the tourist information office in Bakewell looked mystified. She shook her head slowly, casting what I can only term a pitying look my way. “It is probably just a myth, you know.” Well yes, I know that… though I object to the ‘just’; myths hold their own reality. But tales of slain virgins, giants and mysterious, cream-fed workmen who are never seen by daylight do have a tendency to come under the heading of myth and legend. The geological features associated with the stories, however, usually have a pretty solid presence in reality as we accept it and it was of these I was fruitlessly seeking information.

I’ll give the lady her due; she tried… but was unable to come up with any more precise a location than I had for the Warren Stone and its attendant spring, the final remains… according to the legends… of the giant and the defunct virgin in question. She had never, in fact, even heard the legend nor had her colleague, which surprised me. She did, however, give me a phone number of someone who might possibly know a little more. Strangely enough, it proved to be the writer whose book on the stone circles of the area has proved invaluable on our travels. As it was an office number and it being a Sunday afternoon, unfortunately that wasn’t going to be a lot of help on this particular trip. There was only one thing to do… we’d have to go and have a look.

“Near Ashford” said the only directions I had found, and the legends referenced both the hillfort of Fin Cop and the faery castle we had visited on Friday. Logically, therefore, the island known as the Warren Stone should be in the river Wye somewhere between there and Ashford. It gave us a start. We drove to the village, wondering if we would be lucky enough to find the little shop open. Sure enough, not only open but full of local people… none of whom had ever heard of either the legend or the stone.

The river runs around the edge of the village and the island is in it somewhere. Not even aerial photos had helped so far as the shadows of the hills cover the course of the water. Legwork was going to be the only way forward for now. We checked from the old packhorse bridge with its sheep dipping pen where the lambs were kept to lure their mothers through the water for washing before being sheared… nothing in sight except the glorious autumn colours reflecting in the stream. 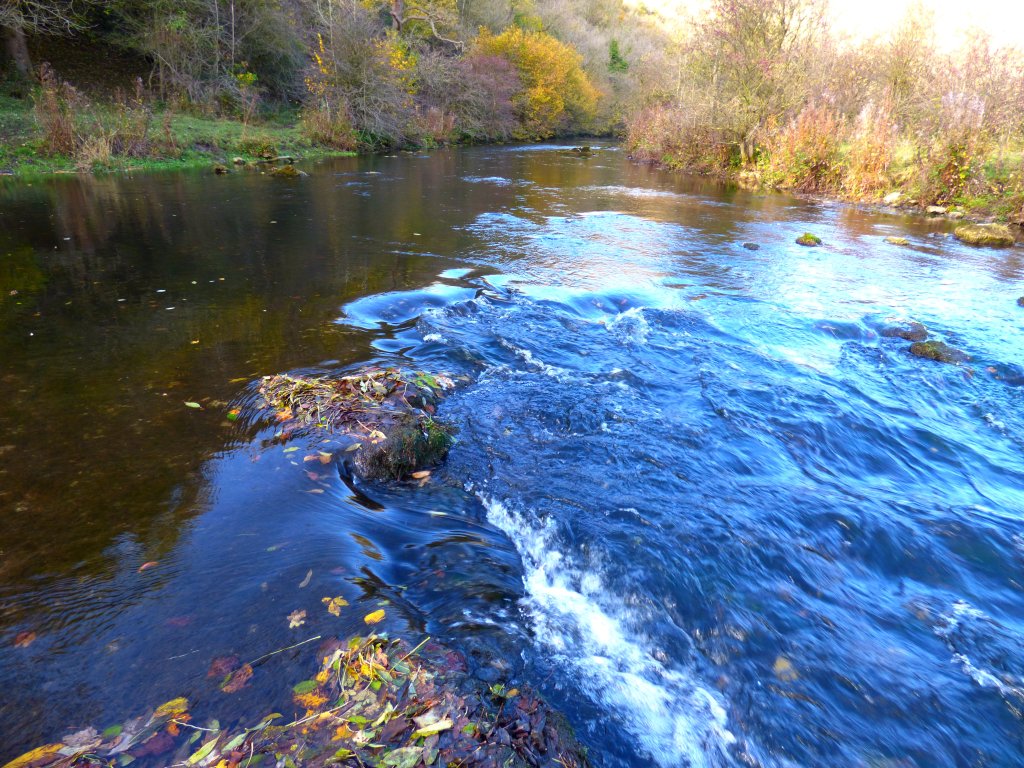 Regaining the car, we followed the course of the river, keeping our eyes peeled for likely outcrops, until we found a parking area beneath the flanks of the hillfort itself. We couldn’t see the stream from here so we set off on foot to explore some more. The ground underfoot was soggy and stepping stones to the stile made the shallow pools of water look awfully like a spring. It couldn’t be that simple, surely? We couldn’t get down to the river from there to check, though. The ground squelched and neither of us had thought to change into sensible footwear this time. Another possible spring washed its way through the mud and ran down to the river. I followed it, hopping from tuft to tuft of grass in the hope of staying relatively clean while my companion took a look higher up to see if he could find the source.

There did seem to be a kind of island in the stream, but I couldn’t get close enough to tell if that might be what we were seeking before a third possible spring confused the issue further. Any or all of these might simply be run-off from the recent rain. By this time I am alone in a small and very muddy copse of trees… alone apart from a handful of cows and what looked suspiciously like a bull considering what he was up to as I arrived. A bull with horns too. I stood still, enjoying their presence. There was no sense of threat and as my companion arrived the bovine guardians of the stream calmly stepped aside to let us through, closing again behind us.

We followed the river, almost meeting the point we had walked to from the opposite direction on our first visit. We had no luck, I have to say, in finding our quarry and decided that a retreat was in order, and a return with both better information and footwear would be a good idea. So we turned the car back towards the city. There is always a reluctance at this point of the weekend… the adventuring is over until the next visit, and though the quest continues with research and realisations on a daily basis there is nothing quite like being able to get the feel of the land itself as you learn. It may sound a little strange but somehow it speaks to you and tells you more than any book or webpage and its beauty brings the stories to life.

There was, however, no reason to hurry and we called for a half of Stowford’s at a pub on the way back. Perched at the bar my companion picked up the village magazine and flicked the pages in a desultory manner. Then his face changed and he placed the thing under my nose.

Well, at least someone has heard of the Giant of Fin!

1 thought on “Searching for giants”