We were at the little port of Uig early… we were leaving nothing to chance. We knew there was a restroom we could use, a garage and, if it were open at that time of morning, a café where we could get a cup of coffee, all within yards of the queue for the ferry. Sorted.

Not knowing what the amenities were on Harris, and with a very soggy, self-deflating tyre, we decided to use the facilities, then fill up with fuel and air. The garage was still closed for fuel, but the air-pump was just around the side. I put the pound into the machine, attached the hose to the tyre and waited. Nothing happened. We tried again, another pound… still nothing. With the third pound, the pump did do something at last. Unfortunately, it was the wrong thing… and we were left with a totally flat tyre that was now taking us nowhere.

You can imagine how we felt. Miles from help, unable to move, with half an hour before the garage would open and forty-five minutes before the ferry queue closed… and we were right next to the queue and helpless!

It seemed we were not meant to go to Harris after all. And that is the problem with the way we work… it is okay to call in places as we pass. It is fine to have a general meander somewhere we fancy seeing… as long as it ties in with whatever we are working on at the time. But heaven help us if we try to force the issue and go somewhere just because we want to… we have to wait to be ‘called’. If not, we are either prevented by some strange occurrence… like exploding coffee pots and third degree burns… or we will ‘get’ very little beyond the surface stuff.

Now, I was pretty sure we had been called… all the signs and coincidences and general weirdness were there. But then, we really wanted to get across the sea to Harris and Lewis…

I usually carry an air pump, but had not repacked the car after clearing the boot to pack it with the stuff for the last workshop. After a night in the car, my phone was completely dead. That’ll teach me to forget the car-charger. Stuart’s was little better… but he did have a bit of battery left and so, feeling an idiot as I explained the problem, while sitting in a garage beside the offending air pump, the RAC were summoned.

They could, they said, get someone there in fifteen minutes and, as long as my spare was okay, which it was, we’d be on that ferry. Twenty minutes later, with no mechanic in sight, the phone rang. It was a garage in Portree. The job had only just reached their system. It would take a good half an hour to get someone across the island and then they would have to change the wheel while we watched the gates close on the ferry.

I explained the situation. The kind gentleman said he’d ring me back… and he did, very quickly, but not before we had hit an all-time low. To be so close… to have paid for the trip… ‘wasted’ a day wandering around Skye and a night in the car… and not to go? It didn’t bear thinking about.

The garage had one of their mechanics living locally. Did I have the tools to change the wheel? I did… not that I could have used them when the wheel had been put back on with a hydraulic gun in Penrith, or I’d have changed it myself by that point. Fair enough, said the kind gentleman. If the mechanic hadn’t left already for work, they would send him out to help… but he would have to get his children to school first.

We were in a touch and go situation… would the mechanic get there on time and be able to change the wheel, or would the ferry close the loading gates while we watched from the shore? We were counting minutes…

By this time, it was after eight and the loading gate closed at eight-fifteen. The battery on the phone was getting dangerously low, Stuart could see someone in the garage, but they weren’t opening the doors, there was no sign of our mechanic and I was cursing the tyre-place in Penrith where we’d had the damned thing professionally checked just a few days before… only to be told it was fine. Yeah, right. 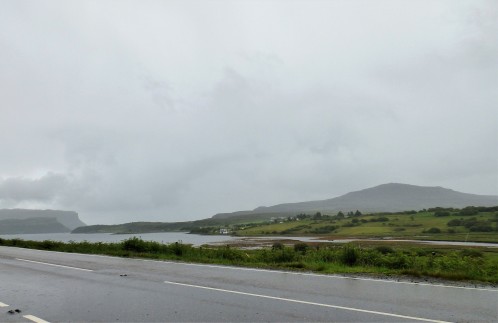 Then Stuart reappeared. The woman from the garage would be out to look at the pump when she’d done opening up. We waited for what seemed like hours before she arrived. “Somebody,” she said in clipped, terse tones, glaring at me, “has been yanking the hose.” As she spoke, she opened the front, attached a hose with such ease and so little investigation that it must have happened countless times before, flipped a switch inside it and left. We scrabbled around for yet another pound, and within seconds, the tyre looked healthy again. We were on our way. But not before the mechanic turned up, his children still in the car, relieved we had found a solution. We were just grateful that he’d been willing to come out… even though he would probably have been too late. That little act of kindness had kept hope glimmering in what seemed an otherwise hopeless situation.

We got in the queue for the ferry just before the allotted time. I was on tenterhooks until the car was loaded, but then… standing at the window as the engines rumbled into life, there was elation.

I didn’t care whether or not I was going to be horribly seasick for the next couple of hours. Or whether the tyre was going to be flat as a pancake at the other end. Whatever happened, we would deal with it. After decades of waiting for ‘one day’, and barring stray icebergs, freak hurricanes or wandering whirlpools… we were actually going to Callanish!

3 thoughts on “Dreaming Stones: Disaster, Panic and a Touch of Magic…”