The ‘end’ of the road we were travelling through Harris took us to Rodel. It is not exactly the end as the road carries on, circling the island, through the hills and back along the eastern seaboard towards Tarbert… but it narrows to little more than a single car width and, with a ferry to catch, driving it would have to wait for our next visit. We already knew there would be one, some day. But, for now, we had a church to visit… and the road seemed to follow a spiral path up the mound on which it was built.

The church of St Clement is, according to everything you read, considered to be the finest medieval building in the Western Isles. And, although there are doubtless many other places of worship scattered through the villages, it was the first church we had seen since our arrival that resembled the ones with which we are most familiar. 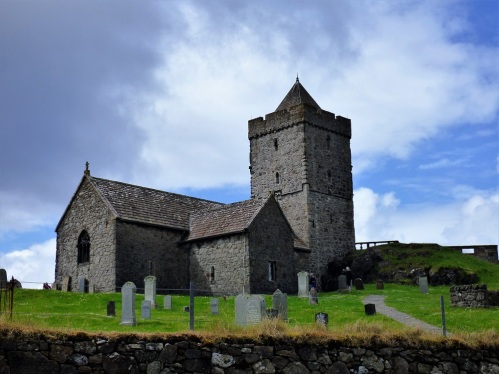 St Clements is built upon a rocky mound, probably on the site of a much older church…and possibly on an even older sacred site. While we saw no direct evidence for that here, it was a common practice in the early days of Christianity to adopt the ancient places of reverence… indeed, it was encouraged by Rome. There are, however, prehistoric rock carvings close by, a standing stone not far away, as well as a possible submerged stone circle a few yards out to sea.

The first thing that strikes you about St Clements is its position, high on the rocky mound, with graves cut into its slopes and the now-familiar burial enclosures. The next thing is that the rocks themselves form part of the fabric of the church, with the tower being built over and around a large outcrop. 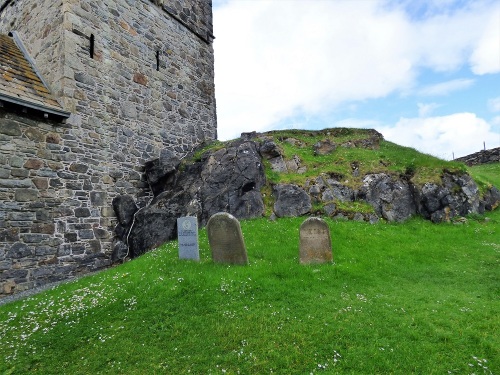 The church is built in the shape of the Cross, using local Lewissian gneiss. Some details, like the wheel-headed window above the altar and, as we would see, the arches within the church, are of a darker stone, flecked with minerals that catch the light and sparkle like diamonds in the sunlight. The whole building seems ‘right’ within the landscape, with the stones themselves telling the story of humankind’s earthy life with its hints of something ‘beyond’ in the glimpses of illumination. 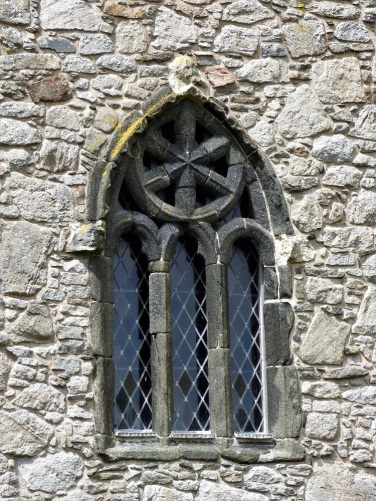 Work on the present church began around 1520, at the instigation of Alexander MacLeod, known as Crotach, referring to the hunched back acquired fighting with the MacDonalds of the Isle of Skye. 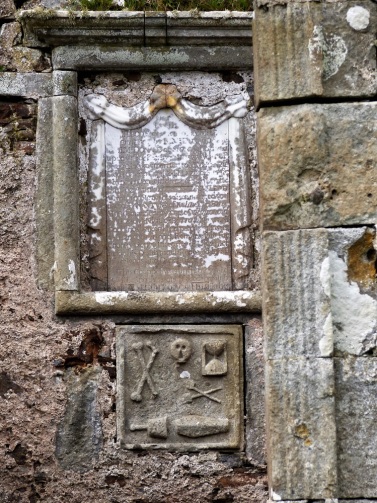 The church became a burial place for the MacCleods of the island for centuries, but we were also to see MacDonald memorials in the churchyard, including the tragic stone dedicated to eleven year old John MacDonald, who fell through the ice and drowned in 1917.

The church fell into disuse soon after its construction, when the Reformation changed the nature of worship in Scotland, yet the McCleod burials continued to take place at the site and the churchyard holds many graves bearing that name, while the church itself bears many of the family’s heraldic symbols.

Captain Alexander MacLeod of Berneray restored the church built by his ancestral namesake in the last years of the eighteenth century. Above the door, a plaque commemorates the further restoration of the building in 1873 by the Countess of Dunmore.

Beneath the plaque is a carved crucifix that looks, at first glance to be a weathered face. There are many carvings on the outside of the tower, with bull’s heads, a beast associated with the Clan MacCleod, set into the string-course.

There is also a carving of a man wearing the ‘big covering’ that eventually evolved into the kilt now associated with Scotland. 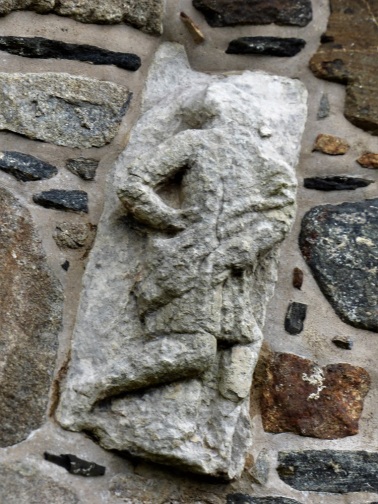 But the bulls and other heraldic beasts are the least surprising of the medieval carvings set into the walls. Two figures would seem out of place on a church to modern eyes… and downright offensive to many. An attempt was made to censor the gentleman when the Countess sent one of her men to the church, armed with a gun and instructions to shoot off the salient points of the carving that she evidently found salacious.

Another figure is the oddest Sheela-na-gig we have seen to date, with the perspective seeming off-kilter. Perhaps the carving was supposed to look as if the figure were reclining and facing the viewer, but the stonemason lacked the skill… or perhaps we have lost the art of reading these so-called ‘primitive’ works.

The Sheela also seems to be holding something… a child, perhaps? If so, she hardly fits the official line of being placed on the church to ward off evil and seems to be more a celebration of the function of Woman than a depiction of Original Sin. 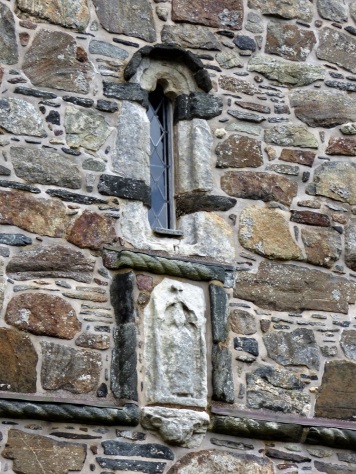 It is a peaceful place, at one with its landscape… and its stones, mound and enclosures seem almost to echo the earlier landscape of prehistory. There is a familiarity about the place that has less to do with it being a medieval church than it has to do with the continuity of the human story. I was glad we had made the journey down to the southern edge of the island. And that was before we went inside…