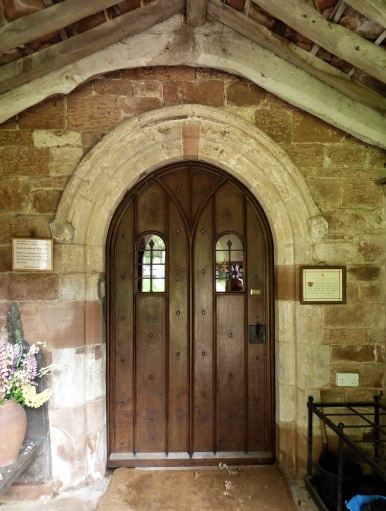 We pushed open the door to St Oswald’s church. It is still with a feeling of anticipation that we cross the threshold of these ancient places of worship. Churches that look incredible from outside have sometimes been so unsympathetically restored and reordered over the centuries that they lack all character. Others, with unpromising exteriors, reveal wonderful things at their hearts… we never know what we might find. 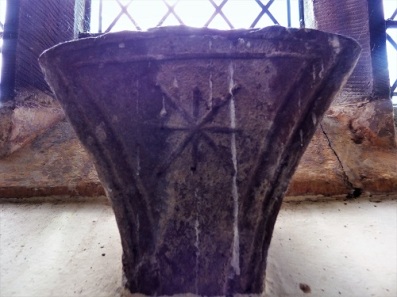 St Oswald’s church in Kirkoswald is an old one. It is likely that there was an early church on the site before the current building was begun nine hundred years ago. Nothing now remains of the original building, which would probably have been made of wood, though a fragment of a wheel cross, inscribed with an eight-pointed star and around twelve hundred years old, still rests in a window embrasure. 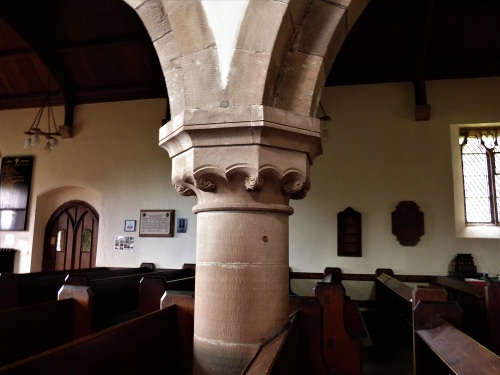 In the nave, the Norman columns remain from the twelfth-century church, but most of the main body of the church dates to the thirteenth century, while the chancel was added later, in the sixteenth century. 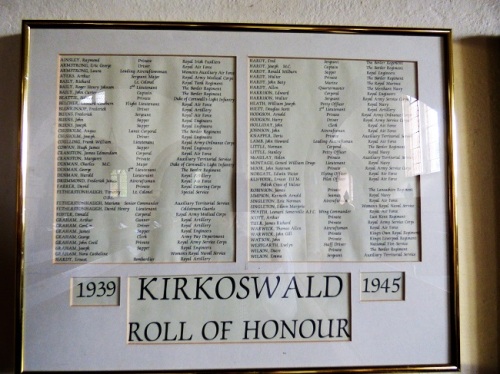 The church has served the village and its people for hundreds of years. Although it was granted a market charter in the thirteenth century, the village never grew into a town. The Roll of Honour testifies to how many men and women from the village lost their lives in war and you can only imagine the effect such losses can have had in this small community.

The ends of the pews bear the shields of notable local families, carved or painted, and echoed in the heraldic stained glass windows of the chancel, created by John Scott of Carlisle. The area was once an important one, and the village still has the old moated enclosure, its castle and the ‘College’, a prestigious building from the time when St Oswald’s was a collegiate church, kept by twelve canons and a provost. 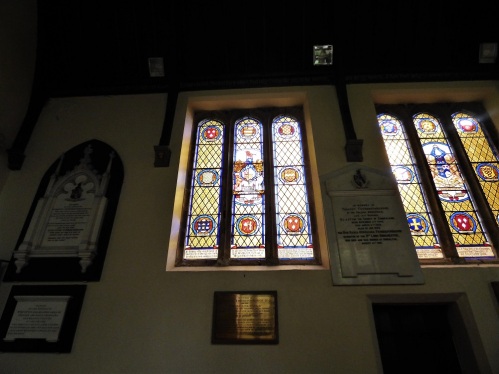 Part of the ‘College’ was once a Pele Tower, built in 1450 as a place of refuge and defence against the incursions of the Scottish Border Rievers. In 1547, after the Dissolution, the College became the home of the Fetherstonhaugh family, from Featherstone Castle in Northumberland. Given the details in the church, the history and connections, it was almost as if this old church were drawing together the threads of many workshops and adventures… 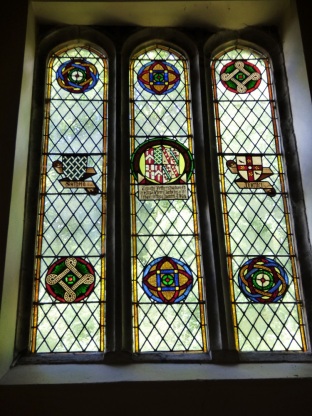 Some of the pews have wonderful ‘poppyhead’ carvings. The name does not relate to the flower, but comes via Old French, from the Latin word puppis, which was the poop or figurehead of a sailing ship. It had taken me a while to work that one out, as, although many of the church guides spoke of poppyheads on the ends of pews, none of them seemed to have any poppies on them… These particular pews are guarded by rather cheerful-looking winged beasts. 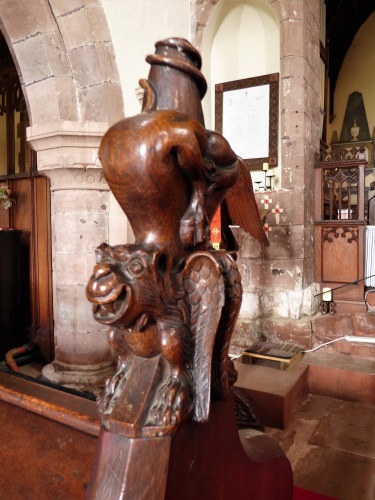 The font is a simple medieval bowl, almost unadorned apart from a later, wooden cover, remarkably similar to the one that covers the plain font at ‘our’ rainbow chapel in the south… one of the places that set us off adventuring. 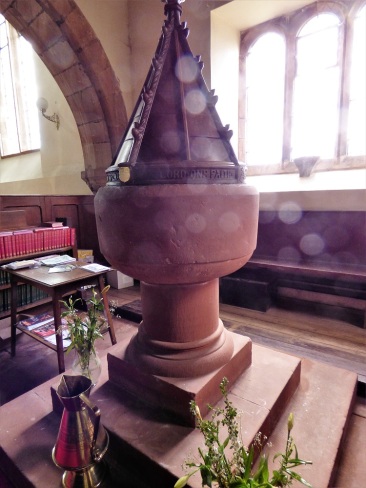 You couldn’t help noticing the accumulating ‘coincidences’. It was no wonder the two ancient faces supporting the arches appeared to be amused… 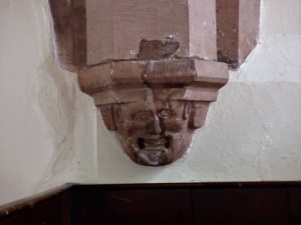 We continued to explore, taking in and documenting the details, knowing that we would, inevitably, be back at some future date, when the things we were seeing might have fallen into place and make a little more sense. 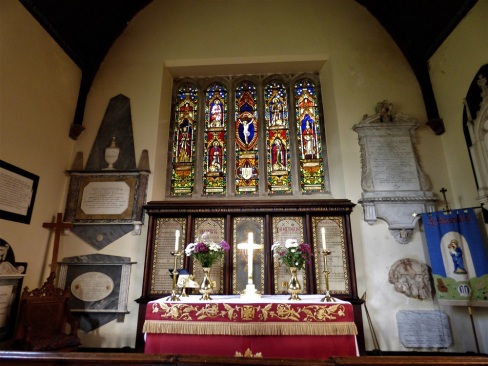 The simplicity of the nave is left behind as you pass into the chancel through its high, narrow arch. Light streams in through the stained glass bearing the arms of local families, Celtic knotwork and, above the altar, Christ in Majesty amongst the saints… including a portrayal of St Oswald. 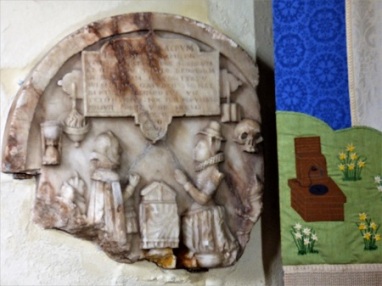 There are some rather grand memorials, although the one that caught my eye is a broken piece of alabaster dating to 1609, showing the deceased and his family flanked by symbols of time and death. 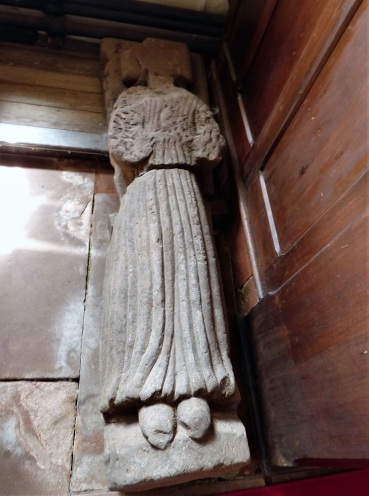 There is also a recumbent figure in medieval dress… and there was another on the pews as we took in the display in the south aisle. The wall is covered with pictures of chalices… which, after our visit to the holy well outside the church was both perfectly logical and somehow rather strange. 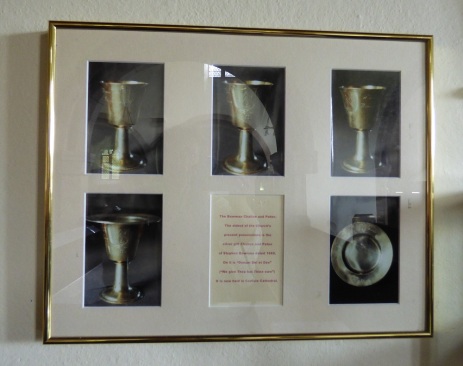 It is said that the Chalice used in esoteric work must be a gift and cannot simply be bought. After days in the ancient, sacred landscape, between the well, the carvings and the south aisle, we were suddenly ‘gifted’ with more chalices than you could possibly need to drive an idea into dense human minds… and we still had no idea what was going on. The blinkers were still firmly in place… but not for long… 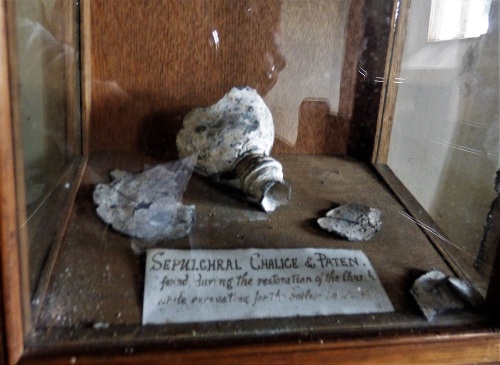