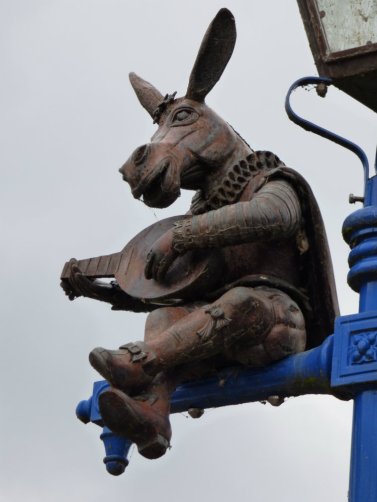 It was beyond inevitable in the current dictatorial climate…

Teigue-the-Fool had been banned from the Bunker.

As Big Bee had delighted in telling him,

his role was a distinctly Mediaeval Concept in any case.

“Better than being a political dinosaur,” smiled Teigue over breakfast,

which was now his only point of contact with his erstwhile charge.

“One of our few remaining national institutions,” observed Teigue dryly,

whilst tracing a question mark of HP Sauce over his bacon.

“None other,” grimaced Teigue, “It’s not as though you’ve not

already had a shed load of opportunities to get shut.”

“Displacing a Dame is not easy,” growled Big Bee grabbing the sauce bottle

and rather too enthusiastically shaking it over his breakfast.

The brown stuff emerged from the bottle in one almighty splodge,

smothering Big Bee’s breakfast plate, and everything on it…

Love and Death in the Time of COVID

‘The Gallows and Gibbet Inn’, proclaimed the sign, which singular nominal ought really to have aroused, if not my shackles then, at least my suspicions.

Too late, Anu was already tugging me over the threshold into the warmth, and the light, and the sound of voices, and music…

…They were all in there!

Black Jack Davey… Teigue-the-Fool… The Miller’s Son… The Sorcerer’s Apprentice… H.R.H. the Lord of the Elements, and one-hundred-and-one other far less savoury characters.

Most of them in their cups. Reprobates all! And what a tale they had to tell.

If you have ever wondered why all the public houses were shut.

You had better pull up a chair…

Get on the right side of history before its too late!

Now available in paperback and Kindle formats on Amazon