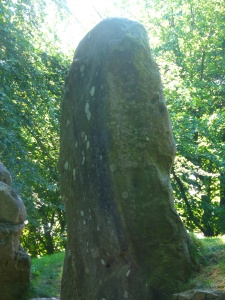 The earliest written sources appear late and are decidedly piecemeal.

Wayland is the son of a God, Giant, or King of the Otherworld.

He is schooled in metallurgy by Dwarves, whom, in skill, he quickly surpasses.

He lives, hunts, and works alone in a region associated with wolves and bears.

He finds her skin, appropriates it, and she lives with him for nine years.

At the end of which time she discovers her hidden skin and flies away.

Wayland is then taken captive by the King of Sweden,

maimed to prevent escape and set to work on an island…

and presents them to the king and queen.

Their teeth he turns into a brooch for the king’s daughter.

The king’s daughter has a ring of Wayland’s, stolen from him by her father,

and when it breaks she asks him to mend it.

Wayland inebriates the king’s daughter and fathers a son on her.

At this point, in the tale, Wayland’s swan-wife returns,

with a swan-skin for him and they fly away,

to the Blessed-Isles of Britain, together…

1 thought on “Wayland: Silver-Smith of Souls…”