‘Standing under’ and ‘hanging over you’? The immediate image to arise was that of the Sword that was hung by a single strand of hair above the head of Damocles when he experienced the trappings of power for a day… That particular ‘standing under’ brought understanding of the price paid in fear for worldly ambition.

Above, where seated in his tower,

I saw Conquest depicted in his power

There was a sharpened sword above his head

That hung there by the thinnest simple thread.

…so wrote Geoffrey Chaucer of the mural in the Temple of Mars, when the Knight describes the three Temples in Theseus’ amphitheatre…

The fateful Sword, though, could as easily have been a spear, or even an ‘arrow head’…  for the weight of the will of the people… or ‘sheeple’, as they/we are too often seen by those in power, hangs also by a thread when duly and justly exercised… 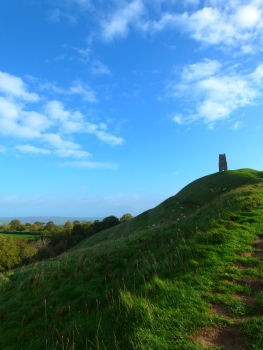 I was thinking about the whole ‘Troy Town’ dilemma too. So, if ‘Troy’ was originally a French ‘trois’, then two stones as three ‘stations’ of the labyrinth works. How about the ‘town’ though? The word could have been derived from the Old English tūn , which means ‘enclosure’ or ‘garden’. So, we would have the Garden of Three. Or it could come from the words for ‘fortress’…or even the Proto-Celtic dūnom, which has even older roots and means to ‘come full circle’… which seems rather appropriate.

Given that the oldest known representations of the labyrinth are prehistoric… and so old that the story of Theseus and his encounter with the Minotaur was not yet a glimmer in the mind of the mythmakers… I think we can look as far back as we like for the origins of ‘Troy Town’s’ name.

The symbolism of the labyrinth must be etched deep in our collective psyche, though, as the Church ‘adopted’ the idea and many of the great churches have them as designs on their floors. Glastonbury, if you recall, has a ‘turf maze’ in the churchyard, as

well as a ‘finger maze’ in the Alms House by the chapel… and the ‘mother of them all’ curling around the Tor, its stations marked, perhaps, by dragons’ eggs…

The dog does not need to be let out. The door is open and the Ball is in play…