Unfortunately, today’s control seems to be rooted in finding the best entrée into the psychology of marketing and manipulation, forgetting that psyche originally referred to the soul, not the wallet or the popularity polls.

“Death’s at the bottom of everything…” a strange way of putting it, even if they do end up in the sewers. Although it would be true to say that death is the backdrop against which life is played out. Without it, would life hold any value for us? We dismiss the infinite all too readily in our society these days, while the tantalising glitter of transience catches our attention and becomes an object of desire.

The Hydra is an odd one. Not only do sources vary as to how many heads it had, but some also state that for each one cut off, two more would grow unless the stumps were seared with flame. Psychologically, that works too… if you count the symbolic flame as the cautery of experience. Especially when you consider that the Hydra was said to live in the lake of Lerna, which was both a gateway to the Underworld and a place of healing…

Equating the film’s sewers with the subconscious mind might give the wrong impression here… though undoubtedly both hold some dark and messy stuff. We have, as Dion pointed out in one of her books, forgotten that Cloacina was the goddess of sewers and her name meant “The Cleanser”. You can’t get rid of the muck without getting your symbolic hands dirty… 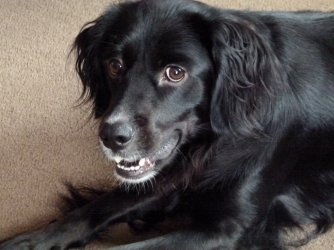 Or, in the case of the Black Beast, your paws.

Although why it was deemed necessary to walk through the stinky mud of the ditch rather than across the bridge, I do not know…

Unless it was to prove that dogs can go deep…

Even if it is only in mud.