I pulled into a field entrance, my eyes already glued to the hillside. We were still on the edges of Avebury; the site is not limited to the stone circle, after all, but stretches across a wide swathe of the Wiltshire landscape. On the crest of the hill odd features invited further exploration, but it was the sign for Hackpen Hill that had made me turn down the lane and from here we had a superb view of the White Horse…our third of the day.

We had left my home mid-morning and driven to Uffington, where the great, prehistoric carving some 374ft long occupies half a hilltop. We had passed the Marlborough Horse, carved by a schoolboy in 1804, its white chalk looking grey in the rain… and now we were looking at the 90ft figure of the Hackpen Horse that lies beside the Ridgeway. The origins of this horse are unknown, though it is thought to have been carved in 1838 by Henry Eatwell, a parish clerk of Broad Hinton to commemorate the coronation of Queen Victoria. Little else is known. Was there something here before?

Certainly the site itself has a longer history, with a couple of round barrows, a Bronze Age  cremation, a Saxon burial and traces of very early use. The Ridgeway itself has seen at least five thousand years of footsteps and many ancient monuments lie close to the track. Quite apart from the proximity of Avebury… Not that we really needed to know any of this at the time to guess at the antiquity of the area.. not when a superb standing stone was watching us from the hedgerow. My companion wandered over with his camera and snapped the best shot, though, while I was photographing the Horse.

We drove up to the Ridgeway and parked. The first thing we saw, other than the incredible view, was a distant monolith. Not too distant, perhaps… we could spare a few minutes, even if time was getting on. We followed the ancient highway between the hedgerows and wildflowers. Tall, dried stalks festooned with snails lined the way to a copse of trees that linked their roots to form a circular grove; a magical place where you could imagine the Fae might walk. A little way beyond that and we were into the fields in search of the stone. 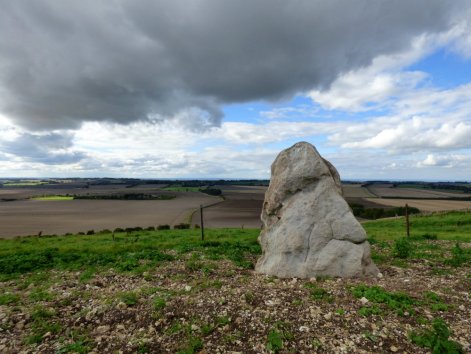 At first glance it looked like a hunched and hooded figure staring out across the vale… then a smiling face turned to greet us, then the half buried, hirsute head of an ancient sage…Whatever spirit the ancients had seen in it, to us it seemed merely glad of the company; the folorn majesty of a fogotten guardian. 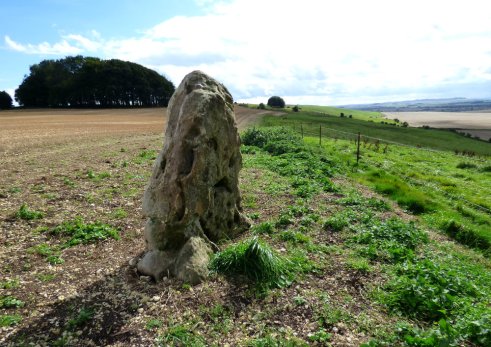 From every angle the faces and creatures in the stone seemed to shift and change. I have found no record of the stone… no mention of anything associated with it, though the Winterbourne Bassett circle is close by. If, as seems likely when you walk this landscape, all these sites were connected in some way, I cannot help thinking that this solitary stone would have had its place in the greater plan. Much like us.

We walked back to the car, our few minutes closer to an hour, with a renewed acknowledgement that we will really have to walk the Ridgeway one of these days. For now though, we needed to be on our way, passing the great hillfort that is Barbury Castle… another place we must visit.  Passing throught the old Templar lands close to Ogbourne St Andrew then back, quite unintentionally, through Marlborough towards Swindon.

As we were stuck in the rush-hour traffic, we had ample opportunity to look up at the isolated heights of Liddington Castle, one of the earliest hillforts in the country. It is so clearly seen from the roads around Swindon, yet I wonder how many look up and realise…or care… that this is one of the sites associated with the legendary Arthur’s Battle of Badon Hill. Yet another place hill we must climb and one that, apparently, is seldom visited as there is no car-park. 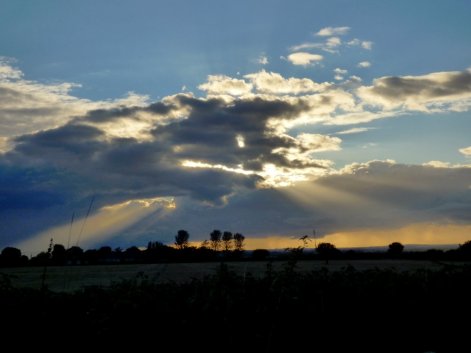 We took the motorway to get beyond the madness of Swindon, then back onto the roads less travelled, following the course of the old Roman Fosse Way for some time. As the light was beginning to fade we began to look for somewhere to stay for the night. The sunset was glorious and we pulled over to watch at least part of the daily spectacle of flame and light. 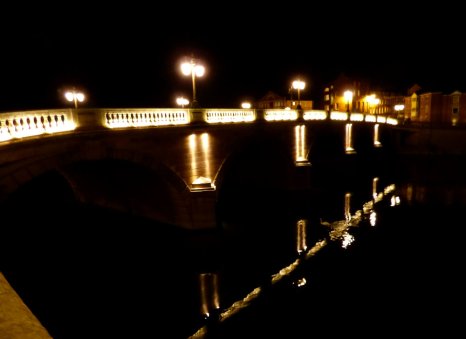 We were, by now, getting a bit desperate for a hotel; it had been a long, if fruitful, day. Dinner would be good too… yet we saw no sign of accommodation in an area best known for tourism and natural beauty. We headed into Worcester instead, a mere eighty miles from my home, though we had driven twice that. After battling with the one-way system, we finally managed to reach a place glimpsed near the river. A cuppa, a meal, a few minutes watching the lights on the water… then we called it a day. We wanted to get off early next morning… which was just as well, as Worcester has Roman and Saxon walls… and a cathedral… and a Norman church… and we had to be in the north so we didn’t have time. Not that we would be able to resist the odd stop along the way, of course. You never know what you will find… 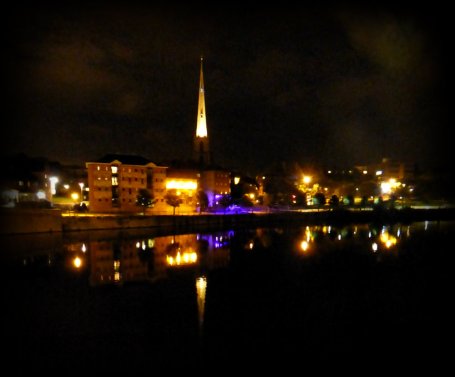