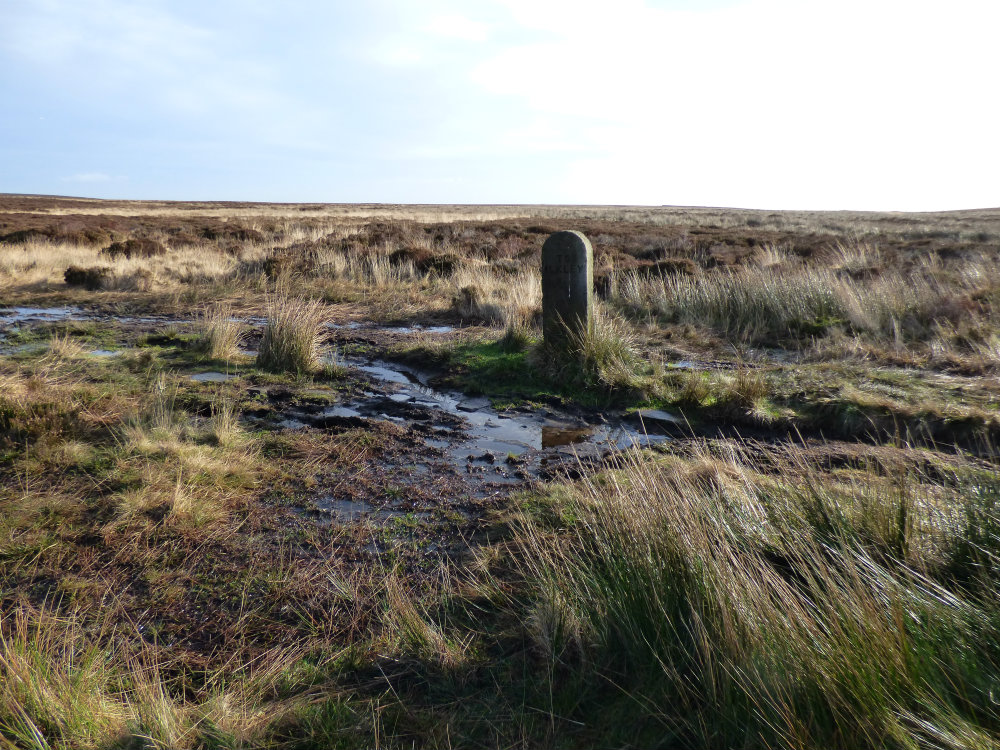 From Addingham we drove round the edge of the moor to Dick Hudson’s, a pub known as a starting point for walkers. A short climb and you are up on the moors. The day was clear and windy, perfect for walking… the trouble was, the weeks prior to our arrival have seen an awful lot of unseasonable and mild rain… and the peat is saturated.

We walked…or rather waded… through the stream that should have been the pathway, picking a laborious route from stone to tuft. Waterproof walking shoes are all very well, but when the water reaches your ankles, they aren’t going to stop the ingress. Even so… there were things we wanted to see… so we persevered. Even the grouse thought we were mad…

We left the main rivulet, following what appeared to be a perfectly serviceable track through the heather. Within a few yards it was starting to become clear that between the rain, the sphagnum moss and the peat, this was not the best idea at this time of year. Every few yards there were ankle-deep pools of russet water reflecting only sky and the ground squelched.

We were heading for an intriguing arrangement of stones out in the heather… great boulders that seemed, from this perspective, too evenly spaced not to investigate. We seemed to be making very slow progress, though we pressed on with determination.

When we  eventually hit a decent bit of track beside the grouse-shooting butts, we decided to call it a day. It was taking an age to get anywhere and, being the driver, I was conscious that risking a broken ankle wouldn’t be helpful. We turned and headed reluctantly back towards the edge of the moor. We could always come back…and with James to show us some of his special places perhaps too.

Disappointing…but at least we had spent a couple of hours amongst the stones and heather…and that, to me, was worth wet and muddied toes. I looked up as we neared the path for the last stretch, seeing the shadow of huge wings out of the corner of my eye… and saw the distinctive and unmistakable silhouette of a red kite, with it’s ‘v’-cut tail, sailing down to meet us! I have never seen kites on this moor before… large and distant birds that might have been kites, definitely buzzards, kestrels and a marsh harrier. Even an ibis (well, okay, it was probably a curlew, but as we were working on Egyptian mythology, it was close enough to Thoth…). I’d seen a kite as we had left the moors one day… but never up close on the moor itself!

We watched in awe and with our customary grins as it came in close, soaring and swirling with unseen currents in the air as it flew as if following some invisible path…as indeed, perhaps it was. A real joy…and one we would have missed had we not turned back. You just never know…

As we crossed the last stretch before the walled descent, we spotted another and smaller hawk… possibly a merlin, which would be just too appropriate given that we were talking about the workshop again…which has an Arthurian theme.

Moments later, a pair of red kites flew over…mere specks on the camera lens, but entirely present to our eyes… and that was a beautiful sight. Regaining the car, we turned our backs to the heather and began the long drive back to Sheffield with some reluctance…but for once, no tears. The kites have come to my moors.