While the workshop weekend was officially over, the adventure had only just begun. We said farewell to the Cumbrian contingent, who had a very long drive ahead of them, and the rest of us headed into Dorchester in search of lunch. The girls took us to a place we would otherwise have missed…Yalbury & Yvon’s… where we found the best elderflower cider and for which we owe the girls our heartfelt thanks. We were so impressed, we called back there a few days later and had a wonderful meal. But, between that first French toast and the final Raclette, there were many more adventures waiting for us.

But first, we had to get where we were going. We said our goodbyes to Helen and arranged to meet Larissa and Alethea the next morning, a hundred miles away, near Tavistock in Devon. Then, while the girls went to explore Maumbury Rings, we hit the road for the next leg of our journey.

These few days around workshops constitute our holidays. As both Stuart and I have regular jobs and limited leave, we have to make the most of wherever we are and we had been wanting to visit the West Country for a long time. I have fond memories of travelling there decades ago, but this would be Stuart’s first visit… and there was a lot that we wanted to see. My own trips had been largely ‘touristy’, and this was to be more of a research trip, visiting the ancient places that still grace the landscape.

We were particularly interested in the Michael Line, a ley or alignment marked by ancient sites, that crosses England from Land’s End, the most southwesterly point of the country, to Hopton on Sea in Norfolk on the east coast. There is much debate about the nature, purpose and even the existence of leys, with everyone holding their own opinion. Some see them as earth-energy lines, some as woolly-minded curiosities and others as remnants of ancient trackways.  My personal opinion is that if our ancestors were more in tune with the land than we are today, perhaps they did sense the earth-energies that doswers pick up with rod, twig or pendulum… and where better to place a trackway than where the earth leads your feet? 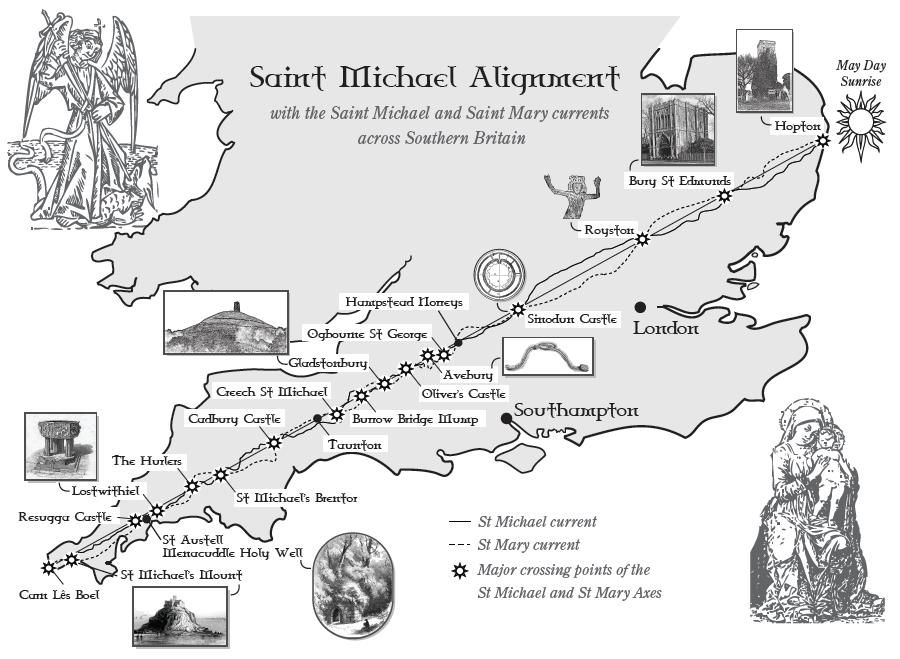 There are differing opinions of dowsing and dowsers too… but if the British Army can employ them, then regardless of the label of pseudoscience that has been firmly affixed to this and other similar practices, there is enough in it to warrant a bit of notice. The easiest way to convince the general public not to take notice of any phenomenon that falls outside of the realm of traditional science is to label it with one of the epithets that suggest that anyone believing in such ‘rubbish’ has lost the plot. ‘Conspiracy theory’, ‘pseudoscience’, ‘fringe’ (especially when prefixed with ‘lunatic’), ‘paranormal’ and ‘supernatural’…  profess a belief in any of these, and many people will look at you askance.

Me? I like proof. I like evidence. I’m a Virgo and it goes with the territory… if using astrology as an illustration doesn’t immediately label me as a ‘weirdo’. But, in the absence of proof, I keep an open mind. How do you define proof anyway? I was taught to dowse by my grandfather as a very small child, wandering around with rods made from a pair of bent wire coathangers. I know dowsing works… I have proved it to and for myself and there is a small pair of travelling rods tucked away in my handbag.

But orthodox science would not accept personal experience as proof. My problem with laboratory-based evidence is simply that you cannot prove or disprove anything if you don’t know what you are looking for or what to ask… and we are very far from knowing everything about this beautiful and mysterious planet we call home.

So… back to the Michael Line. Our plan was to visit some of the sites on the Michael line. St Michael, his earthly counterpart St George and their respective dragons having been major and recurring symbols in our own work over the years and anyway, we needed some way to choose which few sites we would aim for amongst the thousands we might visit in the area. We would have liked to be able to see some of the sites on the Mary line too… the feminine counterpart of the Michael line, that weaves its way along the ley. But there would not be time for that… or so we thought. So, off we went to Tavistock, choosing to take the old road across Dartmoor…