Unlike the day of our first trip to the Stride, the weather looked none too promising; it had rained solidly in the city. The journey back across the hills from the monthly meeting on the previous night had been accomplished at a crawl… thick fog had made driving very slow… and we were in no rush to go out to play the next morning. There were, however, one or two places we wanted to visit, starting with a pub that does a wicked line in sandwiches and chips, so it was almost lunchtime before we hit the road. Once through the bank of lingering fog, the weather cleared a little. We sat by the fire in the two hundred year old pub, warming our bones before heading out into the countryside. 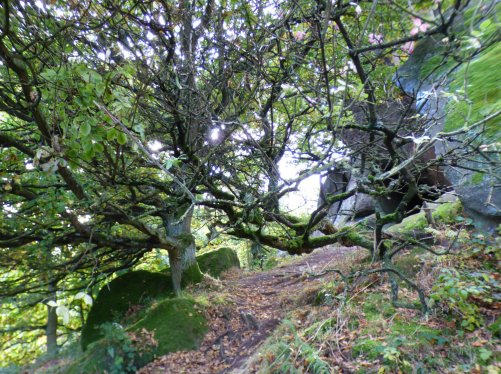 We had been out to the Stride before and failed to find the cave we were looking for before the light died. There had been too many things to see… though oddly enough, I didn’t get chance to write about them, though Stuart did so.  Where that first October day had allowed the ‘hobbit’ to wander around in a woollen shawl, January demanded more substantial clothing and better footwear.

On our first visit, we had come at the site from the other side; this time we were approaching from Dudwood, where a stone circle hides beneath the trees. It is not a true stone circle, but rather the remains of a hut circle that was part of an ancient settlement… one of many ancient sites in this small area of Derbyshire. It is the kind of place where you can stumble across strange things, including standing stones that have been pressed into service as gateposts by farmers over the centuries.

From whichever direction you approach, Robin Hood’s Stride looms above the road, looking, from a distance, like a castle guarded with gigantic Moai. It is easy to see why one of its other names is the ‘Mock Beggar’s Hall’.

The Stride gets its name from the legendary Robin Hood, who is said to have stepped from one pinnacle to another… a distance of some fifty feet. We have wondered about Robin for a long time… many of the landscape features and legends associated with him seem to paint him as a giant. While the ‘modern’ myths of Robin Hood describe ‘Little John’, whose alleged grave is at nearby Hathersage, as a seven-foot warrior, none seem to describe Robin himself in that manner. It makes you wonder… just how old are the real origins of that legend? And what exactly were they?

The earliest mention of ‘the rhymes of Robin Hood’ are in a poem from 1377. By the time such tales are formalised and written down, you can imagine that they have already been around for a long time. It is in the nature of such stories that what begins as a teaching tale… a myth, perhaps, explaining natural but mysterious phenomena or relating to the knowledge and skills needed for life… will eventually degenerate, losing much of their potency in favour of popularity. We will probably never know their true origins, but many of our traditional stories could be much older than we think. But then, our human presence in the area we were walking is also much older than the fields and pathways suggest. The more you look, the more the land begins to unfold its story…