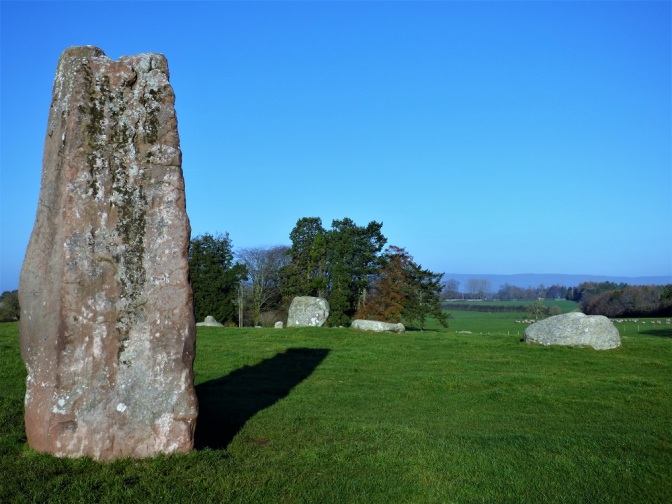 Long Meg and her shadow – The situation of Long Meg predates that of her Daughters because it is clear that her shadow path helped determine the construction points for their circle.

Between the years 3500 and 2500 BC it was possible to see Deneb, the central star of the constellation Cygnus (the Swan), and the Dark Rift, setting on the horizon from Long Meg…

The axis of the stone circle at Avebury, was aligned with the setting of Deneb in 2600 BC…

Wayland Smithy, constructed circa 3500 BC was also aligned with this star.

Local folk lore refers to Long Meg and her Daughters as a Meg Meldon, a local wise-woman, and her coven of witches who were turned to stone by the wizard Michael Scott because they danced on the Sabbath.

Scott allegedly put magic on the site by ensuring that it was impossible to gain an accurate count of the stones.

Over seventy stones were said to have comprised the circle before Lieutenant Colonel Samuel Lacy dynamited some of them in 1725.

Work on the destruction of the site, however, was halted when a storm of such intensity blew in that the labourers, tasked with the job, fled for their lives.

Lacy later turned his energies to reconstructing and preserving the site and was responsible for carving out the grotto of caves nearby on the River Eden, now known as Lacy’s Caves… 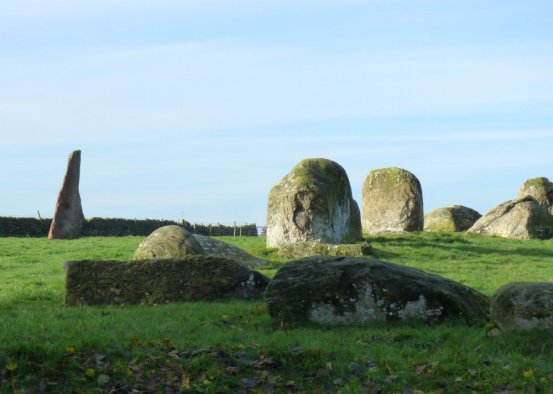 Folklore is another of those traditional arts which is apt to confuse the narrative following denizens of the modern world.

The trope of dancing humans turned to stones whose number is then unfathomable, is recounted at many a circle and, may point to nothing more, or less, than ancestral communion.

In this case the fact that two magical personages, one feminine and one masculine, are involved aligns with the observable fact that male and female energy lines cross in the centre of the circle.

Colonel Lacy’s involvement may point to the original locale for Long Meg herself. His caves being hewn from sandstone, the very fabric of the giant ‘gnomonic’ outlier. It is highly unlikely that dynamite was originally used!

The River Eden is one of the few in the world stretching north-south with its waters flowing north.

The ancient and aboriginal cultures believe that such rivers are sacred and reflect the Milky Way, seen by them as a road to the stars, because north flowing waters likewise take departed souls to the realm of the Great Spirit, the abode of the ancestors…

The Ancient Egyptians sailed their dead in boats to the after-life on the Nile, another north-south stretching river whose waters flow north!

After being given the gestural keys to Strength, and the Star, by the Magician, and the Hermit, our intrepid adventurers made their way to the caves to meet with Colonel Lacy…