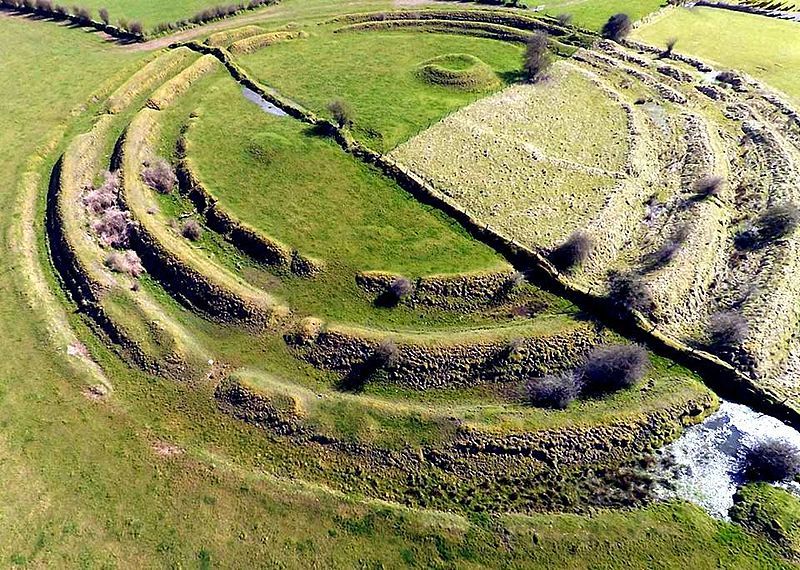 Weirdly, our next site came

And while there was no animal visible,

there were signs of its presence

liberally spread about the field.

As well as, more reassuringly,

‘The monument consists of a quadri-vallate earthwork,

meaning it has a series of three ditches

It is one of a very few such enclosures in Ireland,

and Tlachtga on the Hill of Ward in Co Meath.

These sites are thought to have been the burial places

Which does not actually tell us a great deal, really.

What the authorities are calling ‘quadri-vallate’

we might want to equate with our earlier revelation

in relation to the sidhe, that is, ‘being’, ‘threshold’ and ‘realm’…

‘peak of eagles’ which is also faintly visible

on the horizon of the previous picture.

We had just started to feel at home

when the bull made a re-appearance, herding his

cows and calves back into the field.

So, we made a collective dash for it!

Imploring the bull to eat

only one of our number

Death by goring and trampling

the much more likely scenario.

There is no peak here, though… Or is there…?

The great bovine culture of the Mediterranean,

by which we mean, the Minoans,

according to current timelines,

had its origins in a similar epoch?

I love the old stories, the legends and lays of ancient times when the world, from our vantage point, seemed both a more innocent and more magical place, where the impossible walked hand in hand with the improbable and where worlds seemed interwoven through the warp and weft of reality.

The tales tell of monsters and battles, quests and fair maidens, intrigue and magic. At least on one level. It is possible to hear in them still the crackle of the fire and the cadence of the bard holding spellbound an audience. Yet to listen to these stories in the silence of the heart is to realise how much they hold. In storytelling there is a perfect way to commit history to memory, to teach of new advances and preserve old lore, to guide the heart and mind through the hidden valleys of wisdom and show not only a way to live but a reason for life and the winding pathways we traverse.

On another level, the stories were simply stories… tales to while away the evenings round the hearth or fill the mead hall with sound. They were entertainment in much the same way as our society sits on its sofa watching fantasy and documentary on TV. We choose whether to be amused or informed. So did our forefathers, but perhaps it was the level of attention and engagement that changed, not the tale.

Read them now and they are still simply stories; tales to delight and transport us to another time and place. Look closer and the interactions of people seem to have changed only in the details, not in essence. Closer still and the veils part on a world of symbolism and meaning that goes beyond the daily life shared across the centuries. Close your eyes and you will smell the smoke of the fire and hear the voice of the bard…

in the gullet of the Black Salmon of the Lake of Light.

On the third night, he came to a river valley

whose edges were forested with tall trees.

From root to crown, one half of the trees

in that forest were aflame while the other

half were green with leaves.

There were level meadows on both sides of the

river and on one bank grazed a flock of black

sheep with on the other a flock of white sheep.

When a white sheep bleated a black sheep would cross

the river and turn white and when a black sheep bleated

a white sheep would cross the river and turn black…

Once upon a time we gathered around the flames of the hearth and listened to tales of long ago and far away. The stories grew in the telling, weaving ancient lore whose origins lie somewhere in a misty past with tales of high adventure, battles, magic and love. In Crucible of the Sun, this oral tradition is echoed in a unique and lyrical interpretation of tales from the Mabinogion, a collection of stories whose roots reach back into the depths of time, spanning the world and reflecting universal themes of myth and legend.

Available worldwide via Amazon, in paperback and Kindle.