There are some places that seem to have a timeless quality. As if, when you step within their atmosphere, you step beyond the constraints of place and time; you could be anywhere…and anywhen. This little stretch of moor is such a place. Patches of heather were still in full bloom, stones lie hidden in the bracken and reeds, quite appropriately, mark the path of underground streams. 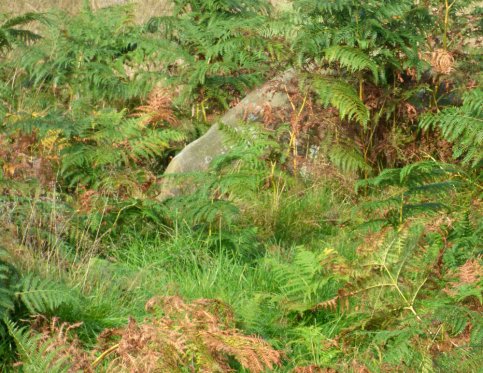 We had gathered for lunch on Baslow, just a few minutes’ drive away and taken a little time out to settle after the morning at Gardom’s. The afternoon would be spent amongst the cairns and circles of Barbrook. It is a strange place. At first glance… and if you stick to the wide track across the moor… there seems to be little to see. Yet this small area is rich in archaeology. Like most of the Derbyshire sites, the stones are small and little shows above the summer vegetation, unless you know where to look. But almost as soon as you step onto the moor, you begin to feel it.

We left the main track immediately; that had been put in place for modern access. We headed west, following a path we had found when the vegetation was lower by following the stones into the moor. Going that way also means that you complete the circle widdershins, rather than deosil… anti-clockwise, against the movement of the sun, rather than clockwise. To those of us who have studied and worked in the Western Mysteries or magical traditions, this really did ‘go against the grain’ at first, but we have found that at many of the older sites, this seems to be the natural way to move around them. As Helen said when this subject had been raised, perhaps the coming of Christianity and the subsequent demonisation of earlier pagan practices accounts for why moving widdershins has been associated with darker paths and bad luck. Another factor may be that the majority of the ancient sites we visit were built either for ritual or as part of the realm of the dead. Both would have been seen as gateways to the Otherworld that runs ‘at a tangent’ to our own… and perhaps that is why they require the opposite approach from sites pertaining to the lands of the living. Oddly enough, we still walk instinctively clockwise when we visit a church. It as if the site itself dictates the ritual of movement, if you listen.

As we walked, we pointed out the remains of the Swine Sty hut circles and settlement site, over on the opposite side of the little valley that is divided by Bar Brook. These were once the lands of the living, which often seem to be separated by running water from the ritual landscape, and yet it feels far less welcoming than the cairn field where we now walked. There are around eighty cairns on this side of the brook, making up part of a Bronze Age necropolis. Some are thought to be clearance cairns, some are burial sites and, when the bracken is low, they can be clearly seen. Some have been robbed over the centuries, either for stone or from curiosity and their internal structure and the cysts they contain can be clearly seen. Most have never been legally excavated and the whole area is now a designated Scheduled Ancient Monument.

The first major structure we came to was the large cairn behind the stone circle that would be our last stop of the afternoon. This particular cairn was excavated and reconstructed around fifty years ago, the structure having been much disturbed in previous centuries by the amateur antiquarians who were the precursors of our modern archaeologists. Four carved stones were found there and removed to Sheffield’s museum. Cremated bones and pottery sherds from a collared urn were also found, along with an urn with the cremated remains of a child. So many unanswered questions in this one cairn! And with so many cairns, where so many of our ancestors were once laid to rest how many stories could this land whisper? It was perhaps a fitting start to our journey across a moor that holds at least four thousand years of human history, walking between the heather-covered cairns towards a very strange stone circle…