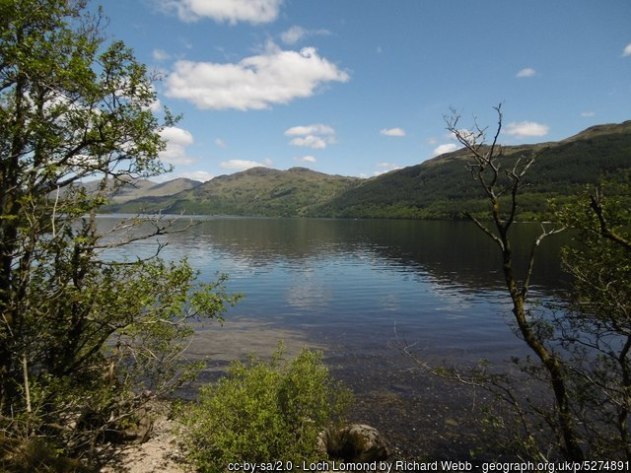 It was already midnight as we drove along the shores of Loch Lomond. The black, shimmering banks seemed far less than ‘bonny’ as the water lapped at the kerb, the rain blurring the lines between the loch and the road that runs right along its edge. The roads and visibility were terrible… we hadn’t stopped for hours… and seeing a lay-by at the water’s edge, the decision was made to pull in and get some sleep. So much for the hotel that had been paid for… and any plans we had for recharging our own and our technology’s batteries.

Oddly enough, when I looked up our route on Google Maps later, I found we had given in and parked just below Lochan Uiane, the Fairy Loch, a sacred spring so named because in certain lights geometrical shapes in blue and green appear in the water. Science attributes this magical rainbow effect to minerals, but legends say that the little folk are responsible. The old tales say that when a wish was made and a fleece left overnight, the fairies would dye it to the desired colour. So, instead of stones, we slept with rainbows and fairies… our third unplanned night in the car, all within the sphere of sacred sites.

We woke four hours later at first light and my priority was to find a restroom and a coffee… it had been a long, long time since the ferry… A few miles down the road we found a small town with a twenty-four-hour MacDonald’s. Not ideal… but as long as I could use the washroom and get coffee, I’d have raided Hell itself. I might as well have done so… the doors were locked and the staff unheeding. The air was blue with unladylike language as I drove away.

By this time we were very tired, on edge… and I swore when the sky-gods, with seeming irony, decided to shower us with rainbows. We stopped, hours later and with gratitude, in Sanquhar, but didn’t find anywhere for coffee. We were not, at that point, all that far from Dumfries, where we were going to get the ruddy tyre changed, come hell or high water… and whether they could find anything wrong with it this time or not. It was still early when Stuart called a halt once more and I pulled into a tree-lined layby. We had a bite to eat, appreciating the green tranquillity of the trees… and I was asleep in minutes.

I am told that I awoke, briefly, an hour later when Stuart surfaced. Apparently, after one look at my squished face, he told me to go back to sleep. Another hour passed before I finally woke, to find the layby spotless. All the overflowed and discarded trash had been picked up and binned by Stuart as a thank you for the sanctuary the sheltering trees had offered… and a posse of jackdaws were strutting around.

“Three nights in the tomb…” We were completely refreshed after this stop. Good humour was restored and we were eager to get the tyre sorted so we could risk faster roads home.

Later, once we were home, I would look up that layby… and find that we had slept, once more, just minutes away from a stone circle. The Twelve Apostles… a name we know well from its counterpart at Ilkley… is the largest stone circle in Scotland and one of the largest on mainland Britain. It is aligned with the midwinter sunset, and local legend says the twelve stones were erected by the Apostles themselves, with one being removed for Judas Iscariot. The legend is wildly inaccurate, as the circle is a few thousand years older than the Christian story. Three miles beyond the Apostles is yet another stone circle, Easthill, and, on top of that, we were in Merlin country too… with legends of Myrddin Wylt running hand in hand with history.

With dead phones and no way of contacting Mary, all we saw of Dumfries was the tyre place. We did not detour for Cairn Holy as we had originally planned… we could save that for our next trip north when we will hook up with Mary. We didn’t even stop to revisit the magnificent Ruthwell Cross… we just headed for the motorway, heading south… and expecting our adventures to be over. You never know how wrong you can be…