After my walk along the bay to the kirk of St Bridget the rest of the day passed in leisurely fashion, surrounded by the colours of the garden, with wonderful food, cold Prosecco and warm friendship. The evening began under the auspices of an eye-opening Edinburgh spiced orange gin, continued with more good food and ended, feet up and wine in hand, with a documentary about the construction of the Kelpies… which was our destination for Thursday. 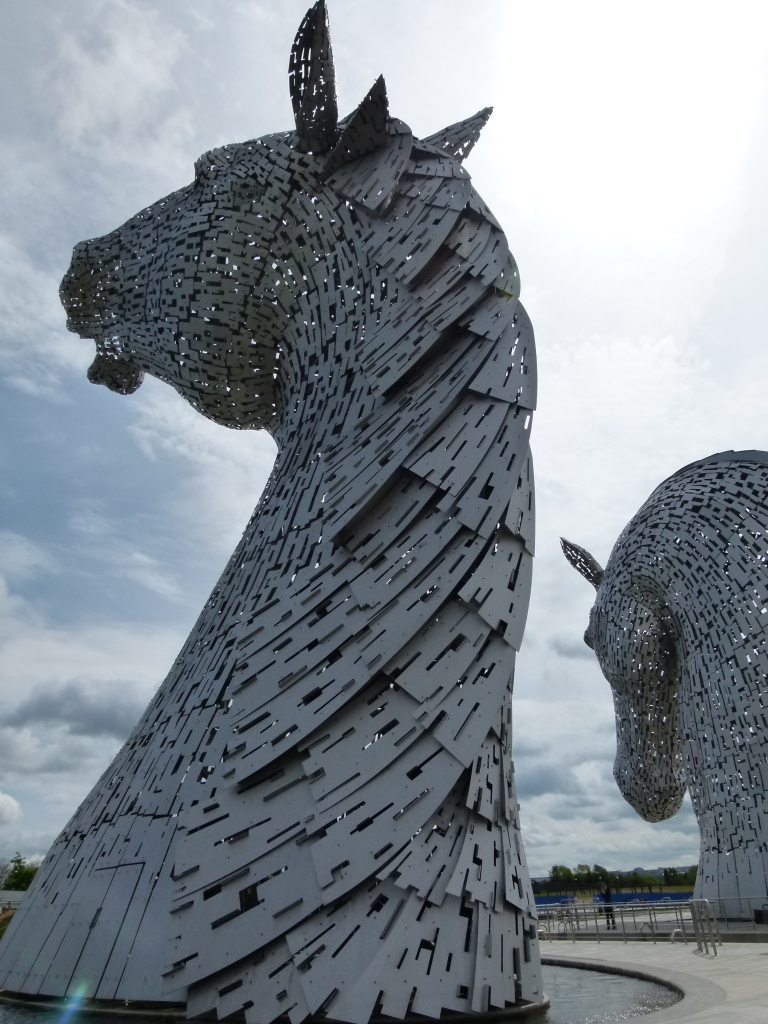 We needed to be fortified for the trip, of course, and were whisked away in search of breakfast by our hostess to a restaurant in a garden centre. Now, quite how I have managed it, I don’t know, but American pancakes with maple syrup had never come my way. The addition of crispy bacon to this mix gave me some cause for concern and I was a tad dubious. The waitress rolled her eyes and shared a pitying glance with my companions. I was very quickly a convert. I had already eaten more on this trip than I eat in a month as a rule… but what the hell, live now, diet later, I thought, demolishing the third pancake.

Just as well I adopted that philosophy…. 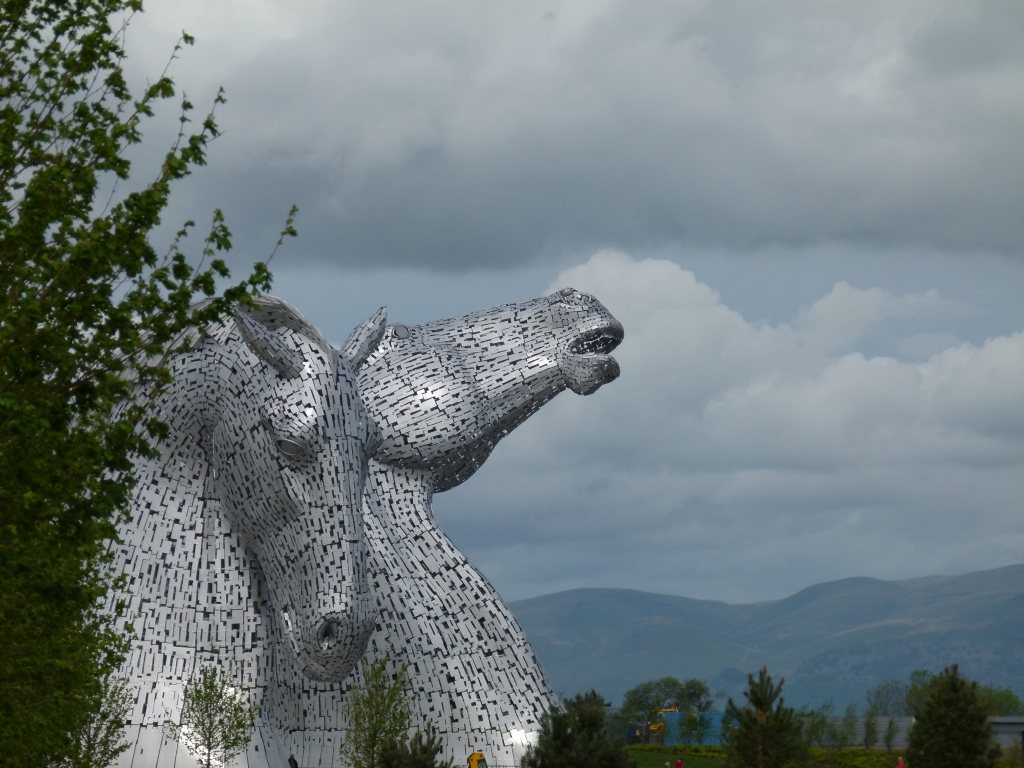 We drove out to Falkirk under a steely sky, and I nodded off in the back seat, replete, waking only when ‘Kelpie alert’ was sounded by the two in the front. Opening my eyes I caught a glimpse in the distance and grabbed the camera. They are utterly spectacular.

Now I have seen Andy Scott’s work before, notably his Equus Altus, a five-metre high horse carrying a woolpack, and the Briggate Minerva, with her owl which is the city’s symbol, in my hometown of Leeds. I recognised his unmistakable style immediately. But the Kelpies are something else. They stand by the canal in Falkirk, a bridge of locks between them, reflecting the sky, changing with each shift in the light, into the pool below.

They stand some 30 metres high… about 150 ft… and they are beautiful. The curve and musculature of the neck of the heavy Clydesdale horses used to tow the barges once upon a time are graceful and proud. They are, quite simply, spectacular. At night they are lit with colour, and there are plenty of images online to see, but in the daylight, they are simply themselves and I think I prefer them that way, showing the skill and vision of the Scottish artist who created them. 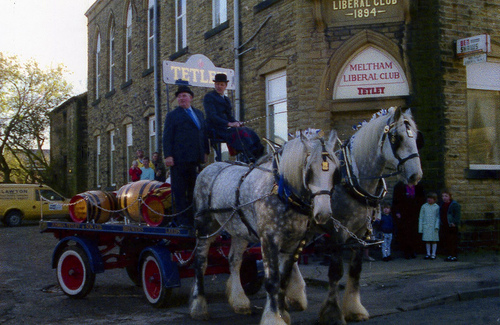 Mind you, they were made in Yorkshire…. So I feel I have a bit of a personal affinity with them. On more than one count. I remember the Tetley’s brewery drays, pulled by the huge Shire horses that delivered the beer around the city right up until 2006. They were a glorious sight, always beautifully turned out and I doubt I am the only one to have regretted their inevitable departure from our busy roads. Nowadays even the brewery is gone.

Later that afternoon we were treated to afternoon tea at a local garden centre, followed by a talk on plants. Proper afternoon tea. Which, for the uninitiated, contains enough calories to sink a small battleship. It consisted of fabulous sandwiches, jam and cream scones, strawberry tarts covered in a pyramid of whipped cream, meringues (sandwiched with same) and a variety of other cakes and biscuits. With proper tea, of course. Utter decadence… but utterly delicious! 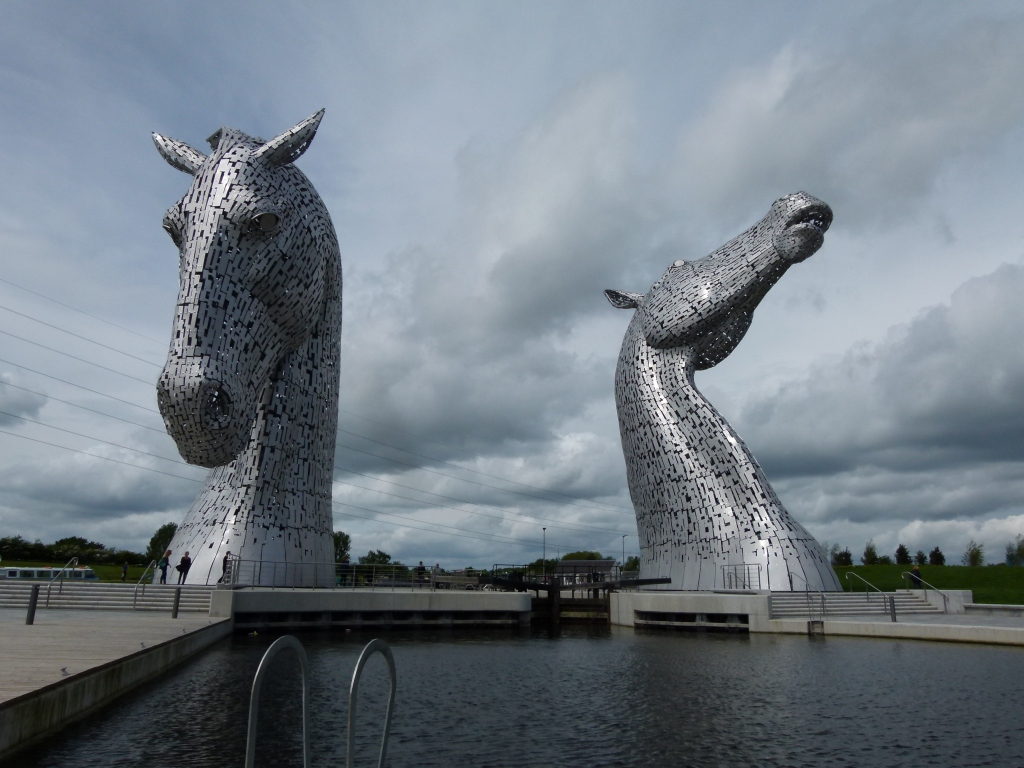 After that we had very little choice but to retire to the garden until dinner… a ‘small’ collation fit for a king. The Scottish notion of hospitality is very serious, and delightful. We were spoiled. Which probably explains why I fell asleep mid-evening. They sent me to bed… after all, two of us had a long drive south the next morning and an early start.