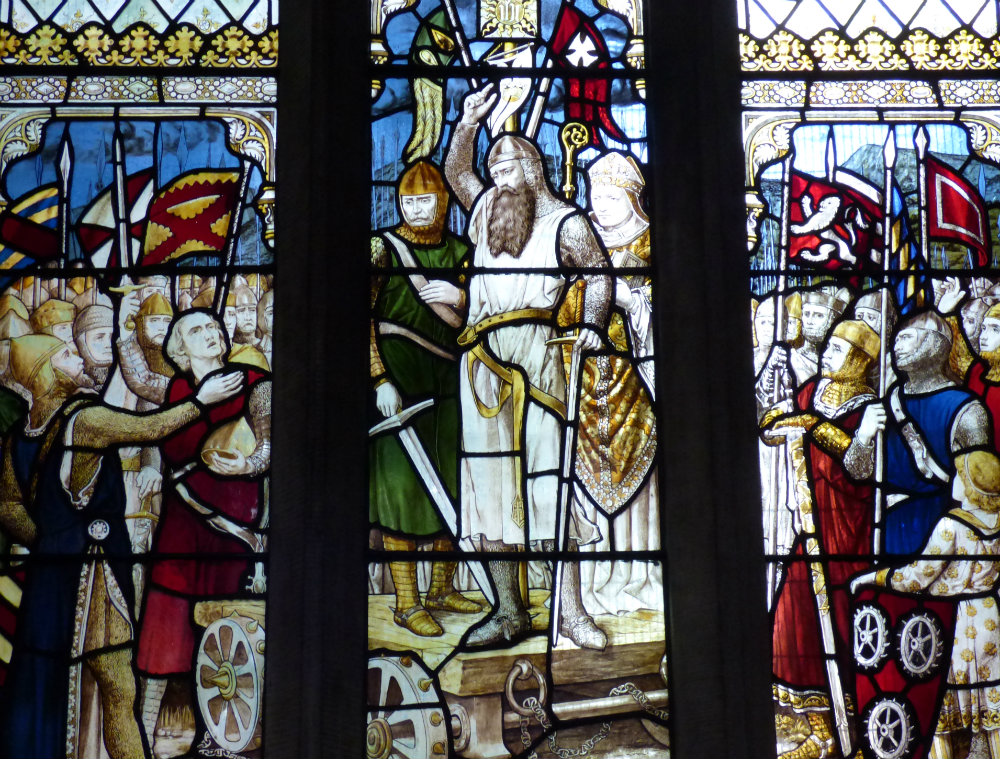 He was right, I couldn’t believe it… the door opened to reveal a painted church. The walls of the north aisle of All Saints church in Helmsley are completely covered in painted scenes and pierced by stained glass. The sight took us back centuries, to when the stories of the saints and the Bible would be illustrated on the walls for the unlettered to see and understand…

It took only a few moments to realise that these, however, were somewhat more recent than the 15thC paintings that still cover the walls of the church in Pickering, just a few miles away. Even so… a painted church is a rarity and gives a unique glimpse into ecclesiastical art. You have to wonder if they had been painted to echo those of Pickering, perhaps. The scenes here, we found, were the work of a London artist named Gast, commissioned to his own design by Vicar Gray and completed in 1909. Architect Temple Moore designed the painted ceiling, reredos and the altar by Thomas Mouseman whose work in wood always shows his trademark caved mouse…

The paintings of the north aisle show a none-too-accurate timeline… a kind of family tree… of Christianity in the area, while the windows tell the story of the founding of nearby Rievaulx Abbey. They are not the only wall paintings though… St Columba’s chapel in the south transept is also painted with scenes that show how Christianity came to the area, as well as the eternal struggle between good and evil… including an enormous dragon being confronted by an armed knight on horseback. 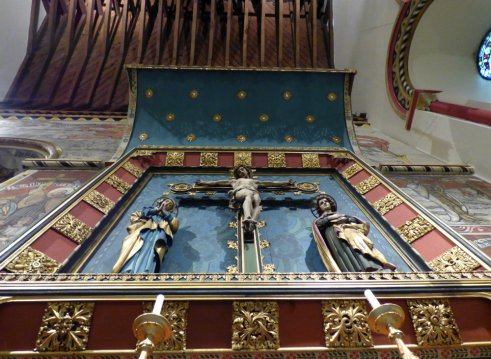 Also in St Columba’s chapel is a fabulous window telling the saint’s story and an imposing reredos from Oberammergau in Bavaria. There is also a copy of a fascinating painting of Veronica’s Handkerchief by Gabriel Max. The eyes, cleverly painted, seem to flicker open or to close as you look. It is a curious thing… almost as strange as the tale of the relic itself, said to be imprinted with the true image (vera ikon) of the face of Jesus, after his face was wiped with the handkerchief on the way to the Cross.

There is so much to see in this church that it is easy to forget the church building itself. There has been a church recorded on the site since 1086 when it was mentioned in the Domesday Book, though there may well have been a church here much earlier. Most of what now stands is indeed the Gothic Revival restoration we had posited from the outside, though 12thC stonework remains in the base of the tower and the hogback in the porch dates back even further to the 10thC.

The great chancel arch, however, is something special, larger than most in this part of the world and with the distinctive mouldings of the Norman 12thC. An ornate 15thC piscina hides in the shadows and a brass memorial to a knight and his lady of the same era lies in the baptistery at the base of the tower.

The font is a modern one; the 13thC font was moved in 1868 to the church of St John the Baptist in Pockley. Many of the original features of the building were lost at this time when the Earl of Feversham funded rebuilding works. What now remains seems to follow a skein of faith back through the ages from the time when the church itself would have been very much part of the community, even being used as a marketplace. 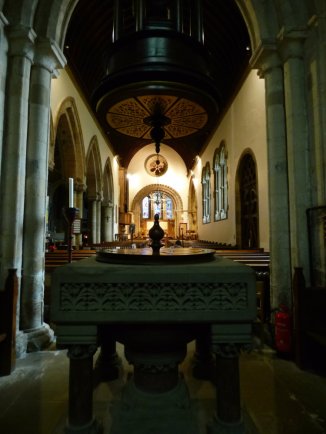 Behind the font is a sad relic of a cruel and utterly shameful practice that is a conveniently forgotten part of our history. Mounted on the wall is a slave yoke, a forked wooden stick used to tie captives together and control them as they were marched into slavery. The fork was locked around a captive’s neck with an iron bar to hold it in place. The other end would be tied to another yoke, and family members might be tied to the yoke with rope to prevent the men from escaping, making it both cheap and simple for a few guards to control large numbers of slaves. Slavery had existed in many forms since before the Roman occupation of Britain, but between the 16thC and 1807, it is thought around 12.5 million people were transported as slaves. It was not to end until the Slavery Abolition Act of 1833 formally freed 800,000 Africans who were then the legal property of Britain’s 46,000 slave owners. What is seldom mentioned is that the their owners were also formally compensated for the loss of their ‘property’ to the tune of £20m… around £17 billion in today’s terms. The slaves, now free, were then required to work a 45 hour week for their former masters, free of pay, for a further four years… effectively covering the costs of their own freedom. Many slave owners were not rich plantation owners, but tradesmen and -women, middle class households… even country vicars. It seems not out of place to see this relic of an appalling practice preserved in the quiet beauty of an English church.

… PC 963 Kraas saw the figure first and instinctively backed away from it, principally because it was there and unexpected but also because it was tall and hooded, and its face could not be seen.