We left Chester in search of lunch… oh yes, that had only been the morning, but what a morning! A wonderful start to our research trip and in perfect weather too, which was a bit of a relief. I should probably clarify a bit. I had gone north originally on School business, of course, though the trip itself counts as a holiday for me. We were planning to get up to Scotland to research some sites for our books… it doesn’t matter if either of us visit them alone, we need to do it together in order for a place to make the books, even if one of us already knows a site well.

We were, weather permitting, heading, via one friend close to Edinburgh, for a little place north of Aberdeen to see another. His home is on the north east coast of Scotland… and we, having left the east behind, were now on the western seaboard of England, right next to the Welsh border. Makes perfect sense. 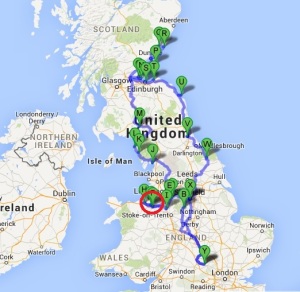 Research trip or not, playing out in the landscape always counts as a holiday, even when it is only for a few hours, so the prospect of whole days of it ahead was just wonderful. It was, I realised, over thirty years since I had been able to take this length of time out, with no-one who needed me to do anything except look, learn and enjoy the landscape and the adventure. And drive, of course… though that, in itself, is a pleasure for me.

Other than Chester as a starting point and our friends as a goal we had made few plans. There were a few places we thought we might like to visit, but there was no set route or itinerary to follow and we had booked no rooms… we were taking the time on trust and seeing where it… and the weather…led us. Research for previous books had already taught us a lot and snippets of reference and information lurk in the dark corners of the mind, waiting for their chance to peek out and wave. We would simply see what happened and where the adventure unfolded.

We both had places to share and The Greyhound in Saughall was one of those… and a pub where we could potentially have lunch. We were going to start with merely a little liquid refreshment, though, before a gentle stroll through the quagmire of the fields. “We haven’t seen any hawks yet…” said my companion as we waited for the pub to open. We are sort of used to their presence and miss them when they are not around. We needn’t have worried, though; as we looked up to see what would be the first of many fly over, right on cue, harried by a crow and a seagull.

Donning our boots we tramped across the fields through a mixture of mud and ice. Most of the ground was frozen still. Sunshine or not, it was January after all. The path led down then uphill, through woodlands where the hazel catkins and the newborn leaves of celandines herald spring, beyond a bend in the river where we met a very curious robin until we reached a stream where the trees seems to be cuddling up for warmth.

Crossing the water we emerged into sunlit fields where my companion turned and grinned… that look that tells me he has something to show me. Sure enough the unmistakeable signs of earthwork mounds undulated before me. It is almost impossible to tell with the eye alone what age these places may be. The Neolithic mounds and the Norman motte and baileys look very similar, and the problem is further compounded by the fact that many older mounds were later adopted and adapted to strategic use, due to their position in the landscape or their importance to its people.

This one is known as Shotwick Castle and was once a Norman garrison, built by none other than Hugh Lupus, Earl of Chester, known as the Wolf. It was he who had in 1093AD built both this castle, to control the crossing of the River Dee, and begun the construction of St Werburgh’s Abbey… now Chester Cathedral where we had spent the morning. We didn’t know it then, but he had also endowed the Abbey at Whitby, where we would find ourselves some time later on the trip.

Nothing now remains of the castle save the mounds and the moat and vague echoes in the landscape. The place has not been formally excavated to date, though a private dig in 1876 uncovered a spur, some pottery and fragments of antlers. Looking at the landscape we had to wonder what had stood here before. It has the feel of a more ancient site, even in the bright winter sunlight. The echoes of childish laughter still haunt the stream and I feel there is more to know about this place.

It was here that the camera battery gave up the ghost, exhausted, no doubt, from the morning in Chester. Thinking I could always borrow the battery from the other camera I was not too disappointed… though that too had died. We headed back to the Greyhound for lunch, frantically trying to charge the thing in a handy socket, to little avail. Which was a pity, as we had decided that our next stop would be in Wales…