I was looking forward to Nevern Church… another one of those, like Kilpeck, that we would visit ‘one day’… and were visiting at last. To think that we had seen so much since Kilpeck, just three days before, seems incredible. But that’s the way these trips seem to work… time takes time off to stretch for a while, leaving us space to play. The trouble with some of these places, though, is that you come across them in researching other places and forget what it is that you actually wanted to see. All I could recall was that Nevern was home to the Bleeding Yew and was, in fact, renowned for its avenue of ancient yew trees, some of them over seven hundred years old. Just like Kilpeck, though, we found far more than we imagined.

The Bleeding Yew is not an uncommon gardening phenomenon, but few have a place in legend or are credited with being miraculous. This one is said to exude the viscous, blood-red liquid because a monk was hung there for a crime of which he was innocent. Or because the Cross on which Jesus was crucified was a yew and the tree bled in sympathy. Or because it weeps until a Welsh king sits once more on the throne. Kings may have something to do with the story indeed; according to a theory expounded by Martin Porter at The Greenman, King Vortigern himself may have found his final resting place at Nevern when he fled from the Saxons in defeat. Whatever the true reason, it is a strange sight.

Vortigern takes us right back to the days when this church was first built and back to the days of King Arthur. The Arthurian legends that we all know and love are mainly drawn from later, romanticised retellings, but there are so many ancient sites and snippets of folklore that associate Arthur with Wales, as well as the later stories that ‘the once and future king’ may well have originated there. He is certainly associated with Nevern in folklore. Not only as some say that it was at Nevern that he met his end, but there is a Pilgrim’s Cross cut into the stone of what seems to be a bricked-up cave halfway up the hill to the remains of the castle… a site we would have no time on this trip to visit… and one legend has it that Arthur hid the Grail in this cave. Another, more Christianised version, is that the Knights Templar hid the Cross of the Crucifixion in the cave, the proximity of which might explain why the yew bleeds…. or at least why the legend arose. The timing would be about right for the yew, if it is over seven hundred years old, as the Templars were forcibly eradicated in 1312.

Behind the miraculous yew, I found a touching tribute to a late loved one on a grave. Left there many years ago, protected first by glass cloches, then covered with wire frames to prevent breakage, wreaths of delicate stone roses still rest on a tomb. It was when I looked up from the grave that I saw it, framed beneath the curve of a branch, and one of those expletives you really shouldn’t use on holy ground escaped my lips. Not that you could have missed it… not when it stands thirteen foot high and as fresh as the proverbial daisy beside the church…

The Nevern Cross… that was why I had wanted to come… not just for the yews. Wasn’t it? It was well worth the trip, just on its own. The Celtic Cross is over a thousand years old. Made of the local dolerite stone, it is carved in two pieces, with the cross head held in place with a mortice and tenon joint worked in stone. The sides are covered with the classic intertwined designs, crosses and swastikas… an ancient symbol of light… and there is a Latin inscription. On one side is written H/AN/.EH… the meaning of which seems lost. On the other DMS, which may be an abbreviation for the Latin word Dominus, meaning ‘lord’.

It is an incredible survival, the carvings still sharp and clear in spite of a millennium of weathering. What is less clear is the meaning of the knotwork and symbolism that adorns it. That the designs of the knotwork incorporate more than just beauty, there can be little doubt. At least part of it is a symbolic ‘language’ that would have been familiar to those who made it. Some symbols, like the swastika and the triquetra, the three-pointed designs that indicate the Trinity, we can at least partly understand, but much is now lost to us of these visual teachings. 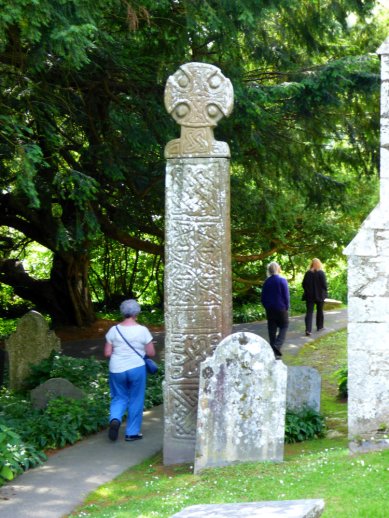 Local folklore tells of how the villagers would gather at the stone on St Brynach’s feast day on April 7th, to wait for the first cuckoo to perch on the stone and bring with it the spring. To me that smacks of an older story and I thought of the Hunting of the Wren, wondering how that might tie in with the story. We marvelled at the cross and wandered around the churchyard that is filled with wildflowers, butterflies and interesting monuments before heading back towards the church to go inside. Then we saw it, and I remembered exactly why I’d wanted to come to Nevern… the Vitialanus stone.

The Vitialanus Stone is where Vortigern comes into the tale as the theory goes that this might be his tombstone. Not that we knew that at the time, that came with the research later. What we did know was that this was older by far than the Nevern Cross… dating from around AD500 and a very early Christian artefact… if indeed it was ever Christian at all. Catching Stuart’s eye, I knew just what was going through his mind and sure enough, the outwardly irreverent, though accurate descriptive we use for these obviously phallic stones was the first thing he said. There is nothing to tie this stone to the religion of the Church, just an inscription in Latin that reads ‘VITALIANI EMERETO’, variously translated as ‘to the honour of Vitalianus’ or ‘the monument of Vitalianus’. But that wasn’t the really exciting part. The best bit was that along one edge of the five foot stone, Vitalianus’ name is carved in Ogham script.

Ogham is written by making short, but precisely written lines along the edge of stone or wood. The position determines the letters. One legend tells that it was the mythical Scythian King, Fenius Farsa, who invented Ogham, shortly after the fall of the Tower of Babel. He journeyed with 72 scholars to the plains of Shinar to study the confusion of languages, but they had already dispersed. Remaining there himself, he sent his scholars to find the languages and collated them himself into a perfect script, naming the twenty-five letters after his scholars. A symbolic story if ever there was one, especially as Amraphael, king of Shinar, was one of those to whom Melchizedek, the priest of the Most High, served bread and wine. Another tale says it was Ogma mac Elathan (Ogmios), a master of poetry and speech, who created the script, intending it only for the bardic elite. The first message was a magical warning written on a beech tree, and the letters thus all bore the names of the trees. Either story will do for me as both have meaning. 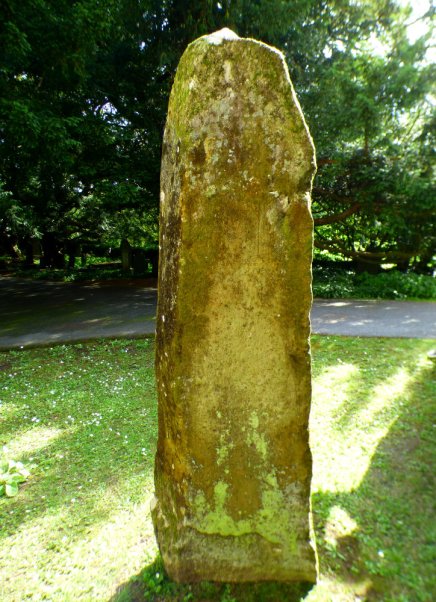 It was an incredible find… there is something very moving in seeing the script of our distant forefathers, knowing what was written, though not why… it brings them close and makes the encounter personal, erasing the centuries and affirming the connection across time. Nevern has been well worth a visit… and that was before we even crossed the threshold of the little church! 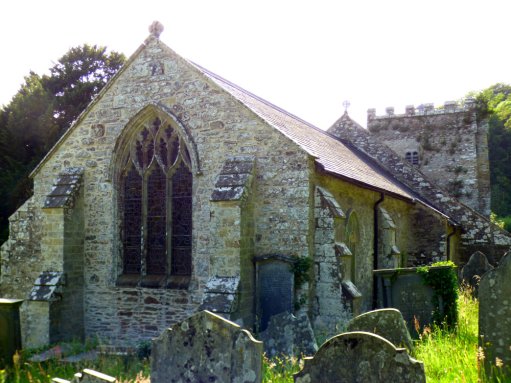