We had watched a gentle rainfall silently, sheltered by a large umbrella in the pub garden, delighting in the silver drops illuminated by a solitary light. By morning, however, it was clear that it had rained in earnest overnight. Fortified with a magnificent traditional English breakfast we hit the road only to find it flooded and muddied. No matter… we were on a mission and above the mists, the sun was making a shy appearance in the heavens, flirting with us from behind the clouds.

All we had on the agenda for the day were two hills and a Roman road… we had all day, a map and should, we thought, be able to get the research done in no time. It never ever works like that. 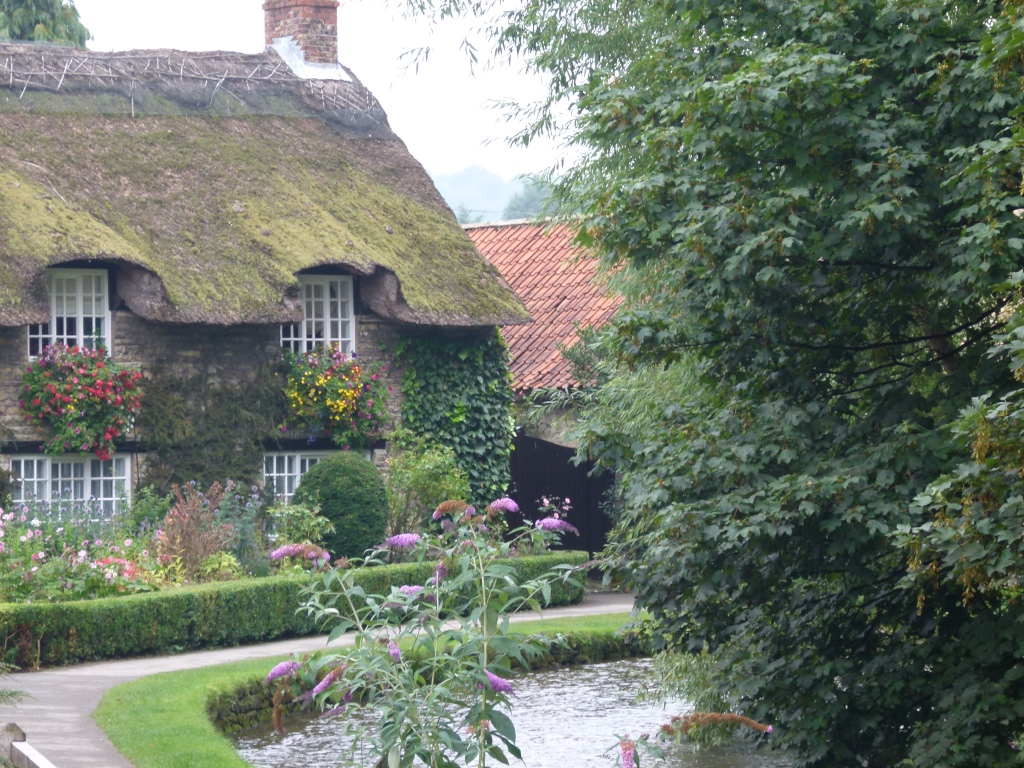 We began with a return visit to the local castle site and the tiny church. The view across the valley was spectacular and the traces of occupation… the placement of the walls, the fishpond… were far easier to trace in the morning light.  The simple church held some fabulous and unusual stained glass windows and we lingered a while, discussing the symbolism. Ancient yews flanked the gates, dotted with blood-red berries and animated with birdsong. 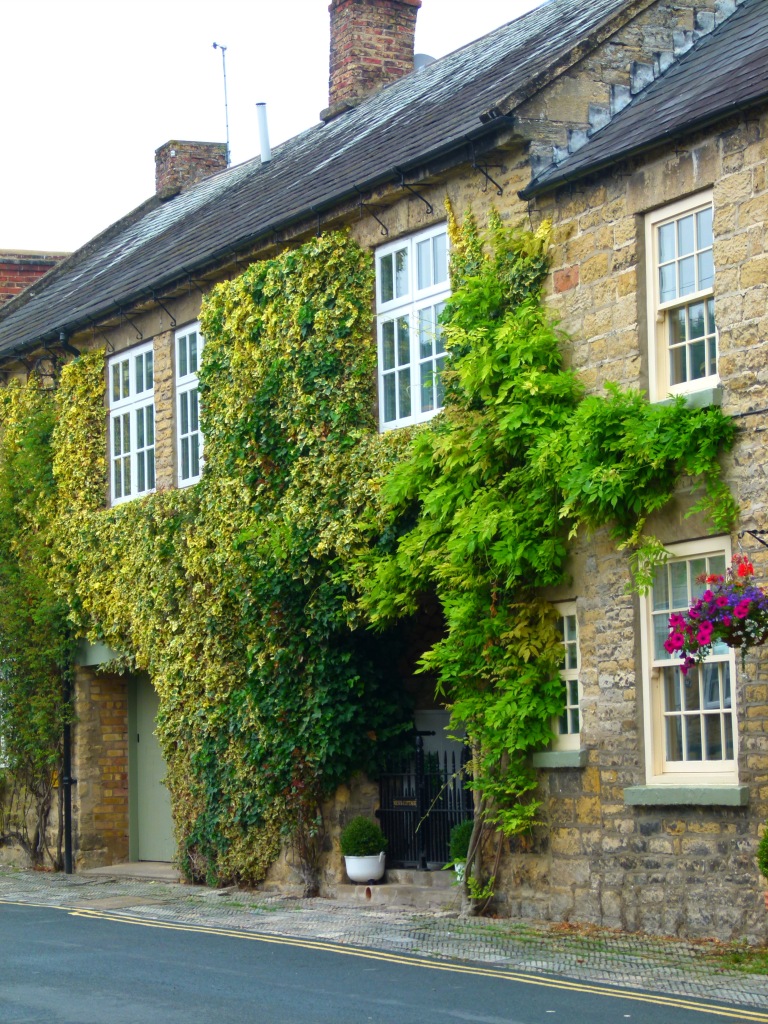 After a couple of false starts up farm tracks, we decided to go the long way round to our first destination. The road took us through the pretty villages around Pickering and we were soon passing through Thornton-le-Dale. The village ‘cross’ caught our eye, as did the strange and wonderful effigies dotted around the beautiful little town. It was, however, the church that caused us to park the car some distance away from the centre and walk back. 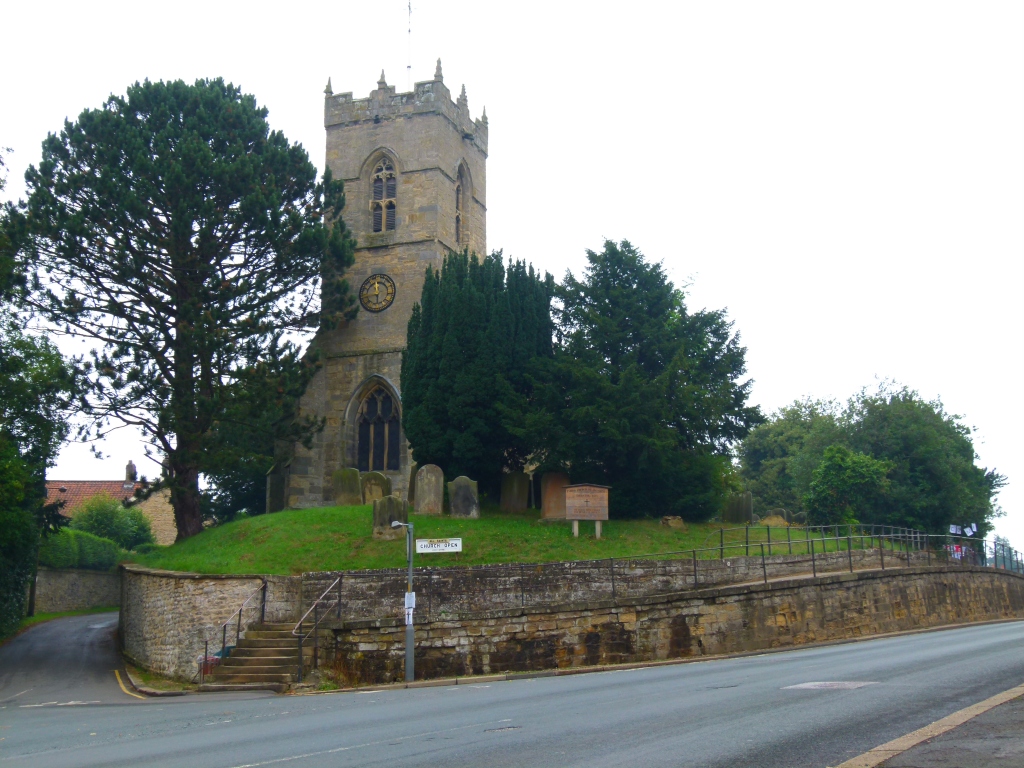 Set in a raised enclosure the church was obviously ancient and needed to be visited. It was well worth it too, with superb windows, alabaster knights and a beautiful reredos of the Annunciation in the side chapel. The windows alone have sparked a deep debate and a mound of research. Of course, there was, most unusually, a wonderful selection of history books on sale… lethal ….and time consuming… 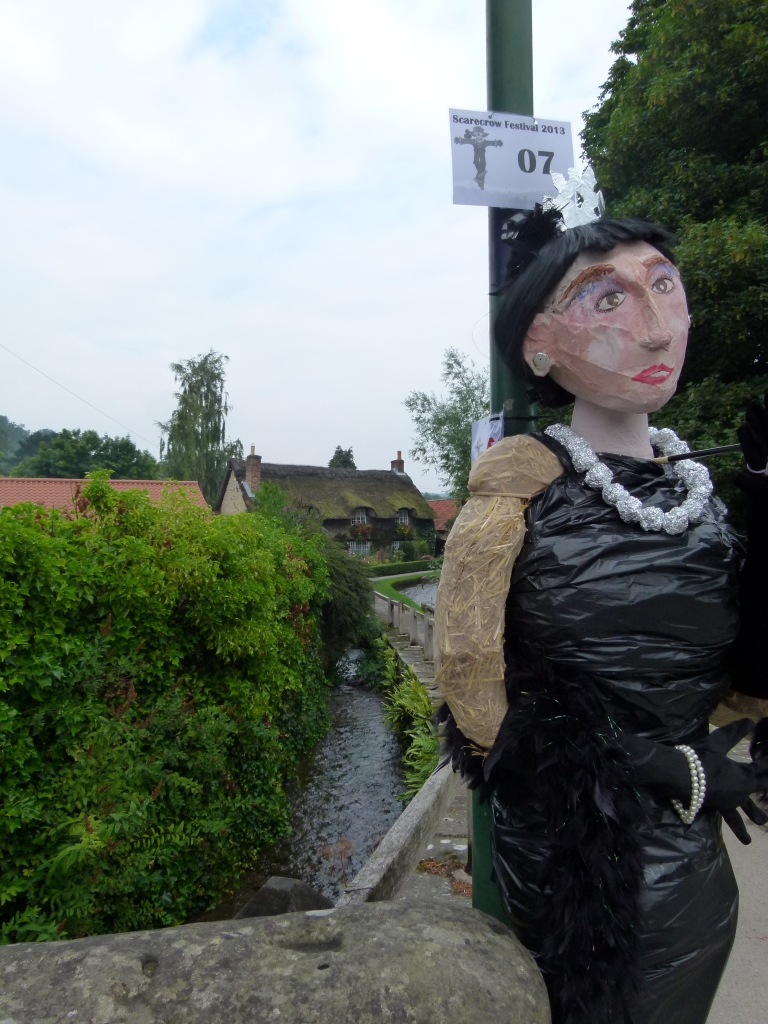 The little town was a delight. Bustling with tourists too as there was a scarecrow festival in full swing. Dotted in odd corners, sitting on the steps of the village cross, even in the sparkling river… And not just any scarecrows, mind you…these were quirky, fun and colourful… 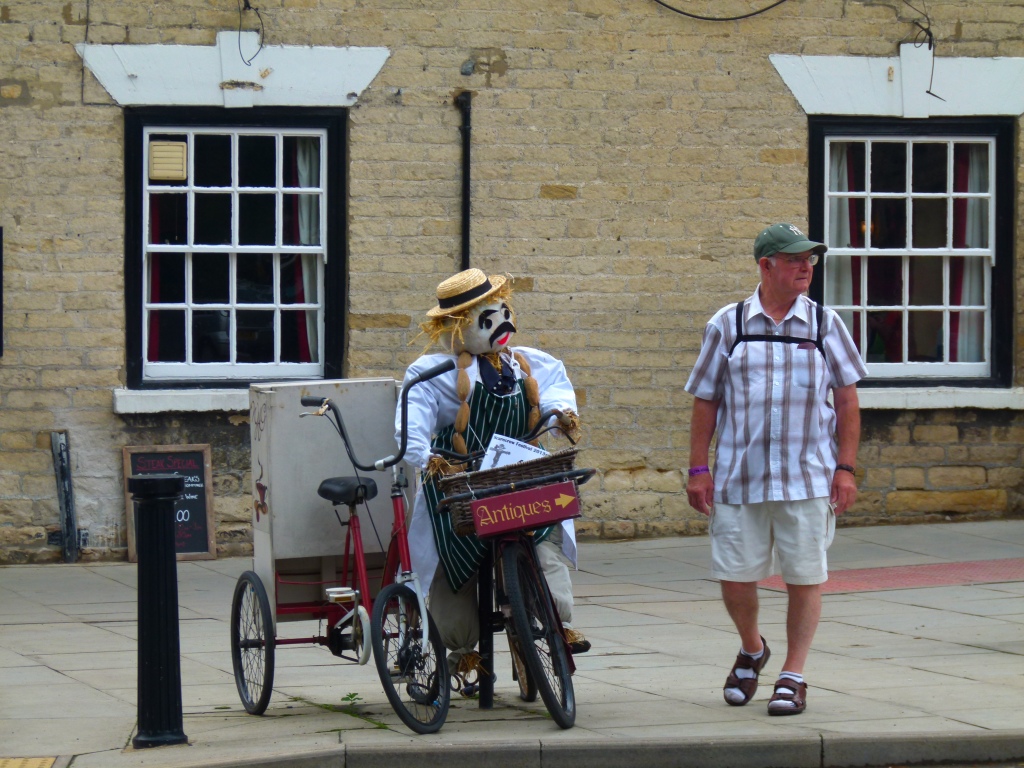 A lady takes tea with the vicar at the tea room, Alice holds her tea party on the sidewalk. A Highwayman is held in the stocks and a vamp in black leans on a lamp post…They must have had such fun making them! 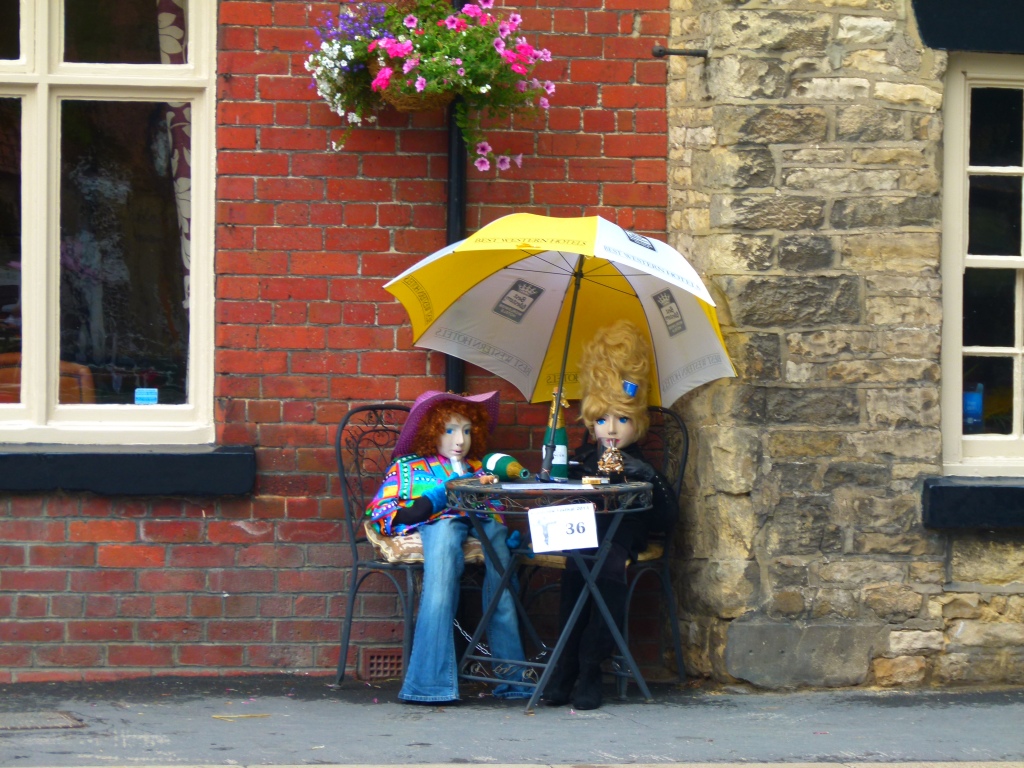 There was, too, a proper bakery… and, being a proper Yorkshire bakery, they had curd tarts. I can’t get them in the south… a wonderful lady shipped me a brace of them recently when I was at a low point and made my day. So it had to be done. Four were neatly boxed and wrapped and destined for lunch. 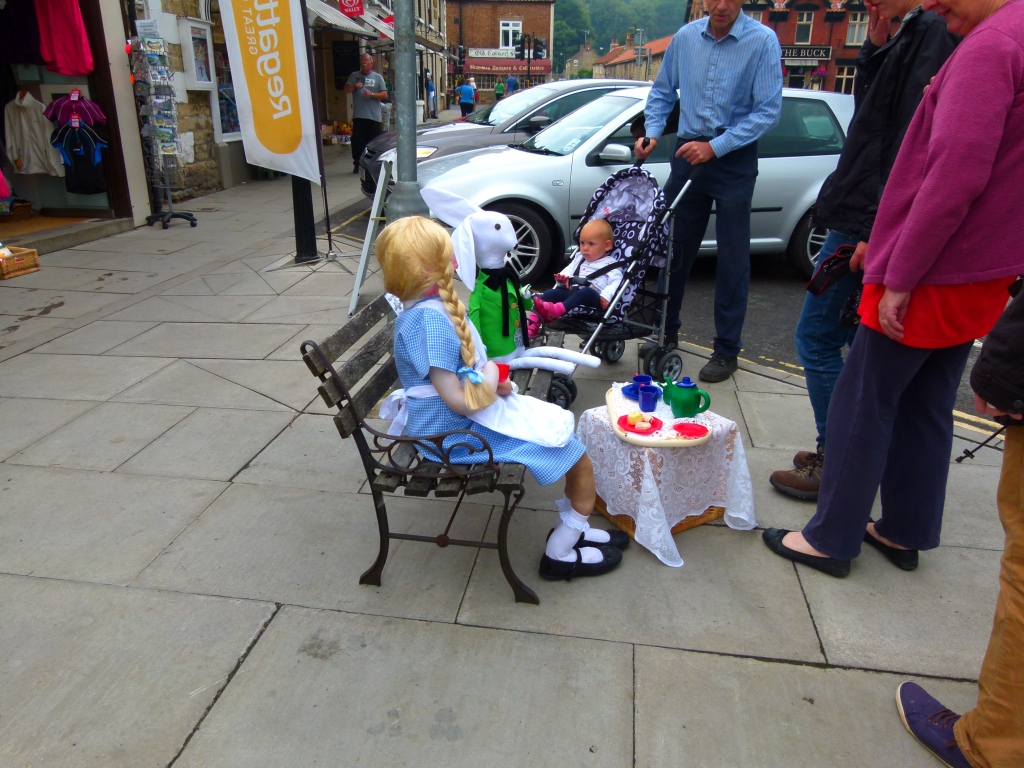 Which wasn’t going to be too long… it was already midday and we hadn’t come anywhere near our first scheduled goal…..but that was okay. As we headed east I looked up and saw that even here we were accompanied by kites wheeling overhead. We were on track. 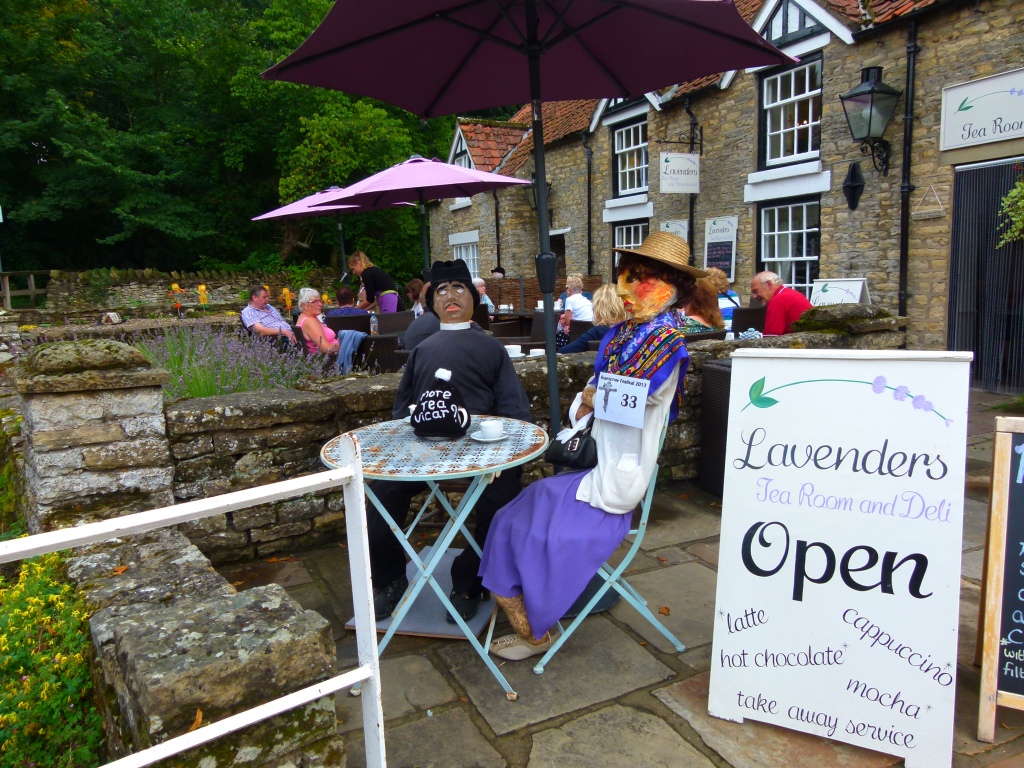 1 thought on “Scarecrows and curd tarts”