There could be no better place to wake than the moors; as the curtains opened on my picturesque ‘birthday card’ and the Cow and Calf brought in the morning. We were planning a long walk after breakfast so our rooms had to be cleared and we were to check out early. First though, a final meal shared in the window table of the old hotel, this time with cards and unexpected gifts. One card, ‘coincidentally’ showing a picture of Aysgarth Falls where Stuart and I had taken the first, tentative steps towards a journey we had not then realised was beginning and which had, one year ago to the day, resulted in the publication of our first book together, The Initiate. 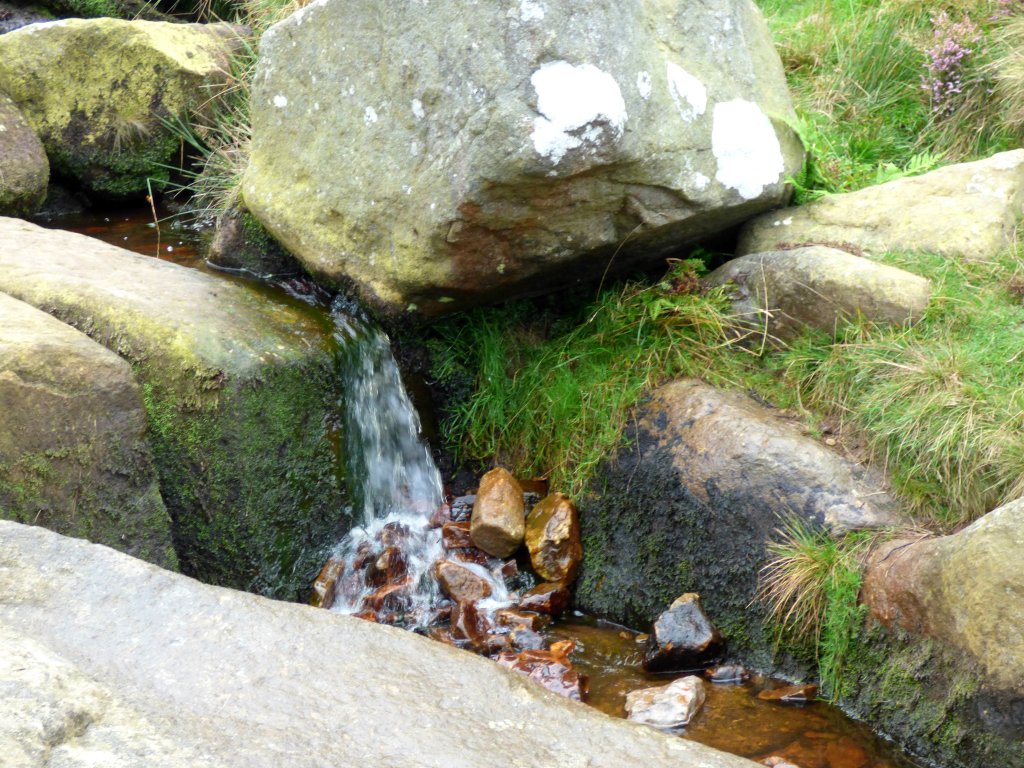 A little while later, cars packed and ready to leave upon our return, we set out across the heather towards Backstone Beck where, for a final time, we drank the golden water of the stream. For me this is a ritual; to take that water into my body is to carry the essence of the moors within. It is also a very special place on a personal level as I have played in this particular stream, both as woman and child. So have my children. So did my parents and their parents. It is more than sentimentality, however; in a very real way the land here gave birth to us and there is a true sense of continuity, of being rooted in the earth from which we take our being, and to that indefinable ‘something’ beyond all that we are. In this place one can touch the divine in every rock, every blade of grass and every bell of heather.

We walked beside the beck to where an ancient carved stone lies enigmatically in the path. We stopped to discuss the possible meanings, uses and reasons for such carvings. There are well over 250 similar megalithic stones upon this small stretch of moor and probably as many theories, but the only thing we can know for certain is that there was meaning; no-one would go to this amount of effort with primitive tools unless the symbols were significant. 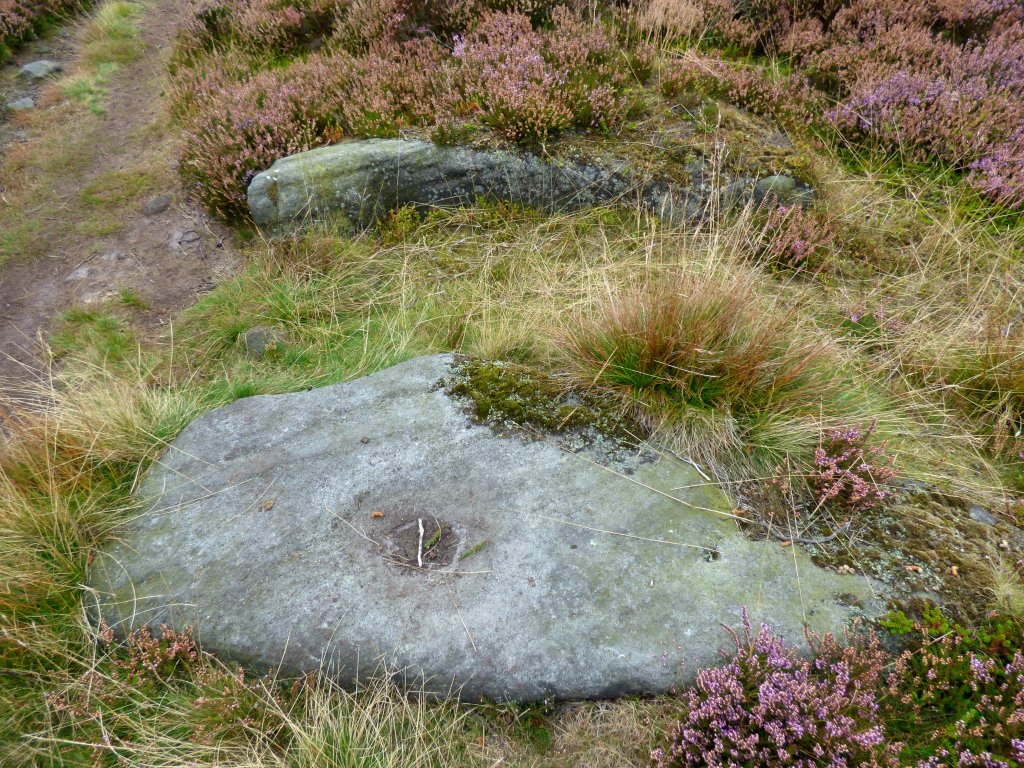 We dowsed the stone with a crystal pendulum, each taking a turn and seeing how the pendulum reacted, noting the differing movements over the various parts of the stone. It is an interesting exercise that anyone can try, regardless of whether you see it as a bit of leftover folk-magic and dowse for the sex of a child with the wedding ring on a thread, or take it to ever more complex and technical heights. For myself I prefer dowsing rods, but these I had left at home. 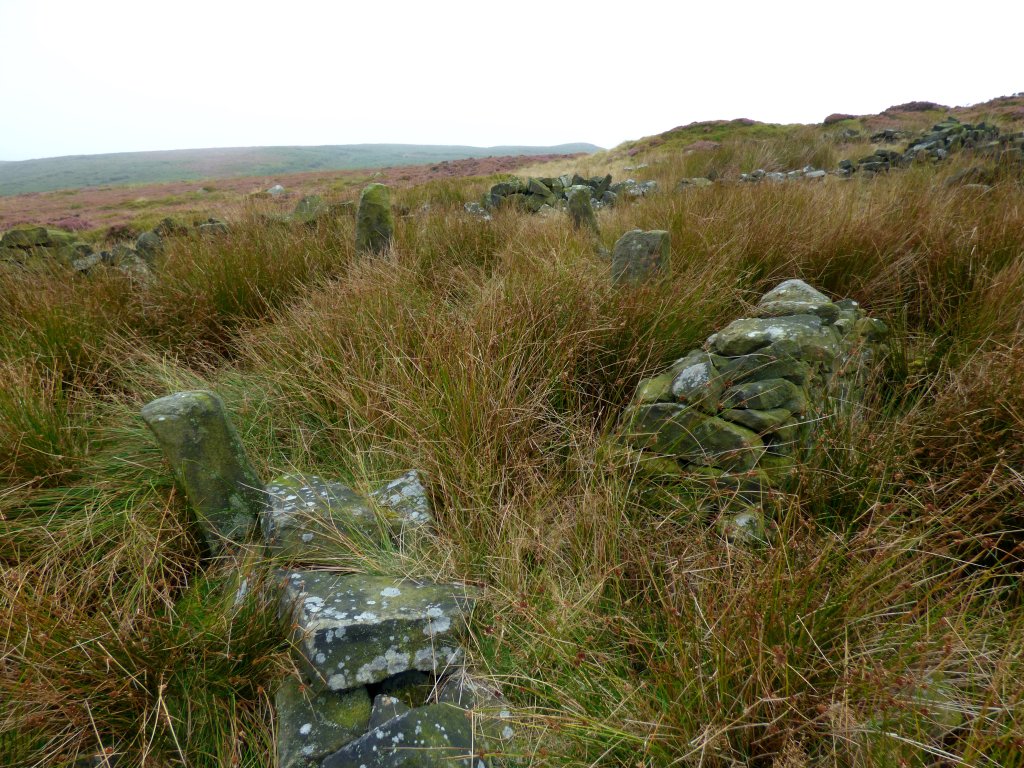 From here we walked through the bracken lined path, always climbing gently, towards Backstone circle. It is an odd place, still in use by local pagan groups to judge by the traces of wax and flower tucked beside the stones. Beneath it a stream runs to a nearby well and behind it a quarried cairn stands open to the skies. The stones themselves may form the remains of a substantial double circle, but the stones have been shifted and disrupted by the presence of later building and the walls now intrude on the circle. Opinions vary… is it a circle at all, or a later ‘fake’ or an ancient place overlaid with more modern activity? Judging by the other features in the landscape I would go for the latter, though the reeds grow within the circle and that, in itself, is unusual…but again, we may never know.

‘Further up and further in’ we went, until we reached a resting place with a post box for poems. We had been here before and rested a while; sharing pieces of writing that are significant to each of us, pieces that picked up on the theme of the weekend. At least two of us were in tears after one reading. Like many other things, this may sound odd, but in that place, at that time, surrounded by the bracken and the wind, it was perfect.

But we still had a way to go before we would reach our destination, so once again we followed the stream to where a carved face marks the crossing into what seems a different landscape.

2 thoughts on “By Backstone Beck”