We followed the stone pavement. To quote one of the characters from Swords of Destiny, it looks “like a gurt, ‘ungry worm” as it snakes across the moors. Stone or not, it is out of place, though undoubtedly safer than the rotting duckboards that once crossed the sphagnum moss here. It does make the place accessible and does protect against erosion, but even so. It feels ‘wrong’… out of touch with the soul of the moor. There are some things where any compromise will be less than perfect. Even here, miles from nowhere it seems as you climb above Lanshaw Delves, the world overlays nature to protect it from itself. It seems both entirely pertinent given the nature of the system we study with the School, and a little ridiculous when we realise that we too do the same thing within our own personalities. Yet, as a symbolic illustration, it is perfect and we are here, after all, to explore how and why these relationships between our inner and outer selves are built.

We pass the Lanshaw Lad, an old boundary stone, and climb the final rise that will take us to the Twelve Apostles stone circle which is our destination. There suddenly seem to be people about. It is, of course, a paved way and popular with walkers. Spotting a couple of interesting stones and what seems to be the trace of an old highway, we wait a while until the circle is clear. Looking back towards the Thimblestones there is movement in the sky… four hawks wheeling! At one point in a perfect circle. The camera is too slow and all I capture are the motes of darkness against the clouds, just enough to show they were really there. But then, that is more than we need. Their presence is enough.

We introduced our companions to the stones of the circle and spent some time in quiet contemplation, taking eternity into the moment. White shawled to signify that this was a time out of time we shared the ancient sanctity of the place, a circle that marks a point between the lands of the living and the dead… a place where the journey is honoured. We keep no secrets in the School, our work is as open to the winds as that circle, but although from respect we do not broadcast all the details, nor do we hide them. Enough to say that we shared the moment and the winds responded. We shared bread and wine and the stones drank with us. We shared laughter and the grouse flew up and echoed it. We shared a good bit more than that apparently, collecting a sizeable congregation of silent onlookers… I had my back to the west and did not see as I led the simple rite… but that was fine too. Goodness knows what they must have thought! But then, they watched with quiet respect and we are not a closed order operating in secrecy; we seek to bring the spiritual life to life and into the world. Where else, after all, can it be lived?

We stood, smiling, as the moment drew to a close, hand in hand around the centre, with arms and bodies forming a natural crown, jewelled with smiles. A crown of Fools, perhaps and I felt blessed to stand amongst them. “Come on, let’s stop the world,” laughed my colleague… and voices rang out from the centre of a circle radiating warmth as they sang ‘happy birthday’ for me, laughing… and sent out joy across the land. 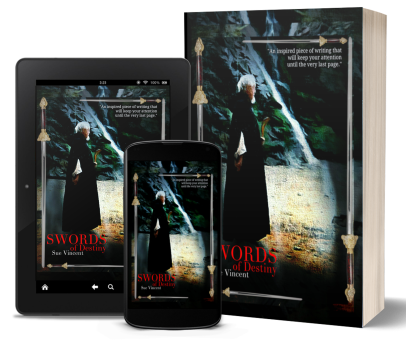 The Garden of Ogmios

An extract from Swords of Destiny

“Welcome to the garden of Ogmios,” said Merlin, his words echoing, whispered by ghostly voices till they faded into silence. “Here, outside of time, he tends the roots of the mountain and grows his home from living rock. Look well, Heart of Earth, for you will not see it’s like again.” Rhea was spellbound by the beauty of the place and could well believe that this spectacular hall had been wrought by art and not mere chance. All the colours of a pigeon’s breast glowed on the graceful curves of the rock, catching and reflecting the golden witch-light.

Rhea had seen the show caves of Cheddar and the deep, silent caverns at Chislehurst, neither of which possessed the vibrancy and vigour of this place. Cheddar’s wedding-cake loveliness was as nothing compared to the

living filigree of stone through which she now walked.

In the centre of the cave, a large central space held a great slab of millstone grit, shaped like a couch with a raised pillar at one end. It reminded Rhea of the altar on the moor which she had touched that first day, save only that this was much larger and had not suffered the erosion of wind and rain.

“Ogmios’ couch,” Merlin explained. “Here he spends the centuries dreaming the shape of his garden and growing his crystals from seed.” He indicated that she should look to her right and she saw a small field of crystal and semi-precious stones laid out in a spiral pattern on the floor. There were huge clusters of amethyst and quartz, glittering pyrites and all the varied hues of agate. One large stone, polished by the dripping moisture from the stalactites above, looked like black glass, frozen around a snowstorm. Rhea was bewitched by its soft sheen and reached out a hand to touch the surface.

“What is this, Merlin? I’ve never seen it before.”

“The world calls it snowflake obsidian. You can see why.”

“Ogmios would be pleased by your appreciation. He grew this as a memento of the first time he saw snow falling. It was at night, beneath a full moon at the dawn of life as we know it today. He thought it too beautiful to allow it to melt away forgotten so he caught the flakes in a stone the colour of midnight and preserved it for eternity.

“Geologists don’t have all the answers,” he chuckled. “They only understand the physical conditions required to produce these crystals. They will never understand that they were first dreamed to capture a moment of beauty which touched the soul of a grotesque giant whose very existence they would deny. Rose quartz was the light of the first dawn, amethyst the clouds of a summer sunset. Agates are all the colours of the autumn earth.”

“And diamond?” asked Rhea, holding out the ancient ring on her finger, which seemed to have woken to life in this place.

“Starlight in frost,” he smiled. Rhea nodded, humbled and grateful for the deeper understanding of the forces of the world that guided her. She had begun to see the life innate in her surroundings and with that privilege had come a renewal of wonder and respect.

“Come, child, the others will be worried, although Ogmios may have told them that you are safe.” His face lit with unholy glee, “In fact, if they have met my friend, they will probably be more concerned than they were before! This way!”

Merlin led Rhea through the scintillating garden of living rock towards a shadowy opening at the end of an avenue of slender columns ablaze with mica. Rhea turned before entering the tunnel to take one last look.

“I could never have imagined that so much beauty lay hidden in the earth beneath my feet. It feels right, though, somehow. I can feel the life in the stone. If I knew how to listen, I think I could hear them whispering all the secrets of the underworld.” She turned away. Another unforgettable memory adding one more reason for her reverence of the earth upon which she walked.

Available in paperback and for Kindle via Amazon

“…and the swords must be found and held by their bearers lest the darkness find a way into the heart of man. Ask the waters to grant guidance and tell the ancient Keeper of Light that it is time to join battle for the next age.”

Rhea Marchant heads north to the wild and beautiful landscapes of the Yorkshire Dales where she is plunged into an adventure that will span the worlds. The earth beneath her feet reveals its hidden life as she and her companions are guided by the ancient Keeper of Light in search of artefacts of arcane power. With the aid of the Old Ones and the merry immortal Heilyn, the company seek the elemental weapons that will help restore hope to an unbalanced world at the dawn of a new era.

“…a beautifully magical story… An inspired piece of writing that keeps your attention until the very last page.”

“Robed in rainbows, like moonlight on water, FAB. I didn’t so much read this book as eat my way through it…“