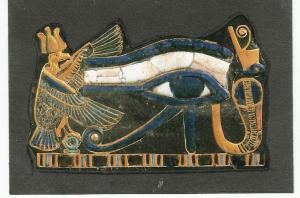 “You know of what I speak, Gandalf.

I recall struggling to formulate this image when first reading Tolkien’s masterpiece.

an incredibly ‘difficult’ adversary to picture.

of making the image real and sufficiently menacing.

But what of the symbolism?

What can it mean that Sauron only ever appears as an eye?

From a psychological perspective the Eye of Sauron

can be regarded as signifying the Super Ego.

The Super Ego is a manifestation of all those ideals

and authority figures that the Ego seeks to impress

in order to justify its existence, and look and feel good about itself,

but is ever doomed to fail to impress because those ideals

are as empty and groundless as the Ego itself,

being ultimately, themselves, projections of that Ego.

“What news from Mordor, my Lord?

What does the Eye command?”

of the Ego to satisfy those demands recall the sweet maid in the rhyme, ‘Soldier Soldier…’

What the Ego needs to do, instead of trying to obey the Super Ego,

is to listen to, and act upon, the promptings of the Id.

The Id is the inner child of wisdom which the Ego initially develops to protect.

Once fully developed the Ego conveniently forgets the reason for its development.

Perhaps that is also why Tolkien chose Hobbits as his heroes?

“They would only be small.

The Eyes of Horus are not the Eye of Sauron.

They recognise only the Id-entity…